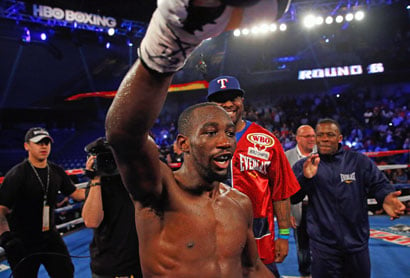 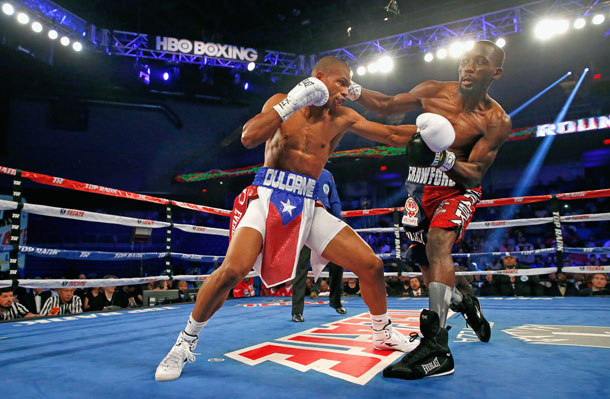 Terence Crawford: Crawford demonstrated again that he is among the best of an exciting new generation of fighters. The proud Nebraskan turned in another in a series of dynamic performances on Saturday night in Arlington, Texas, knocking out capable Thomas Dulorme in the sixth round to win the WBO junior welterweight title. Crawford patiently measured his Puerto Rican opponent for the first five-plus rounds and then lowered the boom, a big straight right that put Dulorme down for the first of three times that abruptly – and dramatically – ended the fight. One word describes the performance and the past few years of his increasingly important career: WOW! If Crawford (26-0, 18 knockouts) has a weakness, it isn’t obvious. The only thing I wonder about is his chin after he was stunned by a punch from the smaller Yuriorkis Gamboa in June of last year but, honestly, I’m reaching. I think Crawford has the skills, power, toughness, poise and everything else it takes to remain atop the sport for a very long time. He also has the X factor of a true star, a magnetism in the ring that makes him a must-see attraction for all boxing fans. I know I’m not alone when I say I can’t wait for his first title defense in the deep 140-pound division.

Julio Cesar Chavez Jr.: Junior is 29 and has lost only twice, which all but guarantees he isn’t finished as a fighter. The future doesn’t look good, though. Chavez (48-2-1, 32 KOs) hasn’t shown us much of anything since he stopped Andy Lee in June 2012. He had the dramatic 12th round against Sergio Martinez and two so-so victories over so-so Brian Vera, after which he was out of boxing for 13 months. The image in our heads now – after a brutal ninth-round knockout loss to Andrzej Fonfara on Saturday in Carson, California – is a badly beaten fighter who was demoralized in front of devoted fans. It was the worst night of his boxing life. Now what? One, he suggested he would go back down to 168 pounds after engaging Fonfara at a catch weight of 172. Good idea. He obviously needs his size advantage against good opponents. Two, he needs to focus, which has always been a challenge for him. He must devote himself 100 percent to his training if he is to have any hope of remaining relevant. And, three, his handlers will have to pick his opponents carefully. Julio Chavez Sr. warned against facing Fonfara, who was better than Junior in every way. It will be a tough road ahead for the popular Mexican.

Lucas Matthysee: I believe the scoring for Matthysse’s fight against Ruslan Provodnikov on Saturday in Verona, New York, was spot on. One judge had it 114-114 but the other two scored it 115-113 for Matthysse, giving him a majority decision victory. I scored it 115-113 for Matthysee but a draw was reasonable, as Provodnikov clearly rallied in the late rounds. That doesn’t mean that Matthysse didn’t have a strong night, though. He did. Imagine you’re fighting a beast who takes the biggest shots in your arsenal, never gets hurt and just keeps coming at you. That’s Provodnikov. Matthysse not only was able to survive, he outboxed and outworked one of the best 140-pounders in the world to claim a well-deserved decision. That’s a good night by any standard. Matthysse (37-3, 34 KOs) said afterward that he would love to face the winner of the May 2 Floyd Mayweather Jr.-Manny Pacquiao fight for the same reason as everybody else: the windfall. That’s a long shot but I think he’s earned it. His victory over Provodnikov was only the latest in a number of entertaining fights that have made Matthysse one of the most popular fighters on the planet.

Andrzej Fonfara: Those familiar with Fonfara gave him a good chance of beating Chavez because of his track record – including a close loss to Adonis Stevenson in May of last year – and size advantage. I don’t think anyone expected the Pole to dominate to the extent he did, though. It was obvious from the opening bell that Fonfara was too good for Chavez, who fought hard but ultimately had no answers for the light heavyweight contender’s quick jab, hard, rapid-fire combinations and impressive work rate. Fonfara put a tired, already-beaten Chavez on his butt with a left to the chin late in the ninth round to punctuate the most striking performance of his career. The Mexican survived the round but was finished. He didn’t come out for the 10th round, giving Fonfara (27-3, 16 KOs) an important victory that keeps him in the thick of the light heavyweight picture. He wants a rematch with Stevenson, THE RING champion, which makes sense given the competitiveness of their fight in May of last year. If that doesn’t work out, he has proved beyond doubt that he’s a legitimate opponent for any of the top 175-pounders.

Ruslan Provodnikov: Provodnikov (24-4, 17 KOs) is resilient during and after his entertaining fights. The rugged Russian gave another top-tier opponent all he could handle only to fall just short again, the third time in his past five fights that he lost close, frustrating decisions in important fights. He brought Tim Bradley to hell and back but left the ring disappointed. He took Mike Alvarado’s WBO 140-pound title only to lose it to relative unknown Chris Algieri in another fight he thought he won. And then, on Saturday, one more narrow setback left him crestfallen. The good news for him is that he has proved that it’s OK to lose as long as you’re competitive and leave your heart inside the ropes. That’s Provodnikov, whose name has become synonymous with action. After the decision was announced on Saturday, he apologized to his supporters for losing. He should know that he has nothing to apologize for. He gives fans what they crave every time he fights. And he did nothing to diminish his stock. He remains a viable opponent for any junior welterweight.

Amir Imam (17-0, 14 KOs) might’ve been the second best fighter in action on Saturday night, after Crawford. The young contender gave Walter Castillo (25-3, 18 KOs) a boxing lesson on the Fonfara-Chavez card in spite of the determined Nicaraguan’s incessant aggression to win a one-sided decision in a 10-round junior welterweight bout. The scores were 100-90, 99-91 and 98-92 for Imam. I scored it 99-91. Imam, like Crawford, seems to have all the tools. I don’t know if the New Yorker can compete with the best 140-pounders yet but he’s not far away. ÔÇª I didn’t like the way Imam handled himself after the final bell, when he got into Castillo’s face as the loser attempted to congratulate him. “I don’t know what he said but it didn’t sound classy,” Castillo, who doesn’t speak English, said through an interpreter. It wasn’t classy. I understand that Castillo did his own trash talking before the fight but pre-fight comments are usually forgotten once the fight is over. Hopefully Imam learned a lesson. ÔÇª Middleweight contender Tony Harrison (21-0, 18 KOs) is a very good fighter, much too good to share the ring with the likes of Pablo Munguia (20-7, 11 KOs). Harrison stopped the Mexican 11 seconds into the third round Friday in Uncasville, Connecticut. A scan of Munguia’s record indicates that he has been competitive against decent fighters but I saw a crude club fighter who is 36 going on 60. Still scratching my head over this one. ÔÇª I can’t figure out how judges Steve Weisfeld and Don Trella scored the Danny Aquino–Ryan Kielczewski fight on the Harrison-Munguia card 6-2 in rounds for Aquino. The Mexican was the aggressor but Kielczewski countered well and seemed to me to land more and cleaner punches. I scored it 5-3 in rounds for Kielczewski (22-1, 6 KOs).