Inside the spectacle known as the Mayweather Media Workout 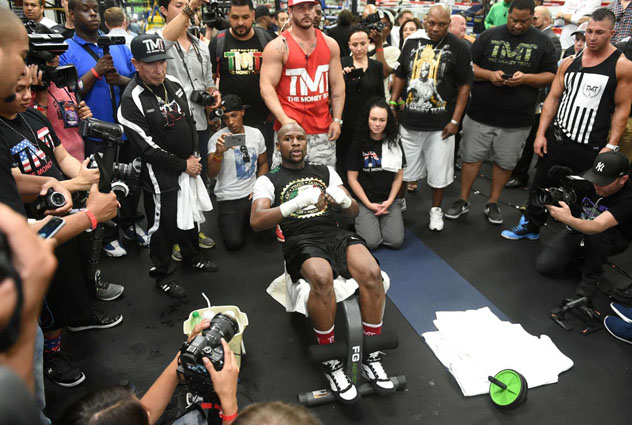 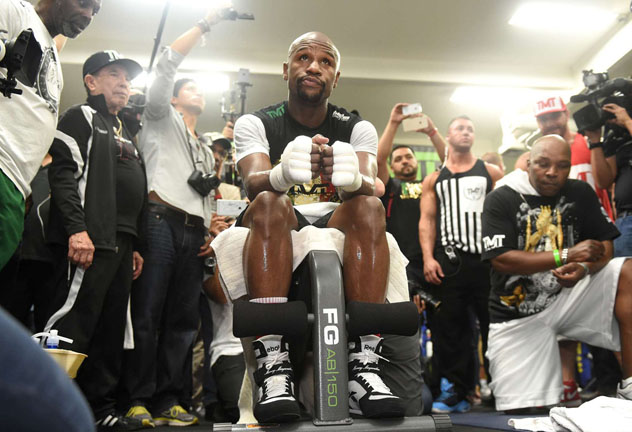 Floyd Mayweather Jr.’s media workout has become a special attraction for the press that officially puts the gears in motion as we head toward fight week. This writer has been a part of the Mayweather experience since the pound-for-pound king faced Ricky Hatton in December of 2007. Nine fights and seven years later, the event that takes place approximately two weeks before the two-time RING Magazine “Fighter of the Year” steps into the ring is still a necessity for any sportswriter looking to capture a glimpse of the five-division world champion. You never know who you may encounter at the gym. From the various celebrities that do their best to blend in with the crowd to the gorgeous women who provide a little eye candy in the midst of a sweaty testosterone-filled dojo, there’s always something to talk about after spending your day at the Mayweather Boxing Club.

The media workout that precedes Mayweather’s highly anticipated (and long anticipated) showdown with Manny Pacquiao was a spectacle that goes beyond the rudimentary watch-him-workout-and-ask-questions media obligation that is expected.

This was something like a big deal. And if it is an early indication of the kind of madness that we should expect in Las Vegas on May 2, you had better brace yourself. 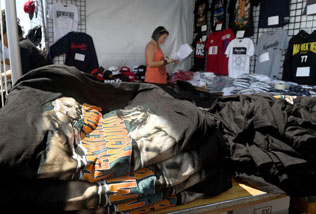 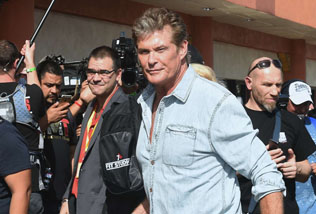 Upon arriving at 2:30pm PST, you couldn’t help but notice a massive tent that peddled The Money Team paraphernalia stationed outside the gym along with a second tent that was erected in the middle of the parking lot with four rows of seats for special media members. There was a catering tent with refreshments and food as well. A number of high-profile cars were littered throughout the lot while Mayweather fans gathered to capture a glimpse of boxing’s cash cow.

With a scheduled 4 p.m. arrival (which Mayweather never meets), there was time for writers to pull aside the likes of Floyd Mayweather Sr., Roger Mayweather, Leonard Ellerbe and various other members of TMT. WBC junior featherweight champion Leo Santa Cruz, who had just been announced as a participant on the undercard of Mayweather-Pacquiao, could be seen fielding questions from various journalists. Kelly Swanson, the publicist for Mayweather, was directing traffic and doing her best to keep the swelling mob of media content until the arrival of Mayweather.

At approximately 3:45 p.m., the mother of Mayweather’s teenage daughter, Melissia Brim, pulled up in a Rolls Royce and exited the vehicle decked out with what you can only imagine to be a pricey outfit decorated with equally expensive jewelry. Shortly after that, rapper Lil Kim was spotted walking through the doors. Over by the lunch spread, “The Hoff,” yes, David Hasselhoff was milling about and taking photos with fans who were surprised to see him.

At 4:30 p.m., a jet-black suburban pulls up to the gym and Mayweather, wearing a t-shirt with his image illustrated with the colors of the Philippines and the giant yellow sun surrounding his head, a black TMT hat with the words in an American flag pattern, black socks and a pair of yellow flip flops on his feet, emerges from the vehicle. Photographers race toward Mayweather as if he were President Obama but the massive security team known as “The Great Wall” imposes its will and keeps them in check. 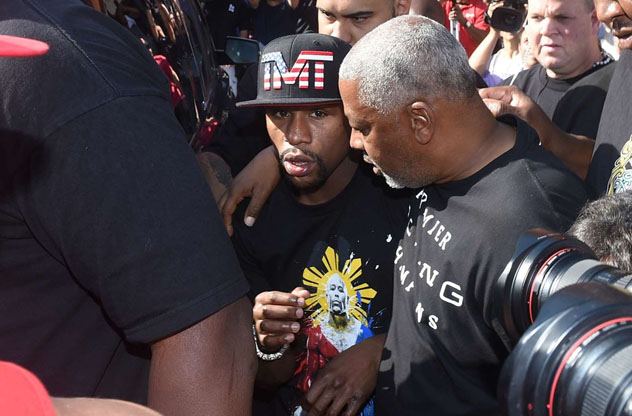 Normally, upon arrival, Mayweather heads into the gym and enters into a scrum with media. But considering that this is not your usual workout circus, the action takes place press conference-style underneath a tent. Select media members are seated where they can ask questions while everyone else piles into the tent to get a look at Mayweather, who is flanked by Leonard Ellerbe and Leo Santa Cruz. Mayweather gives answers in his typical fashion, with the most poignant being one where he compares his boxing career to that of a journalist who is always looking for ways to improve upon his craft. “You study and try to come up with different questions that you can ask in a way that nobody else has asked before to set you apart,” Mayweather says with a hint of irony aimed at the writers who lob a mundane set of questions at the 47-0 fighter. The result: a lot of nothing.

The further irony of these media workouts is the fact that journalists rarely get anything significant from the unbeaten champion. As masterful of a defender he has been, he’s just as good at avoiding questions that are little more than landmines planted to produce sound bites. He’ll often rifle off the phrase “Like I said before ÔÇª” and roll into his statement because, in all actuality, he probably has answered that question in some way, shape, form or fashion that he feels is relatively conclusive. If he really feels like giving you details, he will. Otherwise, he’s a well-oiled machine that is great at slipping inquiries.

In all honesty, after you’ve been to a couple of these workouts, you can pretty much predict the answers that Mayweather will deliver. All you have to do is wrap some quotes around it to officially attribute the words to the fighter formally known as “Pretty Boy.” Anything you want to know about how the fight will play out will be met with “I don’t know ÔÇª we’ll see.” He’ll incessantly remind you that he is blessed and has an amazing team. His training camp is always amazing and his outside life is completely off limits. He’s like a slot machine because if you catch him at the right time and with the right question, he’ll give you something special. Today is not one of those days.

Really, it is more about the experience than getting your questions answered in a way you haven’t heard before (Like he hasn’t heard some variant of the question “Are you excited for this fight?” already).

For those who have attended a Mayweather media workout, you become accustomed to the surrounding madness. You know that Mayweather is going to work out for no less than a mind-boggling three hours. You also are aware that there may be a chance that he’ll field questions while he gets his hands wrapped. Or, if you are lucky and have the endurance to hang around long enough, he’ll speak to you when his workout is completed. But to withstand several hours of Mayweather working out in the sweltering confines of the Mayweather Boxing Club is a challenge in itself. You have to be like a boxer who seeks an opening, is conditioned to go the full workout and isn’t overly aggressive. Otherwise, you’ll be figuratively knocked out of the gym by Kelly Swanson, Mayweather’s security team or, in extreme instances, by Mayweather himself. Be patient, pick your spots well and make them count.

Mayweather retreats to the gym as winds pick up in the Las Vegas Valley and threaten to blow the entire tent into the desert air. A staggering number of journalists and people with no business in the gym, but managed to sneak their way in, follow Mayweather like the Pied Piper. The Mayweather Boxing Club is stuffed with people. Lil Kim has taken a seat near the corner of the large ring. Roger Mayweather is seemingly in a trance on a nearby couch and hasn’t moved for roughly two hours. Floyd Sr. is his usual boisterous self as he explains why his son will knock the Filipino out cold on May 2. 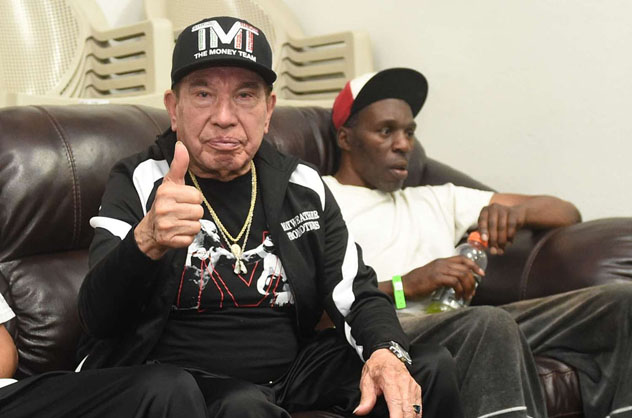 Those journalists who are familiar with the routine strategically place themselves in spots that they know Mayweather will eventually be: on the ring apron, near the heavy bag and by the speed bag. The man who calls himself TBE does another round of interviews with television, retreats to his locker room and emerges minutes later ready to work out. The man responsible for taking care of Mayweather’s once-brittle hands, Rafael Garcia, takes care of the wraps with no journalistic inquiries allowed while the music is turned up to a mix of 80s hits from Phil Collins, Zapp & Roger, Mtume and Hall & Oates. Lil Kim bops in her seat alongside some Mayweather beauties and the champion steps into the ring gnawing on a large piece of bubble gum.

Roger Mayweather finally rises and puts on the mitts for Mayweather’s now-infamous mitt routine. Assistant trainer Nate Jones dons the body pad and Mayweather rips into the giant with hard body punches. With no rest, he races to the heavy bag to slug it around before skipping over to the speed bag. He’ll then hit the ground for sit-ups and do it all over again. He’ll also jump rope, do some weighted shadow boxing and some neck raises. The pace that he does these exercises is mind-blowing as he goes nonstop for nearly two hours. For the regulars, this is standard fare. But for the writers and videographers new to the Mayweather regime, their eyebrows collectively raise and constant inquiries regarding how long he can go are being mumbled to one another. 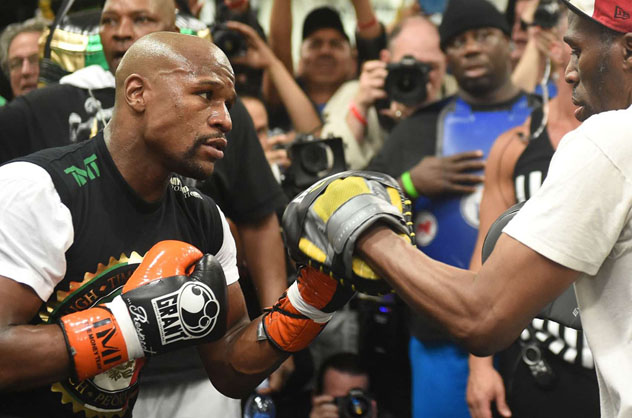 After all, this is supposed to be for show, right?

Wrong. As much as Mayweather might troll people for attention outside of the ring, nothing Mayweather does when he is inside of that gym is “for show.” A workout is a workout, whether we are there or not. Perhaps that is why he is unbeaten and still going strong at the age of 38. He takes his craft very seriously. Not a moment is wasted and his eyes are never off the prize. He admits that boxing isn’t fun to him anymore and is viewed as a job. Well, not just a job, but a well-paying career that he will do to the best of his ability and after one night’s work take home a check with more zeroes than the average man would see in several lifetimes.

There’s no time to play and you’ll have to keep up with him, not the other way around.

Photographers scurry from station to station in order to keep up with the champ, some sweating more than Mayweather. Team Mayweather looks on while security does its best to keep the swarming media from suffocating his workout. Some writers begin to filter out as the heat inside of the gym becomes unbearable and the evening wears on.

And then, after a round of sit-ups, Mayweather abruptly stops and darts into the locker room with no warning.

Several lingering journalists who are hoping to get a private session with Mayweather are shut down as they are informed that the 38-year-old will be doing his final interview of the day with Showtime Sports’ Jim Gray. It’s now 7:45pm and a brisk wind clips at the leftover people who were hurried out. For most, the 5 or so hours spent at the Mayweather Boxing Club produced little more than a few choice quotes. But the spectacle of it all is what will be remembered when Floyd Mayweather Jr. finally tips his hat and rides off into the sunset. Love him or hate him, he has made boxing a big deal. Mayweather vs. Pacquiao will be one for the ages and is rightfully being called the Super Bowl of boxing.

One writer, who is new to the Mayweather media workout, sums it up nicely.

“I had to experience it once because we may never see anything like this again.”

And you know what? He’s probably right.