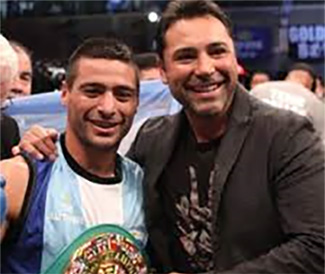 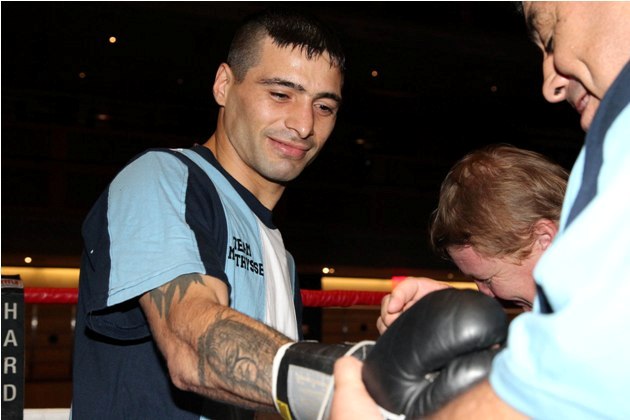 BUENOS AIRES – A recent reshuffling of the rich junior welterweight and welterweight talent pool ended up scattering some of the most talented fighters of the division in the hands of bitterly divided promotional companies. On paper, Golden Boy Promotions appeared to have grabbed the shorter stick in the draw, but the company’s president is banking once again on the rise of a dark horse that could end up taking the 140-pound division by storm.

And he was recently willing to travel to the other end of the world to support this notion.

“Lucas is a great fighter, and I believe in him a lot,” said Oscar De La Hoya during his first visit to Argentina in 19 years, in support of Lucas Matthysse (36-3-0-1 ND, 34 knockouts), who will face Ruslan Provodnikov (24-3, 17 knockouts) on Saturday, in what De La Hoya sees as a possible game changer for both his fighter and his company.

“This fight is very special for him, but I believe he will have a very tough opponent,” said De La Hoya, now at the forefront of his company after the exit of his long-time CEO Richard Schaefer and the loss of a number of his fighters at the hands of adviser (and Schaefer cohort) Al Haymon. “But I think this fight will put Lucas under the spotlight at the highest level in boxing. If Manny (Pacquiao) beats (Floyd) Mayweather, then Matthysse could end up fighting him, which as a fan is a dream matchup for me. But for that he will have to continue winning. That’s his job. If he wins this fight, big things will happen for him.”

Plotting a master plan for Matthysse, one of the most avoided fighters in the division, to rise to the top of such a competitive weight class will prove a daunting challenge. But De La Hoya sees the hard way as the only way to reach that level, and he’s ready for the gamble.

“You force them,” said De La Hoya, when asked about how you get the best talent in the division to get in the ring with a fighter like Matthysse, who has sent every single one of his opponents (with the exception of Danny Garcia) to the canvas at least once, win or lose. “You give the public the fights they want to see. In the case of Provodnikov it was easy because he is a warrior, he is an old-school fighter, a brawler. It’s difficult, but we have to position Lucas for the big fights by winning all the time and getting mandatory fights.”

Matthysse doesn’t have to look very far for a blueprint for success. He just has to look at the trail blazed open by his childhood buddy Marcos Maidana. And De La Hoya believes some of that mojo may have finally rubbed off on Matthysse.

“I believe Lucas is knocking on the door already,” he said. “He almost knocked the door open against Danny Garcia. Lucas has to force other fighters to face him. It’s tough on the promoter, takes a little bit more time, but I am confident that the big fights will come.”

Another big fight that has been signed recently soon is mentioned as another example of what Matthysse needs to happen in his career.

“I believe (Mayweather-Pacquiao) was signed because Mayweather had no more options,” said De La Hoya, regarding the May 2 mega-bout. “Pacquiao put some pressure, but the most important thing was the pressure of the public, the fans. Mayweather had no other chances. So as a promoter I understand that mindset, of seeing a fighter being cornered and having to make a fight.”

Sometimes, the pressure can come from a more friendly approach. And that’s what De La Hoya attempted when he finally decided to unilaterally bury the hatchet in his dispute with his former promoter Bob Arum and telephoned him point blank to restart their relationship.

“When I called Arum for the first time after years of being apart, I had to talk to about five secretaries and employees before talking to him, because no one believed I was actually calling him,” he said. “And we talked again, because our goal is to give big fights to the public, and we cannot do it separately.”

MATTHYSSE: “IT WOULD BE GREAT TO FACE THE WINNER”

Throughout the event, Matthysse was his usual laconic self, but he did support the idea of eventually facing the winner of the May 2 bout.

“Provodnikov is a tough opponent, but he also has an attack style that I don’t believe he’s going to change overnight,” said Matthysse about his most immediate challenge. “We will have to work with our jab and keep him at bay, earning his respect from the very first round. And then it would be fantastic to face the winner of the Floyd-Manny fight. If I had to pick an opponent, it would be him. It would be awesome for me.”

De La Hoya, however, provided a few more names to the list of possible opponents.

“Maybe Juan Manuel Marquez would be someone Lucas could be challenging after this fight,” he said. “We would have to wait and see.”

Along with his matchmaker Eric Gomez, De La Hoya also threw his full support on one of the company’s newest additions in Marcelino ‘Nino’ Lopez (31-1-1, 16 KO), a once-beaten member of the stable of Mario Arano, Matthysse’s long-time advisor. The company plans to continue looking closely into local talent, and a few names such as Juan Bonanni and others were mentioned as possible signings in the future during the press conference attended by over 300 local members of the media.