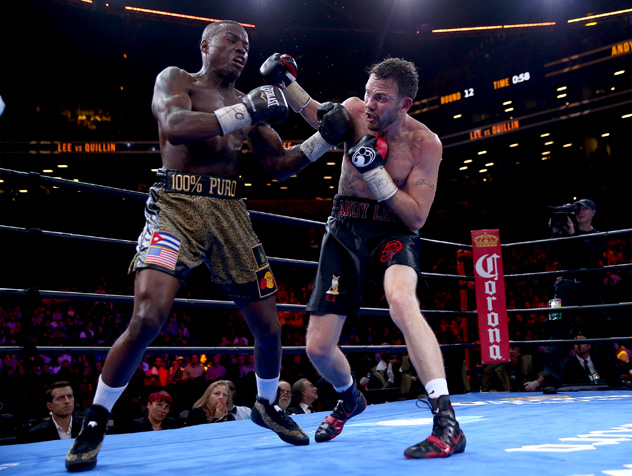 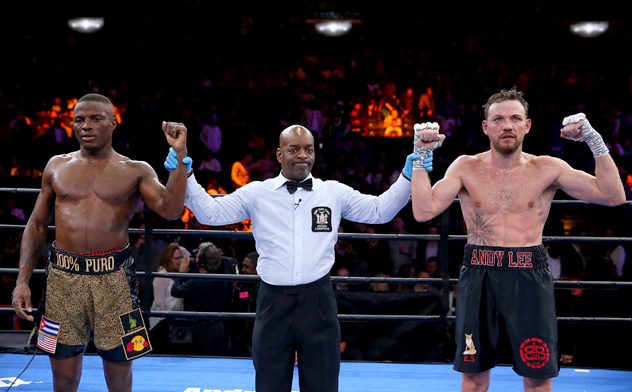 BROOKLYN – In the end, it left more than a few at ringside shaking their headsÔÇöand wanting more. But the way it was going, it was understandable that Andy Lee and Peter Quillin fought to a 12-round draw in a non-title middleweight fight on Saturday at Barclays Center.

Early on, it was “Kid Chocolate” who was the dominating fighter. In the middle-to-late rounds, it was the courageous, thick-skulled Lee, who overcome two knockdowns within the first three frames and the fear that the fight would be stopped after six, who held sway.

Though Lee, who scored a knockdown in Round 7, and Quillin didn’t settle anything, one thing is certain: Neither of them seems ready for Gennady Golovkin, THE RING’s No. 1-rated middleweight.

There had been something boiling over the last 24 hours for Quillin (31-0-1, 22 knockouts). It was that pit-in-your-gut feeling he couldn’t escape.

Quillin was angry. Fuming at himself for his blunder. Quillin didn’t make weight against Lee, the WBO middleweight titlist. Quillin had hopes of regaining the title he had vacated when he failed to meet the WBO-imposed deadline to fight mandatory contender Matt Korobov last September.

It gnawed on Quillin that he got a bad knock for backing away from Korobov. It vexed him some more when he initially weighed 161.4 pounds on Friday for the title shot at Lee (36-2-1, 24 KOs), who beat Korobov in December to claim the title Quillin relinquished.

Quillin’s frustration lashed out in the first. With a partisan crowd chanting “An-dee Leee, An-dee Leee, An-dee Leee,” Quillin stopped it by dropping Lee the first time with a perfectly placed right hook that caught Lee on the jaw just as he was leaning into Quillin. In the third, Quillin decked Lee again with a right square in the chest that was impactful, but also caught Lee slightly off balance.

In the seventh, with Quillin seemingly in control, Lee livened things up when he knocked down Quillin. There was some concern between the sixth and seventh rounds that the fight may have been stopped. Lee’s left eye had been growing discolored and swelling. But the ringside doctor felt Lee was able to continue.

Then Lee proceeded to drop Quillin for the first time in his career. Kid Chocolate shook his head and rose with a smirk on his face, almost as if to convey it was a freak occurrence, nothing more. The two engaged each other again, stalking until the final bell.

After a look at the numbers, a draw seems feasible. Lee landed 113 of 299 punches, for 38-percent. Quillin connected on 103 of 267 punches for 39-percent. Lee threw 134 jabs, landing 37 (28-percent), while Quillin threw 122 jabs and landed 24 (20-percent). It’s a wonder there were any jab stats availableÔÇösince both were loading up looking for the one-punch knockout.

That’s where the telling stats surface. Again, not much difference between them.

“There’s a reason why judges are judges, they see it their way,” Quillin said afterward. “I respect the decision. There is a first time for everything. I’m grateful that I was going to get dropped that I was able to get back up and fight. I came here to fight and I was able to go 12 rounds. I could have kept going. I took a year off, and the motivation of losing my title got me going.”

Lee is open to a rematch.

“It was a tough fight,” Lee said. “He got me early, because I was being lazy. I got my momentum late in the fight because I boxed consistently. I understand with two knockdowns people felt he won the decision. I could have done better tonight. If my next fight is Peter Quillin, so be it. It should be in Ireland, because he has an Irish last name and maybe he can find some ancestors there.”