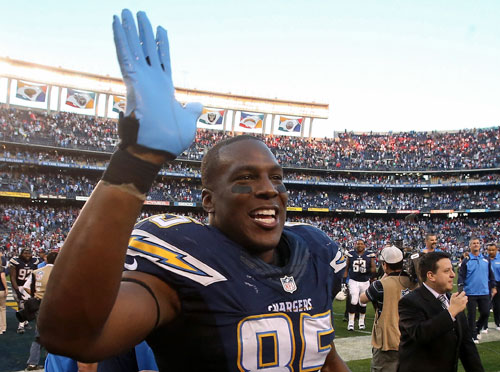 The death of Emanuel Steward in 2012 created a giant void in the Detroit boxing scene, leaving some young fighters from the area without the guidance and pathway to success once provided by the great trainer.

The All-Pro tight end and future NFL Hall of Famer from the San Diego Chargers is recognized nationwide for catching passes from quarterback Philip Rivers. Less well known are his connections to boxing.

Gates, born and raised in Detroit, grew up around the sweet science. His late grandfather Henry Hank, also from Detroit, was a light heavyweight contender in the 1960s whose loss to Joey Giardello in 1962 was THE RING Magazine Fight of the Year. And Gates’ cousin Tony Harrison is a rising middleweight today.

“I come from a boxing family,” Gates told THE RING. “We all gravitated to boxing as kids. I did other things, basketball (at Kent State) and football, but I always had a passion for boxing. I enjoy it today. It’s my No. 1 sport to watch.”

Gates has taken it a significant step beyond just watching, though. The 34-year-old, whose NFL career is winding down, has stepped into the void in Detroit as a promoter in an effort to provide young boxers with direction.

A.G. Promotions, Gates’ new company, is promoting its second card Friday at the Masonic Temple in Detroit. The star of the show is unbeaten welterweight prospect Ron Austion, who cut his teeth in boxing under Steward at the Kronk Gym.

“After Emanuel passed away, I sensed a void,” Gates said. “ÔÇª And the timing is right for me. I’m in the last stretch in my career in football. I want to have an impact in my city. Ultimately, when I thought about my legacy, I want to say I helped kids other than just football players.

“I want to give them a platform to explore their talent and be seen.”

Gates plans to sign fighters and stage cards in cities throughout the country but is focusing primarily on his hometown, which remains in the throes of an economic decline.

He has signed only four fighters so far, led by Austion, but he already has provided many Detroit products a showcase and income. For example, all nine fights on the card Friday include at least one local boxer.

“These kids are starting to hear about A.G. Promotions,” Gates said. “They’re hearing that we’re doing cards in Michigan. They just want to fight, to display their hard work. They want to say, ‘Look Ma, I have a fight this weekend.’

“They want support, encouragement. No one in that region is doing anything for these fighters.”

And Gates wants to go a step beyond most promoters: He plans to advise his fighters on how to make the most out of the money they earn.

Gates said he learned firsthand about the dangers faced by na├»ve fighters in a shark-eat-shark business.

“I know what my grandfather went through ÔÇª making money and then having promoters take money from him,” said Gates, who has become a multimillionaire playing in the NFL. “ÔÇª I want to teach the kids about finances, about how to save money. So many kids make money and don’t have the structure to do the right things with the money.

“I want to bring a different element to the game, to try to teach the fighters about life in general and the boxing game. It can be different. No more horror stories.”

There’s one catch, though: Gates won’t work with just any fighter. He wants to sign young men with character, the type who are disciplined both in and out of the ring.

“I want to structure the business around guys who (have my values),” Gates said. “The fighters I sign – guys like Ronnie Austion, Damien Vazquez, Robert O Quinn and Jarico O Quinn, the twins – I find guys who have the same values. They’re not knuckleheads. They don’t fight one day and smoke cigarettes the next day. I want to meet the kids, talk to their parents, get to know them.

“I’m not saying they have to be perfect. Detroit is a rough city. Overcoming adversity in that city is the No. 1 thing they have to deal with. I just want kids who are focused and hungry. I want to make a difference in their lives.”

Austion has fond memories of Steward, the ultimate role model. He remembers seeing the grand man at the gym almost every day, imparting his wisdom on fighters young and old. Those years, he said in so many words, are precious.

Now that Steward is gone, he said, it makes sense that someone like Gates step in.

“Antonio and I are pretty much from the same block,” Austion said. “And his family is in boxing; the whole family was brought up in boxing. I don’t think it was hard for him to get into it. And it is helping me.