Magdaleno and Valdez return to action on Saturday 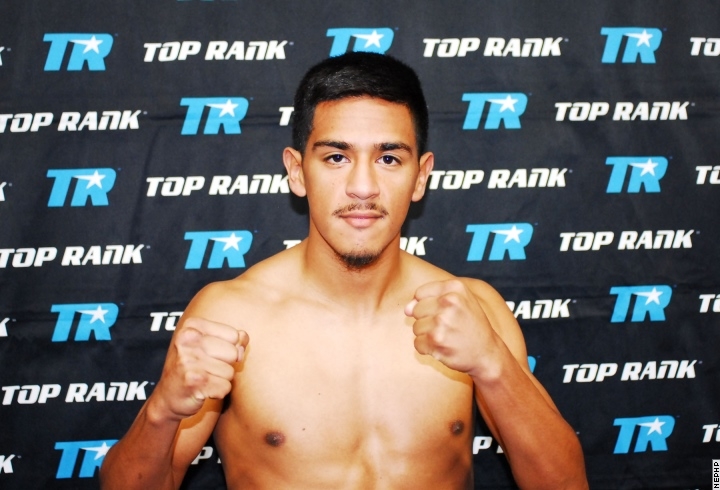 Two of Top Rank’s best unbeaten prospects, Jessie Magdaleno and Oscar Valdez, will be showcased in separate eight-round bouts against modest competition on Saturday at the Energy Arena in Laredo, Texas.

UniMas will televise both fights on the “Solo Boxeo Tecate” broadcast, beginning at 11 p.m. ET/ PT.

Magdaleno (20-0, 15 knockouts) is already ranked among the top five junior featherweights in three of the major sanctioning bodies. The 23-year-old Las Vegas resident is trained by Joel Diaz in Indio, Calif.

In his last bout on Jan. 10, Magdaleno won an eight-round unanimous decision over Erik Ruiz in Las Vegas.
The Philippines-born Apolinario (18-5-3, 5 KOs) is a former title challenger who will be fighting for the first time in the United States.
Apolinario is coming off a first round knockout win over Joel Escol on Jan. 11. The win snapped a three-bout losing streak at the hands of Koki Kameda, Hernan Marquez and Drian Francisco. Apolonario also fought to consecutive draws against Roberto Vasquez.
Valdez (14-0, 13 KOs) has begun to turn heads early on in his career. The featherweight has shown tremendous poise and patience in the ring, including devastating punching power.
In his last fight on Dec. 20, Valdez stopped Jean Javier Sotelo in the fifth round. A month before the Soltero fight, Valdez scored an impressive seventh round technical knockout over former world title challenger Alberto Garza.
Ramirez (25-5, 15 KOs) was stopped in the fifth round of his last fight on Dec. 13 at the hands of Abner Mares. It was his first fight in a year, since he was knocked out by Vasyl Lomachenko, who was making his pro debut.
Also appearing on the Top Rank card will be Esquiva Falcao versus Omar Rojas, Egidijus Kavaliauskas against Arman Ovsepyan and Oleksandr Gvozdyk facing Rowland Bryant.
Francisco A. Salazar has written for RingTV since October of 2013 and has covered boxing in Southern California and abroad since 2000. Salazar also covers boxing for the Ventura County (CA) Star newspaper, Boxingscene.com, and Knockout Nation. He can be reached by email at [email protected] or on Twitter at FSalazarBoxing.