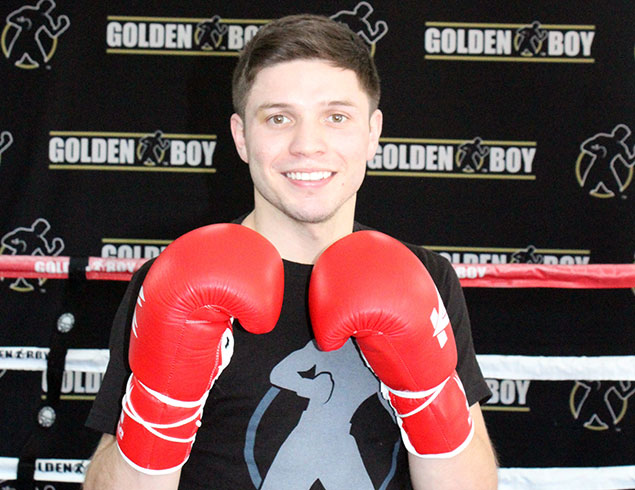 Julian Ramirez will headline his first show in his first scheduled 10-round bout on Thursday when he takes on Raul Hidalgo in the main event of “LA Fight Club” at The Belasco Theater in Los Angeles.

Ask those who have watched the undefeated featherweight prospect grow up in Southern California boxing gyms, such as his uncle and noted trainer Rudy Hernandez, and they’ll tell you the 22-year-old southpaw was ready for the 10-round distance two years ago.

Ramirez won’t disagree with that opinion but he’s content with the way he’s been moved by manager Joel De La Hoya and Golden Boy Promotions, and he’s thrilled that his first bout of 2015 will be in front of hometown fans. 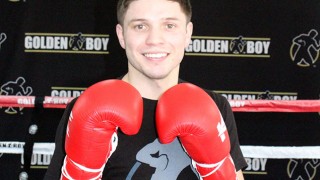 “Rudy has seen me do eight and 10 rounds in the gym,” Ramirez told RingTV.com during a media workout at Westside Boxing Club last week. “He remembers me working with (former WBO flyweight titleholder Isidro) ‘Chino’ Garcia and Jorge Arce’s brother (Francisco) when I was 14 years old. By the time I was 16, I was too big to spar with those guys and I was doing 10 rounds easy.

“Maybe I could have fought in a 10 rounder last year or earlier but to be honest, I’m just happy to be fighting. I like to fight often and I was hoping to fight in February, but I can’t complain about this – fighting in the main event of an LA Fight Club show. It’s cool that it’s on TV, but I’m more excited about it being in Los Angeles, where my family, friends and soccer club teammates can see me live.”

Ramirez’s family and friends know what to expect from him on Thursday night – an aggressive boxer-puncher style and smart pressure that gradually breaks down his opponent. His soccer buddies will probably notice his often overlooked athleticism (Ramirez’s nickname is “El Camaron” – Spanish for shrimp – due to his somewhat scrawny appearance, but he’s got good footwork and coordination).

Joel De La Hoya will be analyzing how Ramirez handles Hidalgo in comparison to how other up-and-comers fared against the well-traveled young journeyman. De La Hoya doesn’t disagree that Ramirez (13-0, 8 knockouts) could have been moved a little faster, but given his fighter’s age he didn’t feel the need to rush development.

One of the standouts in De La Hoya’s managerial stable, unbeaten junior lightweight contender Francisco Vargas, was moved aggressively – fighting often against quality opposition – over the past two-and-half years. However, Vargas was a 2008 Olympian and already in his late 20s when De La Hoya started managing him.

Ramirez, who just turned 22 on March 23, had a solid but not extensive amateur career (a little over 70 bouts) that mostly took place in California. So far, the only recognizable name on his record is spoiler Derrick Wilson, who he outpointed over eight rounds last January.

“I do better against a quality opponent,” said Ramirez. “I think the Wilson fight is my best fight so far. It was a satisfying win because I know there were people in the gyms who thought he would beat me. So I enjoyed making the rounds on Monday and rubbing my win in their faces.”

Ramirez is a polite and affable young man outside of the ring but he’s got a bit of a chip on his shoulder, which De La Hoya likes.

“I see Julian flourishing as a Los Angeles-area attraction,” De La Hoya said. “If (Orlando) Salido beats Rocky Martinez for the WBO junior lightweight title on April 11, the plan would be to have Vargas challenge Salido at StubHub Center (in Carson, California) in June or July. We would put Julian on the Salido-Vargas undercard and other major shows in Southern California.”

The quality of Ramirez’s opposition going forward depends on how well he performs against Hidalgo (23-12, 17 KOs). The 26-year-old native of Chihuahua, Mexico took a then-undefeated (15-0) Alberto Guevara the eight-round distance in 2012 before the bantamweight challenged for world titles. Hidalgo also took Ivan Morales (younger brother of Erik Morales, 20-0 at the time) and Puerto Rican standout Jose Lopez (13-0 at the time) the eight-round distance in 2013 and 2014.

“I know Hidalgo’s trainer. He always has his fighters in shape and throwing a lot of punches, so I’m expecting an aggressive fight against a guy with way more experience,” Ramirez said. “I’m not one to spar a lot but I put the work in for this fight. I sparred with (Boxcino tournament winner) Petr Petrov, Alejandro Luna, Ronny Rios and some guys who had like 300 amateur fights.”

Petrov, who tops an ESPN2-televised card against Gamaliel Diaz on Friday, and Luna, an undefeated (17-0) Southern Californian, are lightweights. Rios was world rated at junior lightweight.

“Quality sparring gets me ready for anything,” Ramirez said. 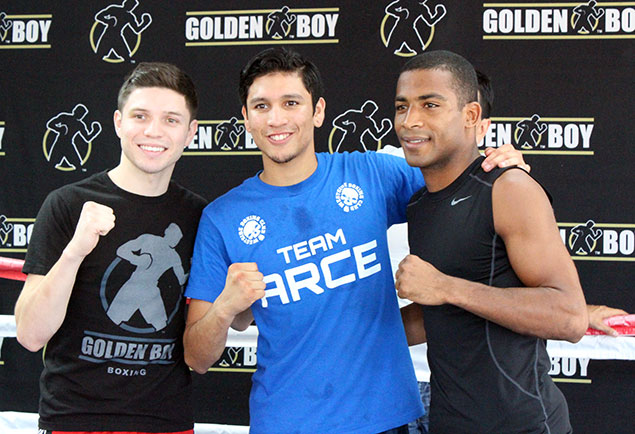 Doors to The Belasco Theater open at 5:00 p.m. on Thursday. The first fight of the card (the four-round pro debut of junior middleweight Melsik Baghdasaryan, of Glendale, California, against 2-4-1 Vicente Guzman of Upland, California) begins at 5:30 p.m.

The televised portion of the card begins at 7:00 p.m. PT with a scheduled six-round lightweight bout between Brazilian amateur star Everton Lopes (1-0, or 4-1, 2 KOs, if you count his World Series of Boxing record) vs. Kansas journeyman Robert Seyam (2-2, 2 KOs).

The biggest attraction on the card, Nick Arce, may or may not be seen on the Fox Sports 1 broadcast. Arce (2-0, 2 KOs) will face an opponent to be determined in a four-round featherweight swing bout. The 18-year-old L.A. native (who is not related to popular former champ Jorge Arce) is expected to sell more than 300 tickets to his well-organized (though the social media of his home gym, the Westside Boxing Club) fan group.

Featherweight prospect Joet Gonzalez (8-0, 3 KOs), of Glendora, California, is also on the card in a scheduled six-rounder against Tijuana journeyman Ali Gonzalez (6-5-1, 1 KO).