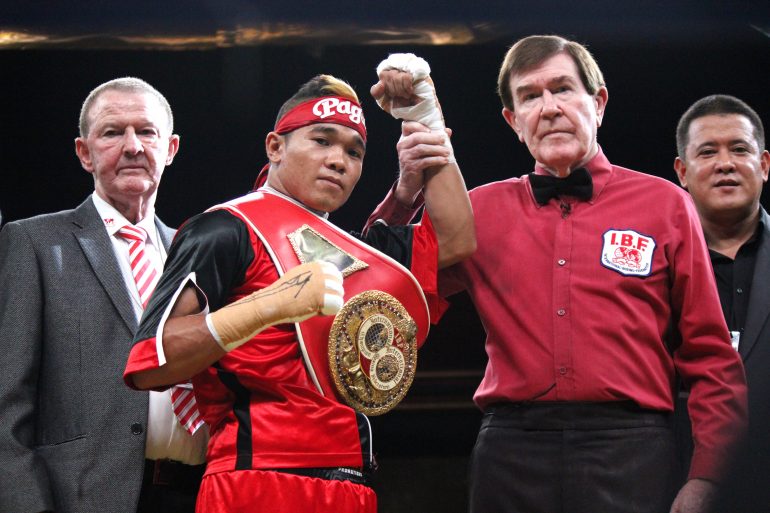 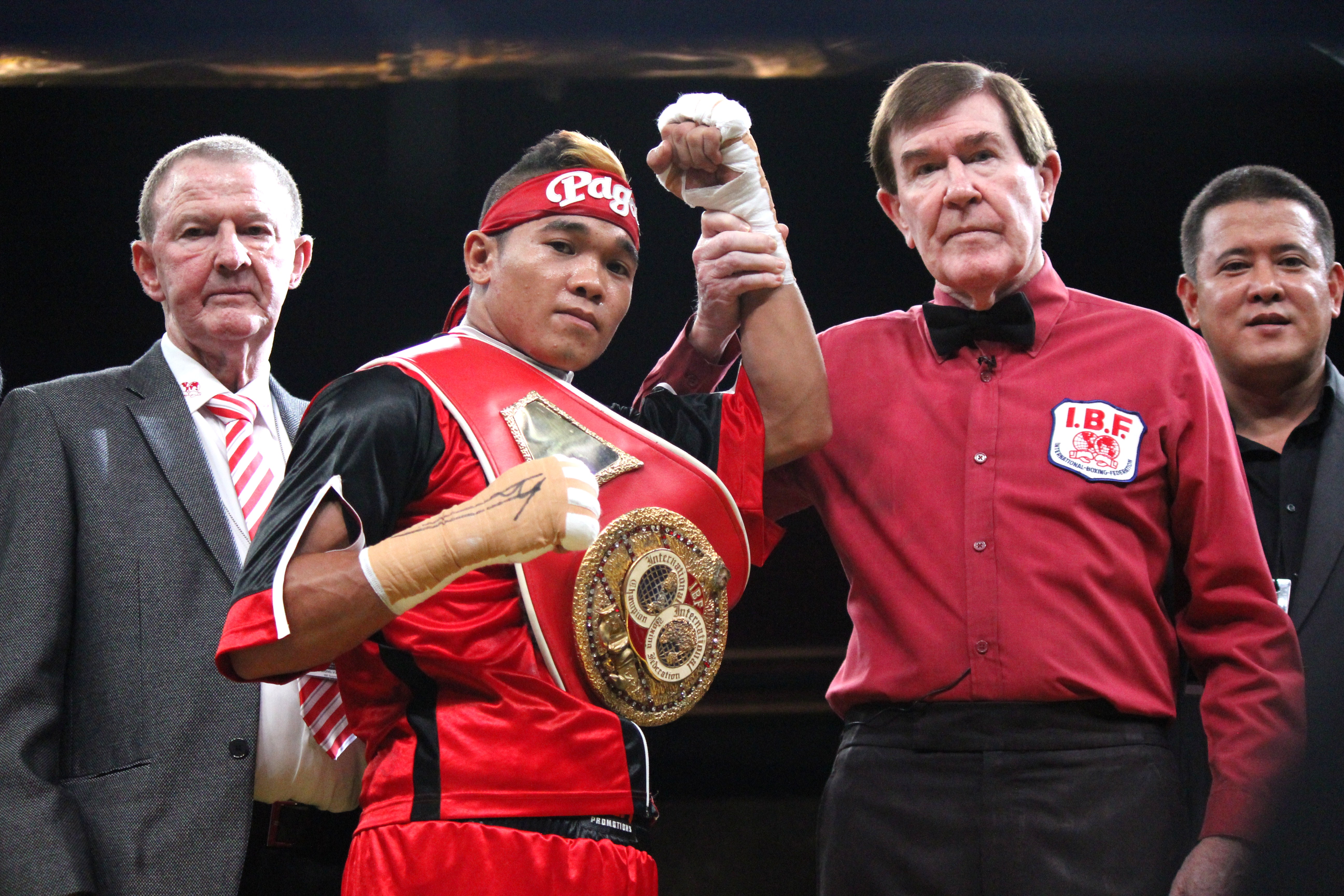 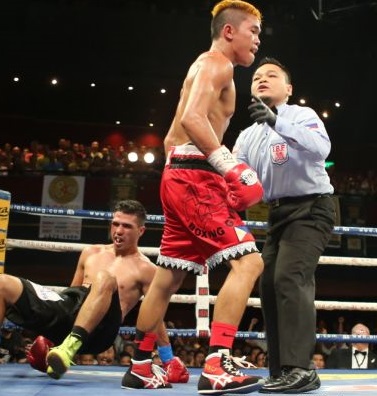 Best night of pro career: Pagara feels most proud of his win over Raul Hirales. The Filipino dropped the experienced Mexican in the third round and won a near shut-out decision on the “Pinoy Power 28 “card headlined by Donnie Nietes vs. Carlos Velarde last November.

“[The] last fight, I fought Hirales,” Pagara told RingTV.com through ALA Boxing Vice President Dennis Canete. “I liked that fight because my timing was perfect in that fight and the style of my opponent was perfect also.”
Worst night of pro career: Pagara has yet to have an off night but interestingly feels let down by a 78-second demolition of Hugo Partida last June.
“I was disappointed with that fight,” he said. “It wasn’t a challenge; Partida got knocked out in the first round. I expected more [from my opponent]. I was ready to show my skills.”
Next fight: On Saturday, Pagara puts his unbeaten record on the line against heavy-handed Mexican Rodolfo Hernandez (26-5-1, 24 knockouts) at Manila’s historic Araneta Coliseum (which hosted the “Thrilla in Manila” took place) as part of “Pinoy Power 30.”
Hernandez, 28, is a veteran of over nine years who fights for the first time outside his homeland. Previously, Hernandez held the Mexican bantamweight title, scoring his best win as a pro against then once-beaten Jesus Ruiz, stopping his countryman in the eighth round, not unlike current WBC featherweight titlist Leo Santa Cruz did earlier this year.
“We came up with a game plan. I know he has a straight hook that is dangerous; we studied that. “Fofo” is quite exciting; he’s a puncher.”
The bout takes place on the biggest card of the youngster’s career to date.
“I’m excited with Nonito [Donaire vs. William Prado] and Donnie [Nietes vs. Gilberto Parra] fighting on the card.” he said.
Why he’s a prospect: Pagara’s amateur record is quite eye-catching at 400-0. He won 65 tournaments in his homeland, also fighting internationally in Qatar.

Pagara has holds wins over Mark Anthony Barriga, who represented the Philippines at the 2012 Olympics (but losing at the quarterfinal stage), and promising amateur Rey Saludar.

Pagara elected to turn professional despite being courted by the National team to fight for them, which would have given him the platform to fight at the Olympics and World Championships. He wanted to follow in his older brother Jason’s footsteps and turn pro.

Recently, he sparred four rounds with Nonito Donaire; he has also worked out with stablemate, RING and WBO junior flyweight champion Donnie Nietes.

“The Prince” is already world ranked by the IBF No. 7 and by THE RING magazine at No. 9.

Canete met Pagara because of his brother and saw him train at the ALA Gym and recognized his talent.

“Aside from his skills, from a promoter’s point of view, he has charisma,” commented Canete. “The first time he fought even though he wasn’t that well known a lot of media picked up on him even though it was a small fight he made it to the main page of the newspaper. Hopefully as he advances he will gain more confidence and talent and have his own style.”

ALA Promotions President/CEO Michael Aldeguer also has high hopes for his fighter.

“I think he was one of the most bemedaled amateurs we’ve ever had in the Philippines,” said Aldeguer. “He was recruited from the Filipino team and since we saw his potential, he has racked up good wins the last 20 fights. This is his biggest fight come Saturday. We’re thinking of bringing him to the States and hopefully he can become a future star from the Philippines.”

Pagara is a well-rounded fighter and feels he has several strengths: “My favorite punch is the straight hook. I know how to box and also punch. I am developing a style people will appreciate.”

Why he’s a suspect: Pagara only turned 21 last month; despite his vast amateur background, he doesn’t have much international experience. However, he has adapted to the pros impressively so far.

He’s getting good exposure fighting on the Pinoy Power cards, where he faces his third consecutive Mexican opponent.

Pagara feels there are two areas he needs to improve as he continues his progression: “I am improving my stamina and strength.”

Story lines: Pagara comes from a humble beginning. The middle boy of three, both his brothers box, Jason, a junior welterweight (35-2) and his younger brother, Gerard is on the National amateur team. He also has three sisters.

“My father didn’t have a regular job; my mom was a housewife,” Pagara said. “I sold some bread when I was young to make money for the family.”

He became interested in boxing at eight years old: “I started boxing and then stopped for a while but when I saw Jason won a belt, I wanted one.”

His hero is surprisingly not Manny Pacquiao. Instead Pagara liked Naseem Hamed, hence the “Prince” moniker.

Away from boxing, he enjoys billiards and singing. He has his own house in Cebu but stays at the ALA Gym for two weeks prior to a fight to prepare.

His hopes are simple but lofty: “I want to reach the level of Manny Pacquiao.”

ÒÇÇ
Questions and/or comments can be sent to Anson at [email protected] and you can follow him at www.twitter.com/AnsonWainwright.