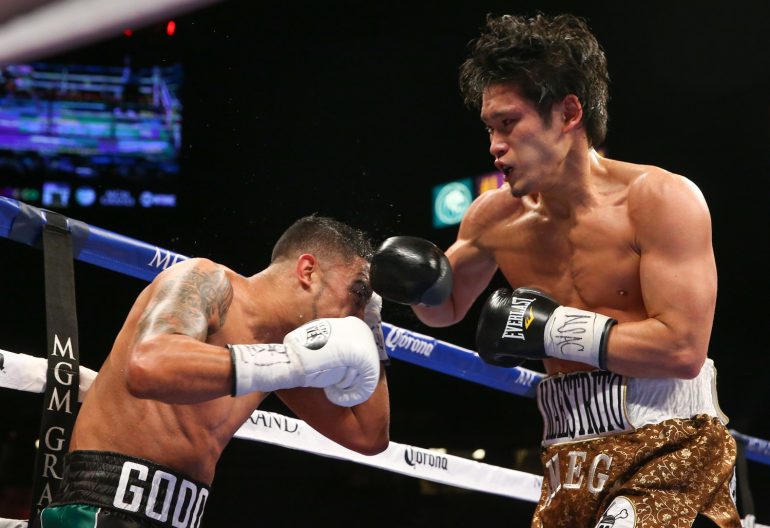 Fans who are familiar with Yoshihiro Kamegai love the way the welterweight fringe contender fights. The 32-year old Tokyo resident brings the ruckus to the ring and usually makes for entertaining fights as his U.S.-televised slugfests with Jorge Silva and Robert Guerrero attest to.

Most hardcore heads wouldn’t want the Japanese slugger to change a thing about his all-action style but Kamegai, who faces veteran Alfonzo Gomez on Friday in the main event of a Fox Sports 1-televised “Golden Boy Live!” show from Indio, California, is always trying to improve some facet of his game, be it technique, power, body punching or defense.

“All of my fights, especially my first loss (a decision against Johan Perez in June 2013), encouraged me to take a step back and look at what I could have done better,” Kamegai (25-2-1, 22 knockouts) told RingTV.com through Nobu Ikushima of Teiken Promotions, which co-promotes the fighter with Golden Boy Promotions.

“My two losses made me train differently in order to improve.”

Kamegai’s last setback was against Guerrero in a Showtime-televised donnybrook last June that some regarded as a fight of the year candidate. Many fans who missed his fights with Silva and Perez caught his bold stand against the top-10 contender, which headlined a show at StubHub Center in Carson, California, and were suitably impressed.

“I felt I gained a ton of experience in the Guerrero fight,” Kamegai said. “I also gained a lot of recognition from American fans, and fans everywhere, actually, but that fight also let me know that I need to improve my power.”

Kamegai, a natural welterweight, believes he should’ve been able to stop Guerrero, who began his career at featherweight (never mind the fact that The Ghost’s beard has stood up to the best bombs of both Andre Berto and Keith Thurman).

“I did damage to Guerrero’s eye and I think I hurt him to the body a few times, but I needed more combinations with power. I think I could have done more.”

Kamegai probably always feels he could have done more in his fights. Against Gomez (24-6-2, 12 KOs), a 34-year-old boxer-slugger who has faced several former titleholders during his 14-year career, the Japanese standout knows he’ll have to put forth his most complete fight to date.

Gomez, a Los Angeles-based Guadalajara native, has fought Arturo Gatti, Miguel Cotto, Canelo Alvarez, Jose Luis Castillo and Ishe Smith. Only Cotto and Alvarez had the power to stop Gomez, who was too much for faded versions of Gatti and Castillo.

“Gomez has good technique and very good footwork,” Kamegai said. “He can be an awkward fighter as well. Sometimes he fights with his heart, as he did against Canelo and Cotto. So I’ve prepared for both versions of Gomez, the tough and the tactical.”

When asked how important it was to win his first U.S.-televised fight (the Silva bout ended in a draw), Kamegai said he hadn’t realized that American fans have yet to see his hand raised in victory. Maybe it doesn’t matter.

“I want to win impressively and increase my exposure, but my focus is on Gomez and putting on a fan-friendly fight,” he said.