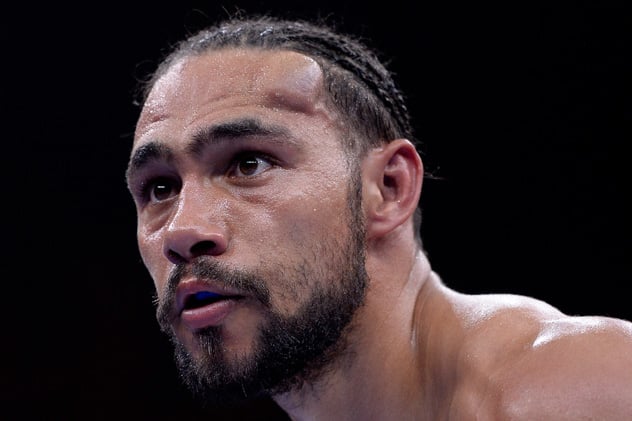 Keith Thurman: Thurman’s dominance over Robert Guerrero on the first Premier Boxing Champions card on NBC Saturday in Las Vegas looked was reminiscent of his other impressive performances. One thing that was different: Guerrero. That’s the main reason his one-sided victory was particularly impressive. He didn’t beat a marginal opponent; he beat a former two-division titleholder known for solid all-around skills and an enormous heart. And he had little trouble doing it even though he fought most of the fight with a grotesque knot on his head. Thurman (25-0, 21 knockouts) gave a clinic on how to be an effective boxer-puncher, moving in, inflicting damage with hard, accurate shots and getting out before his opponent could respond with any consistency. That was the fight in a nutshell. He put Guerrero down with an uppercut in the ninth round but was unable to stop him. Don’t hold that against him. It was a flaw in Thurman’s performance but it had as much to do with Guerrero’s profound durability as any deficiency on the part of the winner. Few others would’ve survived the onslaught. Overall, it was an excellent performance that enhanced Thurman’s reputation as one of the sports next great stars.

Adrien Broner: Let’s get something out of the way first. Broner seemed say after his victory over John Molina on the NBC card that he lost to Marcos Maidana because he chose unwisely to engage him in a toe-to-toe battle. Uh, no. Maidana forced Broner to engage him by applying almost nonstop pressure. Broner really had no say in the matter, from my perspective. That said, he clearly fought Molina on his own terms. He easily outboxed a far inferior fighter to win a lopsided decision but the boos he heard afterward were significant: Broner failed to entertain, which is a no-no for anyone who likens himself a star. To be fair, A good portion of the problem can be attributed to Molina, who simply refused to throw punches. He averaged only 21 punches a round, landing an average of only five. Make no mistake, though: Broner fought cautiously. He could’ve done a lot more damage without getting reckless but obviously wasn’t concerned about what the fans wanted. He said as much afterward. I think Broner (30-1, 22 KOs) is a very good fighter, one who probably will win a few more major titles before he’s finished. But he won’t become the star he thinks he is with performances like that.

Zolani Tete: If you didn’t see the IBF junior bantamweight’s titleholder’s defense against previously unbeaten Paul Butler on Friday, watch it on YouTube. Tete is special. The southpaw from South Africa has ridiculous height for a 115-pounder – 5 feet, 9 inches (175cm) – and he knows how to use it. Butler, a very good boxer, had no idea how to cope with Tete’s remarkable long jab and stinging power punches. Tete won every round on the cards of some observers – including mine – and then ended the fight with one spectacular punch, a perfect left uppercut that rendered Butler unable to continue. And that’s not all: Tete has ascended to the top of his division fighting primarily in hostile territory. His greatest disappointment was a knockout loss to countryman Moruti Mthalane in 2010 in South Africa. Other than that, his most important fights have taken place on foreign soil – Mexico, Argentina and the U.K. He lost a majority decision to Juan Alberto Rosas (Mexico) in 2011 and a split decision to Roberto Domingo Sosa (Argentina) the following year, results that raise at least some doubt because of the home-country advantage. And Tete (20-3, 17 KOs) beat Butler (17-1, 8 KOs) in Liverpool. The bottom line is this: It doesn’t matter where you meet Tete; he’s going to give you hell.

The NBC card: I more or less liked the TV matchups going in so I can’t be overly critical after the fact. I figured Thurman and Broner would win but I thought Guerrero and Molina, two spirited warriors, would push them. In the end, they really didn’t. Guerrero fought with great heart – no surprise there – but he was nearly shutout on the cards. Molina was much worse, failing to throw enough punches even to give himself a chance to win. The result was two mismatches, which is the last thing Al Haymon and others associated with the new series wanted. There was good news too. The presentation was slick; it had a cutting-edge feel. The broadcast team was star-studded and did a good job, although Marv Albert overstated Guerrero’s effectiveness against Thurman. And the fans were treated to two good performances even if the fights weren’t competitive. Thurman underscored his reputation as a fast-rising star and Broner, while hardly dazzling, looked sharp in his one-sided victory. I would give the first NBC card a C+, only slightly better than average because of minimal drama. Again, though, we shouldn’t be too critical: The co-features looked pretty good on paper. One never knows how things will turn out. Next up on NBC: Danny Garcia vs. Lamont Peterson and Andy Lee vs. Peter Quillin on April 11. I expect that one to be more fun.

Joseph Diaz Jr.: Diaz was the star of the show Friday in the first card of the new L.A. Fight Club series at the old Belasco Theater in Los Angeles. And he fought like it. The junior featherweight contender, fighting in front of his hometown fans, calmly but very aggressively battered Juan Luis Hernandez (17-5-1, 9 KOs) into submission in a short but brutal fight. Diaz’s vicious body shots forced Hernandez to take a knee three times and then he ended the fight with one more blow to the body a split second after the bell to end Round 3, which left Hernandez writhing on the canvas and ultimately unable to continue. Referee Jack Reiss determined that the late punch was an accidental foul. Hernandez’s refusal to continue fighting resulted in a TKO for Diaz (15-0, 10 KOs), much to the pleasure of the estimated 1,000 crammed into the refurbished theater. Diaz appears to be the real deal. He’s only 22 but fights with poise. And his punches are explosive and accurate. Paulie Malignaggi, who called the fight for Fox Sports 1, told me afterward: “I really didn’t see any flaws.” Diaz is definitely one to watch.

I’ll always admire Guerrero (32-3-1, 18 KOs). He has had to overcome a number of obstacles – most notably his wife’s life-threatening illness – yet is a three-time champion in two weight divisions. His peak performance probably was his convincing victory over Andre Berto in 2012 but there have been many more strong outings. He wasn’t born with great speed, athleticism or punching power. That’s one reason he has fallen short against his best opponents, Floyd Mayweather Jr. and Thurman. He obviously has limitations. That said, he’s is a very good boxer with one of the biggest hearts in the sport, which he demonstrated once again on Saturday. And he’s only 31, meaning he is far from finished. That’s good news for boxing fans. ÔÇª Molina (27-6, 22 KOs) said after his fight that Broner’s unwillingness to engage him was the reason he threw relatively few punches. That might’ve played a role but it wasn’t the problem. Joe Goossen, his trainer, told him repeatedly in the corner that he needed to get busy. His job was to let his hands go. And he just didn’t do it. In his defense, Molina has relatively little experience. Hopefully he learned that you have to throw punches to win fights. ÔÇª No one should be surprised that IBF flyweight titleholder Amnat Ruenroeng (15-0, 5 KOs) outointed Zou Shiming (6-1, 1 KO) to retain his title Saturday in Macau. Shiming, a two-time Olympic champ from China, has been developing as a pro but isn’t as far along as his Thai opponent. Another learning experience.