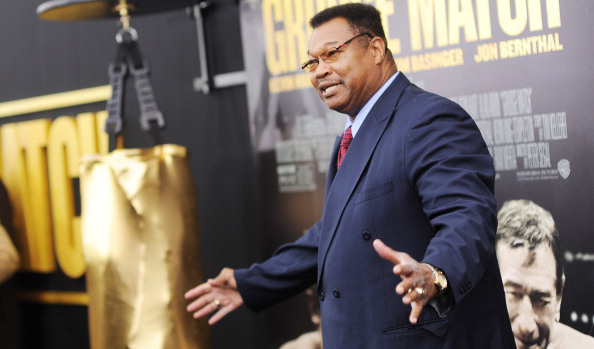 They used to run boxing on network TV, back in the day.

Did you know that? You might not if you are, like, 35 years or younger. For realÔÇªthe last time championship boxing ran on prime time on NBC, as it will tomorrow, was 1985. Larry Holmes, possessor of a majestic jab, had to work harder than many thought necessary against challenger Carl “The Truth” Williams, a New Yorker who stepped up, above and beyond his typical station in the ring that evening near Las Vegas.

I reached out to “The Easton Assassin,” who reigned over the heavyweight scene after Muhammad Ali’s sun faded and before the Mike Tyson shooting star exploded into a magnificent ball of fury. The Pennsylvania resident, a successful businessman with immense real estate holdings, told me he will tune in to watch the fights on NBC tomorrow (Saturday) night and, like all (OK, no doubt, most of us. Some people hope the endeavor flops miserably because, well, people are competitive) of us, he hopes the move to prime time succeeds.

“I fought Carl ‘The Truth’ Williams and I remember it was a hard fight,” the 65-year-old told me about the evening in which his IBF title was up for grabs. “And I remember it because it was the first time I ended up with a black eye.”

Holmes, indeed sporting a puffed golf ball of a left eye, post-fight, was 35, Williams 25. Sad to say, The Truth expired early, in April 2013, from esophageal cancer.

So, this night’s tussle was the was the first time anyone took Holmes 15 – yes, they used to go 15 rounds in championship fights, my young friends! – and the fight featured no knockdowns. Holmes kept on a marching toward that magic 49th win in a row, to match Rocky Marciano’s mark, and this was his 48th. In Reno, Nev., Holmes was in against a 16-0 guy who often out-jabbed the jabber, a Florida-born, Queens guy who’d started boxing only five years prior, and made fools out of oddsmakers calling him a 6 1/2-to-1 ‘dog.

Kevin Rooney, who worked with Tyson, was cornering The Truth, in a promotion put together by Murad Muhammad. NBC would have boxing on the air for two hours this Monday night, beginning at 9 ET. The Holmes bout was scheduled for around 10 o’clock to kick off. Watch the tape and note the thorough manner in which the feature bout is set up, with ample interview time for the combatants.

On fight night, Ferdie Pacheco did color next to Marv Albert, while tomorrow, Sugar Ray Leonard will provide analysis and insights alongside – you guessed it – Albert. We saw commercials from Stroh’s (huh?) and the act played out in Reno at the Lawlor Events Center. Marvis Frazier also tangled with James “Quick” Tillis, who called himself “The Fighting Cowboy” at this juncture.

Holmes, active as a pro from 1973-2002, will check out this “Back to the Future” effort, put together by Al Haymon as part of his “Premier Boxing Champions” series, which he has placed on NBC, buying time on their venerable stage. That, of course, flips the script in that typically we see the broadcast entities pay for and often compete for content. Haymon is pulling a switcheroo, betting his way will rebuild the sport as a mainstream entertainment option. And how will he profit and presumably reward investors who have ponied up maybe hundreds of millions of seed money? That remains to be seen. Holmes is keen to see how this plays out and is wondering if this Haymon model isn’t going to be as hurtful as it is helpful. “I’m glad to see it coming back on NBC,” he told me. “I do hope other networks follow that. It’s a good sport; it’s made me what I am today. But it has to be competitive fights. Back in the day, people got to know you when you fought on the network, so they wanted to watch you. I got a letter the other day from a guy who said he grew to know me watching me on ABC with Howard Cosell. And he said he misses that. That’ll be good for boxing.”

And it’ll be good for boxing if the fights and especially the topper, the Robert Guerrero-Keith Thurman welterweight tangle, are ebb-and-flow specials.

The NBC people reached out to him about Holmes-Truth footage, Holmes told me. It spurred some recall. “A lot of people thought it was a downside for me. They didn’t realize I was fighting a guy that could fight. He paralyzed me, studied everything I did.” Not to mention he had a four or five-inch reach advantage on the jab-master HolmesÔÇª

I wondered, did Holmes see the writing on the wall, which portended a “nichification” of the Sweet Science soon after that Williams square-off? Boxing’s best fare started to get shifted behind payrolls on premium cable and pay-per-view. “You had Tyson and he did real good but he also hurt the sport. He had that reputation and what he did to [Desiree Washington] and he went to jail. Fighters got a bad rep and everyone got greedy. Did I know it was going to happen? Sort of, I thought so but we were were all kind of confused.”

Holmes can foresee the sport enjoying an upswing and hopes that some A grade heavyweights strut their stuff to the masses. “Heavyweights are key because who knows how long [Floyd] Mayweather [Jr.] will last?” he offered. “A lot of people watch him; a lot don’t like him. His nickname “Money,” showing how much he has, he thinks he’s God’s gift. The Haymon guy, will it be good for boxing, buying others out? I don’t think that’s good; that will hurt boxing.”

Holmes said, back in the day, you had solid competition with a fighter being able to entice Bob Arum to do a deal if Don King didn’t want to play ball. Of course, Arum is still around and Oscar De La Hoya is not going anywhere, etc, so I’m not assuming any inevitable, across-the-board reset of the scene. As I said to Holmes, if the fighters are getting paid well and the fans get competitive fights and are not having to pay out of pocket as much, that goes a long way in declaring this Haymon play a success.

One element which can add or subtract from the overall grade of the push back to prime time is the judging. Unfathomable cards, ones which leave bewildered and disgusted watchers thinking or crying fix, pop up way too often. Drama was in the air in 1985 when Holmes and Williams waited for the final tally; Paul Gibbs and Al Rothenberg saw the bout 146-139 while Jerry Roth had it 143-142 and we heard…”and still” as Holmes had his hand raised. Some boos rained down but Dick Enberg said he thought Holmes’ heart showed and he pulled it off down the stretch. In his next bout, Michael Spinks scored a mega-upset and Holmes fell a win short of “The Rock.” In Reno, Williams thought he won and many watchers agreed, so we can only hope there will be no water cooler talk of the need for new spectacles for the arbiters. Because oftentimes, despite a desire to change the game, the same old bedeviling elements and bugaboos pop up.