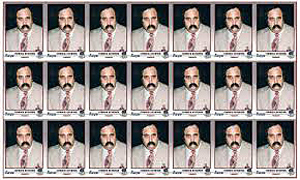 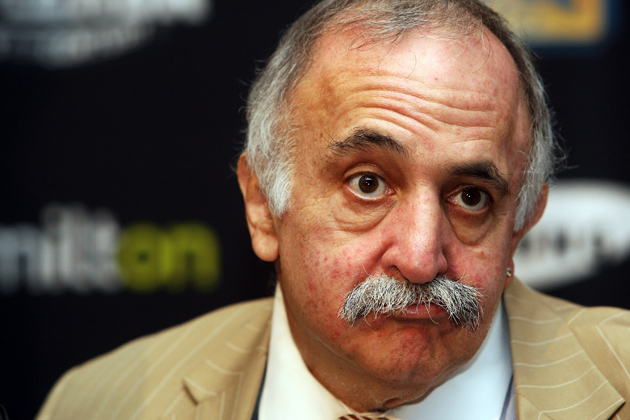 The memorial service, the tone of it, the sum of the parts, the recollections, the depth of feeling evinced by people present, and especially those that strode to the mic at the Edison Ballroom in Manhattan on Tuesday night, reminded me yet again why I chose this sport, this subject matter, to make a living on.

Boxing attracts a special brand of people to it, and much more so than conventional wisdom has it, in a good way.

One of those persons was Cedric Kushner, one of our certified characters who we have lost of late. The South African-born, New York-based promoter died on Jan. 29, after a long slide due to health issues which forced him to the ropes, and kept him thereÔÇª but he finally succumbed to the ten count, with 66 years of living packed in.

I have never and suspect will never again hear so many hooker stories so fondly and with good humor shared with those left behind at any sort of service, and can also state that it is unlikely that I will again see and hear a rabbi offer heartfelt and poignant phrases to help Cedric’s family and friends and supporters comprehend proper context to the life of the man who touched them. Yes, hooker stories and rabbinical wisdom, friendsÔÇªthis is why I chose boxing, and boxing chose me.

Promoter Lou DiBella, who called Kushner “The Walrus,” as many others did (affectionately mind you), for his portly physique (the big man once weighed close to 400 pounds) and trademark mustache, presided over the event.

Ced saw someone he knew out on Ocean Ave. A lady, too much makeup, a hole maybe in her stockings.

“Mary Anne!” Ced screamed out the window of the limo. “Mary Anne! How is your mother?”

“She’s better, thanks for asking, Cedric!” replied his acquaintance/lady of the evening.

That was Cedric. He had appetites, some which could be looked at askance by the squares. But boxing people know that doesn’t define you, that what does is how you treat the regular Joes. Cedric treated them well, we heard.

“Cedric, he’d get a salad,” DiBella told us, “and then put on two pounds of blue cheese. “That was our friend.”

Kathy Duva, the New Jersey-based promoter who learned the trade under her late husband Dan Duva, a mega-player in the 1990s, told me before the event kicked off that she was wearing that mink coat this night for a reason.

Dan looked out for Ced, showed him the ropes and the Duvas were friendly with him. They’d hit his NYC apartment and his Hamptons pad, and one time, Kathy showed up at the apartment wearing a mink. The doorman assumed that she was a paid pro, there to see Ced, and requested she wait downstairs.

“I was a young mom, with two kids. That made me happy!” she told me.

“Ced was a bit of a scoundrel. But he was our scoundrel,” DiBella told us.

Bittersweet was the tone, as we heard that Ced was planning his comeback – hey, this is boxing, those on the mat, those decades past their prime as pugilists are ALWAYS plotting their comeback – and the very morning he died, was planning a new heavyweight tournament. He’d found a money man in HoustonÔÇª”I’m going to have one more night!” he’d told DiBella recently, at another memorial for another good one lost too soon.

The room loved the warmth and wisdom of Rabbi Ar Fridkis, who told us that, “I sound like Lou when I’m not in front of you.” We immediately perked up, and found ourselves respecting more, identifying more, with this leader there to help us process the permanent loss of what was a permanent fixture on our shared scene.

The rabbi told us that he loved the humility in the Ced story, how he came from South Africa to the U.S. and cleaned pools, and worked a Ferris Wheel.”And then to lose it and still have the dignity to be surrounded by your friends,” he said, appreciating how life can indeed act like that Ferris Wheel, going up, down, and coming back to the place we started.

DiBella told us that Ced had no small success as a ticket broker aka scalper, and made some dough re-selling tix to the 1972 Munich Olympics. Then, he wanted to get into rock concert promotion. With chutzpah, and by virtue of a charming and charismatic persona, he did so. He borrowed $8,200 to promote a Steppenwolf show, lost that and maybe moreÔÇªbut kept grinding. He’d phone home, his brother Alvin told us, and report that he was promoting stellar acts, like Fleetwood Mac, and Bob Seger. His pop didn’t really get it, but he did understand his son’s air of pride as he told of his successes. For a kid who was something of a neighborhood terror, who dropped out of school at grade eight, who had dyslexia, etc., he was proud of his upward movement.

Kushner left the concerts biz and hit the fight game not long after being entranced by the pomp and the attendance at the Muhammad Ali-Leon Spinks rematch, Sept. 15, 1978. His ability to BS with Barnumesque skill came in handy; brother Alvin told us how Ced would sometimes strut around in a lifeguard uni on the beachÔÇªnobody knowing that in fact, he really couldn’t swim all that well. “He was no angel,” big bro, seven years his senior, told us. Alvin also informed us that Ced didn’t have the South African accent he used in the US when he left South Africa. “I can’t say I was his friend,” Alvin admitted, noting the distance real and figurative between them. “Cedric, my brother, I loved you and I will still continue to love you,” he finished.

Nobody hit our hearts more than longtime love Jody Lister. “He always carried a picture of me in his wallet and he showed it to his hookers,” she told the crowd, which roared. He referred to the lady who started out as a secretary but became a confidante extroardinaire as ‘my number one.'”

Ced, she told us, was like DiBella, both actually probably like dogs better than humans. Ced kept and adored German Shepherds, his former secretary told us. He’d shower her with stuffed animals, and she quickly moved in with him, but intimacy, emotional intimacy, wasn’t easy for him. One night, he told her she’d have to move out. They’d gotten too serious. They both wailed together, a river of tears coming from Ced’s now unclogged ducts. “‘I’m having trouble staying focused on my work,'” Kushner told Jody. “And that’s what mattered to him, his work. We moved to being best friends forever. He was true championÔÇªwhat a heart. What a chin. He died with nothing butÔÇª with everything that matters,” Jodi said as she scanned the crowd. “This is the second time you made me cry,” she said, as she grew silent, the waves of sadness battering her soul.

Esteemed author Thomas Hauser offered another hooker tale, drawing hearty chuckles, and noted that “Uncle Ced” was never the sort of guy who’d look over your shoulder for someone better to talk to, to his immense credit.

Mike Marley, the ex journo, told us that there was the time Cedric took a crew to a house of ill repute in Laredo.

“Ever been here before, Ced?”

“Oh, no,” he said, sounding like Alfred Hitchcock always.

“Never been here before, huh Ced?”

“Those ladies must read Ring magazine,” he drily replied.

Partner and mentee Jim DiLorenzo told us that people would report to him that they got a call from Ced, but the call didn’t go well. Why, he’d ask. Because all we heard was snoring, they’d report.

Ced, a work-a-holic, would work too much, then crash. He’d fall asleep at weird times, like in between dialing a call, and the moment when the party picked up.

Allan Wartski chuckled and drew chuckles when stating that consummate character Cedric “looked at himself as a rock in a sea of instability.” In fact, his “instability,” I offer, served as a buffer to many of us who struggle with our own imperfections in a judgmental world. Ced could visit escorts but still function as a trusted compatriot to a large handful of chums. Conflicted, maybe, utterly decent and loyal as a friend, surely.

Walter Kane, a good-guy attorney, told us that Cedric’s good soul was shown when he got a $82,000 chunk from a new partner in a rock promotion, only to realize he had the moolah, but no contact info for the new partner. (I remind or inform you, this was the 1970s, this sort of thing happened then.) Ced ran ten blocks back to where he’d got the dough, and found his new partner, to make sure he didn’t come off like a grifter.

The rabbi said it best at last, after a couple hours, because too many people were too fond of Ced, and needed to share. Ced was up, and down, and life delivered a mule kick to his groin these last few years, with his fame, fortune and health suffering. But through it all, “Cedric believed in people. How incredible is that, to believe in people?”

Michael Woods is a Brooklyn-based writer who has covered boxing for two decades. The ex-ESPN The Magazine writer is currently the editor of TheSweetScience.com. You can follow Woods on Twitter @Woodsy1069