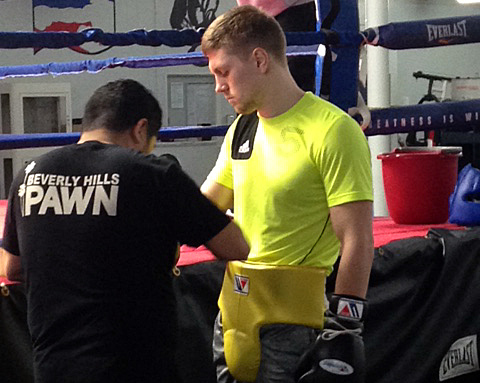 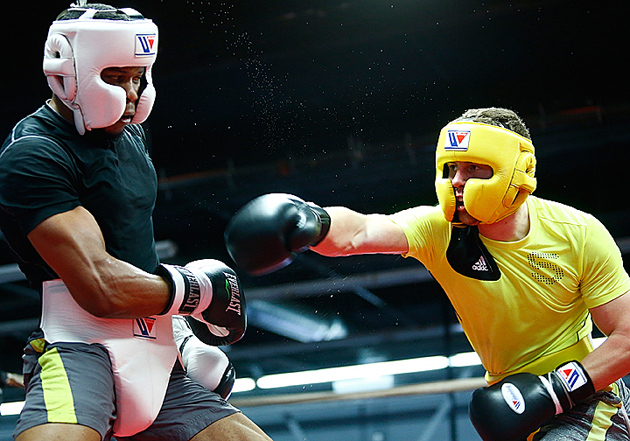 Spending time at a boxing gym is a bit like doctor appointments for me these days. I go so infrequently that I can’t remember exactly when my last visit was but I know I need to go more often because it’s good for my health.

When publicist Rachel Charles invited me to The Rock boxing gym to watch Irish middleweight prospect Jason Quigley spar a few rounds and to interview Brazilian amateur standout Everton Lopes a few weeks ago it was just what the doctor ordered.

The start of the New Year had got me down. The fight I wanted to see the most – Miguel Cotto vs. Canelo Alvarez – had fallen by the wayside and the boxing world was still in a mega-frenzy over Floyd Mayweather Jr. and Manny Pacquiao thanks to their brief face-to-face meeting at Miami Heat game. Way too many folks actually believed #TheNeverendingStory of boxing would come to a sensational end with a commercial announcement during the Super Bowl. Ugh!

But I shook all that bulls__t off the moment I stepped through the doors of The Rock, a giant facility attached to the Mission Ebenezer Family Church in Carson, California. Whenever the business and politics of boxing threatens my faith in the sport, a gym visit always lifts my spirits.

On this day, the final Friday in January, I was reminded of the two things I like best about a gym pop-in: 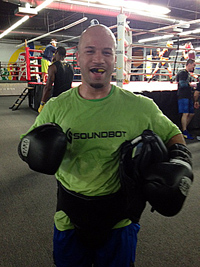 Esquivias was finishing up a sparring session with Manny Robles Jr., the son of the trainer, a former amateur standout and now an undefeated featherweight prospect. I’ve followed Esquivias career since he was an amateur. He’s had his ups – a thrilling ninth-round KO of former champ Rafael Marquez in 2013 – and he’s had his downs – decision losses to Rico Ramos, Jhonatan Romero and Ruben Tamayo (in his last bout) – but he’s always kept a positive attitude, which I admire.

Esquivias, a 31 year old from nearby Gardena, told me his “real comeback fight” will take place on a March 13 Thompson Boxing show at the DoubleTree Hotel in Ontario. I wished him well, but had to turn my attention to Quigley, a 23-year-old former amateur star from Ireland, who was about to spar for only the second time since returning to training after the holidays.

At the time I sat down to chat with Quigley the affable young man was scheduled to make his 2015 debut on the first show of the re-booted Fight Night Club series on March 6 at the Belasco Theater in downtown Los Angeles. (BoxRec.com, however, shows his next fight on March 13 on the undercard of the Francisco Vargas-Will Tomlinson main event at Freeman Coliseum in San Antonio.) 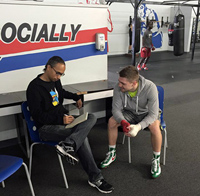 It doesn’t matter which show Quigley lands on as long as he’s showcased on TV (Fox Sports 1 if it’s March 6; HBO Latino if it’s March 13) because he’s got a lot of ability and a fan-friendly style. Quigley (3-0, 3 knockouts) just wants to stay busy this year.

“I’d like to fight every month and I think that’s the goal of my manager and Golden Boy Promotions,” he said. “That’s how it is as an amateur. You stay busy. I fought 33 fights in an 18-month period during the best part of my amateur career and I stayed sharp and on point because of that activity.

“I won 32 of those bouts, which included gold at the European championships and I took silver at the world amateur championships. It was world’s finals that broke my streak.”

Quigley would love to put that kind of streak together in the pro ranks, and if he does, he can thank quality sparring with the likes of 2012 U.S. Olympian Terrell Gausha (who was there that day, but I didn’t get a chance to talk to him) and McAllister, who Bennett introduced me to. 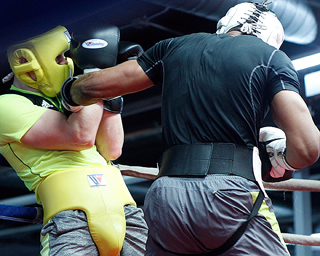 McAllister (2-0, 2 KOs), a 24-year-old Long Beach native, doesn’t have the extensive amateur background of Quigley, who had around 250 bouts (including major European and international tournaments). McAllister had around 40 amateur bouts, mostly in the local scene but he won last year’s national Golden Gloves tournament (in the 178-pound division). His athleticism and enthusiasm makes up for his lack of amateur experience, and though he called Jan. 30 a “slow day,” he gave Quigley five quality rounds of sparring.

Both young middleweights can be described as aggressive boxers and both are gifted with above-average physical strength and hand speed. McAllister was a little quicker and a bit more aggressive, especially when they engaged in close, but Quigley defended well in the trenches and he used his experience to slow down the tempo of the session when he needed to. (Check out the video I took with my trusty iPhone.) 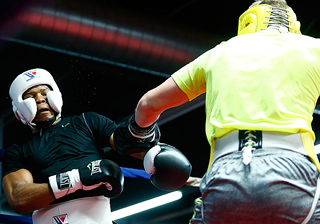 Both flashed stiff jabs, both possess accurate one-two combinations and both know how to go to the body. It seemed to me that McAllister outworked Quigley when he got him up against the ropes, especially in Rounds 4 and 5 when the Irishman was a bit winded and arm weary.

However, Quigley appeared to be in control for most of the session thanks to economical punching, lateral movement, inside maneuvering and decent ability to fight off the ropes.

(Forgive the poor quality of this short video below. I shot it with my iPhone and I’m rusty when it comes to capturing sparring footage. However, you can see from this clip that Quigley is trying his best to emulate the Mayweather-popularized shoulder-roll defense while in the corner. Will he ever master it? Time will tell.)

I sat down with Lopes after watching the Quigley-McAllister sparring session and chatting a little bit with Sheer. I knew the 26-year-old southpaw was one of the better amateurs produced by Brazil in recent decades just based on his stats – spots on the 2008 and 2012 Olympic teams, a 2011 world amateur championships gold medal, and a reported 240-10 record – but I have no idea what to expect from him as a pro because I’ve never seen him fight.

The young man who translated our interview, an amateur boxer from Dallas named Mario Alvarado, told me Lopes fights a lot like junior featherweight champ Guillermo Rigondeaux. So I asked Lopes if he thought his style resembled that of the Cuban amateur great. 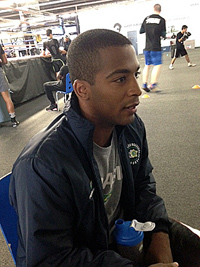 “Yes, I guess you could say that it’s similar to Rigondeaux’s but it’s different in a few ways,” he said with a chuckle. “I had a Cuban coach for awhile and I learned all that I could from, but I think my style is more like Erislandy Lara’s, only I’m more active.

“I respect Lara and Rigondeaux but I want to be better than them. I’ll give the public more of what they want to see.”

The public might get a chance to see Lopes’ pro debut, which takes place on Feb. 27 at Fantasy Springs Resort Casino in Indio, California. With the main event of that show – Randy Caballero’s IBF bantamweight title defense against Alberto Guevara – falling out due to an ankle injury suffered by the hometown hero, there’s a good chance the Lopes fight could make the Fox Sports 1/Fox Deportes broadcast.

Lopes, who will campaign at lightweight, says he doesn’t want fans to view him as an amateur star. He wants to earn their respect with what he does as a pro.

“I’m proud of what I did in the amateurs, representing Brazil to the rest of the world, and beating the best boxers from Ukraine, Italy, Hungary and other nations, but that’s all in the past now. I feel like I’m starting over again. It’s like Feb. 27 will be my first fight.

“It’s going to be very emotional for me because it’s a dream to make my pro debut fighting for a great company like Golden Boy Promotions and to have a great team behind me. My trainer, Manny Robles, is like my father. I trust him with everything and I’m confident that I’ll be a champion at lightweight with him in my corner.” 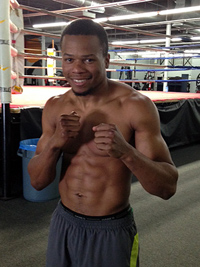 Before I left the gym, I spoke with Bennett and asked him if he could send me some of the photos he took of Quigley and McAllister sparring. Bennett, who works for Al Haymon (who has McAllister, Gausha and about 150 other boxers under contract as you all know), had no problem doing so because he’s a swell guy.

Now I know to some hardcore fans Haymon is boxing’s version of Darth Vader and anyone working for him is f___ing with the dark side of the Force. But none of that nonsense matters in the gym. Yeah, there are a few high-profile gyms – such as the Wild Card and Mayweather Boxing Clubs – where boxing’s tribalism and politics come into play (for obvious reasons), but most gyms are neutral ground and there’s nothing but respect among the boxers (amateur and pro), trainers, managers and observers like Yours Truly.

I saw some promising amateurs working out at The Rock the day I visited. Bennett and McAllister told me that Jackrabbit Boxing Gym in Long Beach also had a thriving amateur program. That made me smile. Those kids are the future of the sport. I told Bennett I’m looking forward to visiting Jackrabbit Boxing, and I said I’d be stopping by The Rock more often.