Adviser: Mayweather-Pacquiao ‘no factor’ in Cotto’s next move 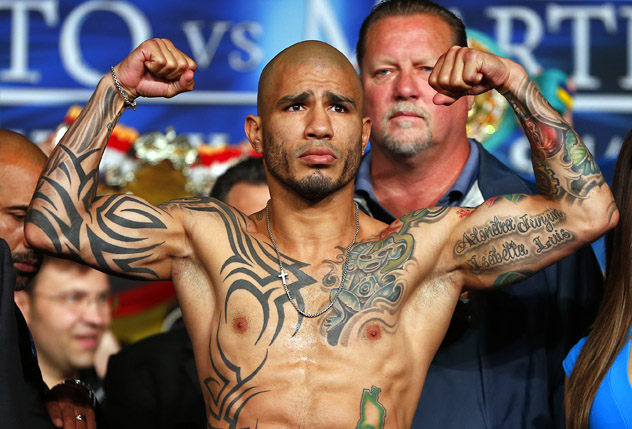 RING middleweight champion Miguel Cotto expects to return to the ring “most likely in May or June” against an opponent to be determined, the boxer’s adviser, Gaby Penagaricano told RingTV.com on Tuesday.

“Basically we’ve always said that Miguel going to fight in the summer, most likely in May or June,” said Penagaricano of Cotto, whose failed negotiations with RING No. 1-rated junior middleweight Canelo Alvarez resulted in the latter’s scheduling a fight against hard-hitting southpaw James Kirkland potentially in May.

Although Cotto has many “other options” besides Alvarez, Penagaricano said the Puerto Rican four-division titlewinner’s next move won’t depend on the results of the ongoing talks for a May 2 bout between Manny Pacquiao and Floyd Mayweather Jr., the latter of whom unanimously decisioned Cotto in May 2012.

“That’s no factor at all,” said Penagaricano. “Our decision will have nothing to do with that, but I don’t want to go into potential opponents yet.”

The 34-year-old Cotto (39-4, 32 knockotus) was last in action for a 10th round knockout of Sergio Martinez, whom he dethroned as RING champion by dropping him four times during their bout in June at New York’s Madison Square Garden.

Cotto became the first Puerto Rican fighter to win a fourth title in as many weight classes following an event that took place the night before the Puerto Rican Day Parade.

Penagaricano confirmed that New York is among the potential locations for Cotto’s next bout, given that he is 10-1 with six knockouts in The Big Apple, and 8-1 with five stoppages at The Garden.

“We’re looking at different places,” said Penagaricano. “That’s why I’ve said that it is not necessarily going to be New York. Maybe it’s New York, but that’s not [a confirmation.]”