Pacquiao on Mayweather Jr.: ‘I’m thinking that the fight will happen’ 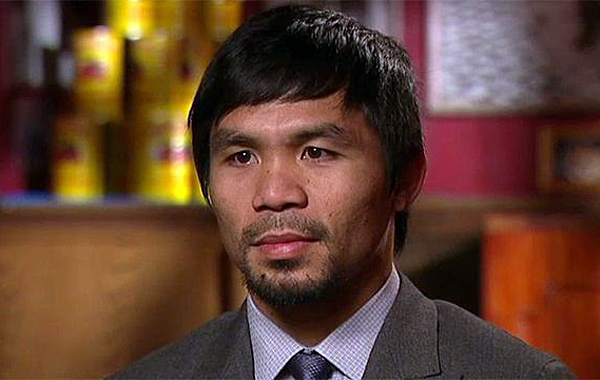 Manny Pacquiao said he believes that his May 2 clash with Floyd Mayweather Jr. “will happen” during a Sunday interview with Chris Wallace of Fox News Sunday, expressing optimism that their bout planned for the MGM Grand in Las Vegas will be announced “within one week.”

“I’m thinking that the fight will happen,” said Pacquiao, in part. “So hopefully by — when we — within one week, though, we can hear from them and fix the fight…I don’t want that when I retire boxing, and there’s a big question to the minds of the fans.”

Pacquiao’s assertion came a day after one by Mayweather on his official instagram page, where the undefeated fighter wrote “From the looks of this video, I’m telling Manny Pacquiao that we have to give the world this fight.” Mayweather did so while posing a short clip of his hour-long, face-to-face meeting with Pacquiao on Jan. 27.

Mayweather’s move follows a similar posting on his Shots account on Thursday, when he provided a photo of himself with Pacquiao, whom he spoke with in a Florida hotel, and claimed, “I set up this meeting with Manny Pacquiao to get this fight done but they will continue to tell the public it’s us and that’s NOT TRUE.”

Mayweather’s Thursday post occurred on the same day that Pacquiao’s promoter, Top Rank Promotions CEO Bob Arum said HBO, which has Pacquiao, and Showtime, which televises Mayweather, had agreed on how they would broadcast the May 2 fight and that only two remaining issues need to be settled.

Despite Arum’s claims, he is not involved in negotiating the agreement between HBO and Showtime, according to the report, in which Arum’s assertions were also disputed as being “premature” by Showtime’s Stephen Espinoza.

Mayweather has fought four of six bouts thus far to satisfy a multi-million dollar agreement with Showtime and its parent company, CBS Corporation and HBO televises most of Pacquiao’s bouts. The joint venture the networks are trying to work out is similar to that which produced a fight between Lennox Lewis (HBO) and Mike Tyson (Showtime) in June 2002.