Billy Joe Saunders talks about stepping aside for Lee-Quillin 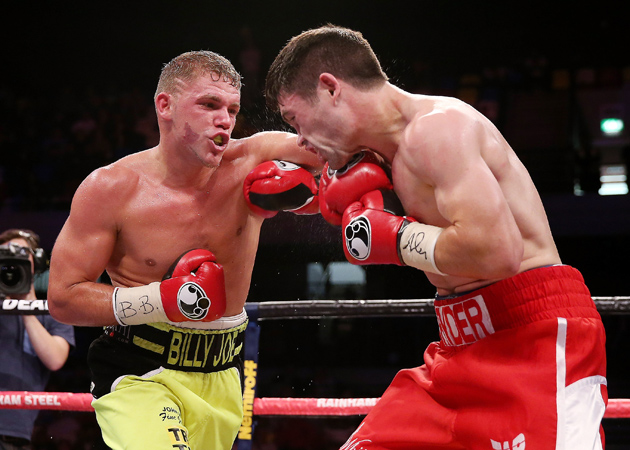 “As any boxer would if they had the opportunity to fight for the world title, they would want it immediately,” said Saunders, a 25-year-old southpaw. “That’s the business we’re in. I want to prove that I’m the best in the world and I believe that I can beat Lee or Quillin right now.”

Lee (34-2, 24 knockouts) is defending the belt initially held by Quillin (31-0, 22 KOs), who vacated in September rather than face then-beltholder Matt Korobov. Lee, 30, is coming off November’s sixth-round technical knockout over the previously undefeated Korobov for the vacant title. Quillin, 31, stood to make a career-high $1.4 million for the defense against Korobov, which he turned down.

The agreement between Quillin and Lee averted a WBO-ordered purse bid between Lee and Saunders, who is promoted by Frank Warren.

“Frank is right in that the fight between me and Lee, if [Lee] defends his title against Quillin, will be a massive fight,” said Saunders, who is rooting for Lee toward the opportunity to face him in their native United Kingdom. “It needs to be held on the biggest stage and that’s a football stadium. The fight will only get bigger and bigger. So the timing needs to be right and it needs to wait until the summer.”

Although the date and venue were not confirmed, Lee-Quillin reportedly could support a 143-pound clash between RING junior welterweight champion Danny Garcia and No. 2-rated IBF titleholder Lamont Peterson on April 11 likely at Barclays Center in Brooklyn.

Saunders could make his American debut on the undercard, according to Warren’s release.

“Whilst I’ve got to be patient for my world title shot, the chance to fight in New York in my first pro fight in the US is a dream I’ve had since I started boxing and it’s massive buzz for me to show my skill in front of the American fight fans,” said Saunders, of the WBO belt that has been worn by Nigel Benn, Chris Eubank, Steve Collins, Oscar De La Hoya and Bernard Hopkins. “To fight for the WBO middleweight belt that has been held by British greats like Benn, Eubank, Collins and also Chris Pyatt, plus legends like De La Hoya and Hopkins is what I’m in this sport for – history and glory.”

Saunders is coming off November’s split decision victory over previously undefeated Chris Eubank Jr., representing his fourth consecutive win over an unbeaten fighter. Eubank had followed unanimous decisions over Gary O’Sullivan and John Ryder in July and Sept. 2013, respectively, as well as an eighth-round knockout of Emanuele Blandamura last July.