Manager: Chris Avalos is ‘ready to rock’ vs. Carl Frampton 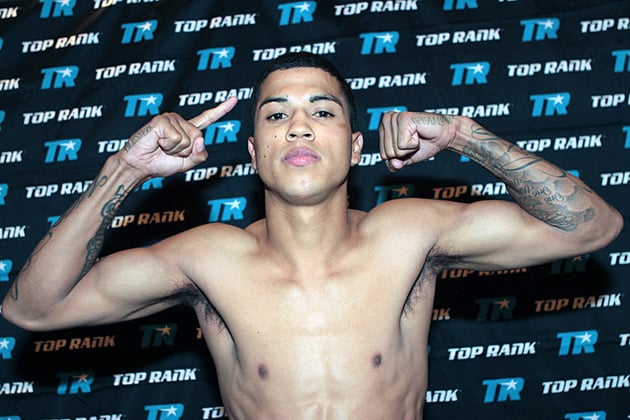 “Chris is ready to rock,” said Criscio of Avalos, who has been sparring twice weekly at the Wild Card Boxing Club in Hollywood, Calif., as well as training at the Durango Boxing Club. “I think Chris will dominate Frampton. Chris is very tough, strong, has a lot of pride and is hungry to win a world championship.”

RING No. 5-ranked junior featherweight Avalos (25-2, 19 knockouts) had been the mandatory challenger to the WBO belt held by RING champion Guillermo Rigondeaux, who also holds the WBA title. In September, however, Avalos declined a planned Nov. 22 bout against Rigondeaux that was targeted for either Miami or the Dominican Republic, according to a Tweet by WBO President Paco Valcarcel, doing so to pursue a shot at Frampton (19-0, 13 KOs).

“Carl Frampton is a terrific young champion but with Chris’ punching power it really doesn’t matter where the fight is. The partisan crowd won’t affect Chris at all,” said Carl Moretti, vice president of boxing operations for Top Rank Promotions. “He has one goal: to become the new IBF champion. There will be plenty of celebrating after the fight but it will be Chris and his team having the honors.”

Avalos, 25, has won six consecutive fights, four by knockout, including stoppages in the past three since losing a split decision to Jhonatan Romero in Dec. 2011. Avalos is coming off November’s fifth round knockout of Jose Cen Torres.

Avalos became the IBF’s mandatory challenger with his eighth-round stoppage of Yasutaka Ishimoto in May at a time when the organization’s beltholder still was Kiko Martinez.

Martinez secured an exception from the IBF to face Frampton rather than Avalos and lost his title to Frampton via unanimous decision in a September rematch of Frampton’s ninth-round stoppage win from Feb. 2013.

Although RING No. 1-rated Frampton, 27, was injured in the bout with Martinez and was expected to be sidelined until November, IBF Championships Chairman Lindsey Tucker informed RingTV.com that he was contacted by Top Rank regarding its pursuit of a fight with Frampton.

“I’ve been working on using a lot of combinations,” said Avalos. “I used to be straight-ahead brawling but we’re boxing more, throwing more jabs, mixing it up.”