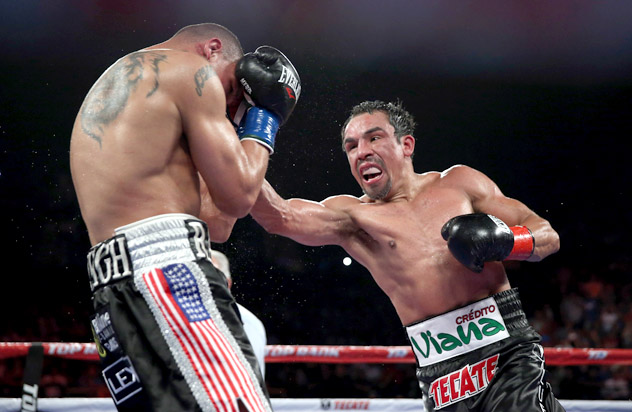 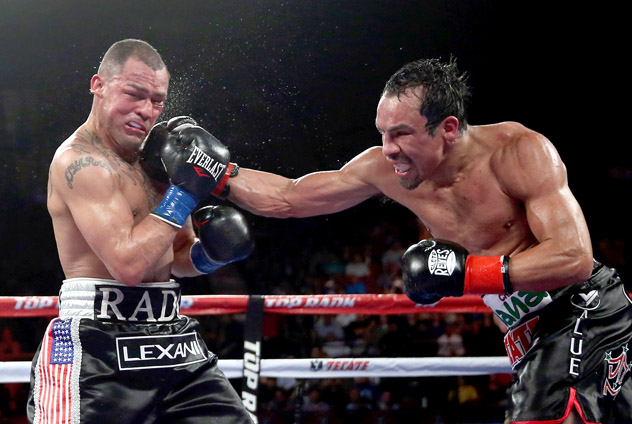 Juan Manuel Marquez (R) connects with one of the many punches that landed on Mike Alvarado in May 2014. Photo by Jeff Gross / Getty Images

Marquez (56-7-1, 40 knockouts) will be ringside at the O2 Arena in London on Saturday to support Mexican lightweight Daniel Estrada, who will be trained by Marquez’s legendary corner man Nacho Beristain against British contender Kevin Mitchell.

While in town, Marquez, 41, might speak with Brook’s promoter, Eddie Hearn of Matchroom Sport, according to Beltran. Brook is THE RING’s No. 2-rated 147-pounder while Marquez is currently rated at No. 5.

“Juan Manuel is in England, right now. He and I promote Daniel Estrada. That’s the main reason for his trip to England,” said Beltran. “But he would love to fight Kell Brook, because he wants the welterweight title. So when he returns, we’ll talk.”

Marquez has twice challenged for the WBO welterweight title, losing by majority decision to Manny Pacquiao in November 2011, and by split decision to Tim Bradley in October 2013. In between those losses, Marquez unanimously decisioned Sergei Fedchenko for the WBO’s junior welterweight belt.

“Of course he wants another opportunity, and he knows that Eddie Hearn has a good relationship with us, as well as with his co-promoter, (Top Rank CEO) Bob Arum,” said Beltran. “He would love the promoter of Brook, Eddie Hearn, to get in touch with Arum. But he would consider that a challenge.”

Brook had scored four consecutive stoppage victories entering his last bout, when he won the title by majority decision over previously undefeated Shawn Porter in August. Brook, 28, is scheduled to fight Dan (34-2, 18 KOs) at the Motorpoint Arena in Sheffield, England.

In May, Marquez swapped knockdowns during a unanimous decision over Mike Alvarado to rebound from the loss to Bradley. Prior to facing Bradley, Marquez knocked out Pacquiao in the sixth round of their fourth bout, improving his mark to 1-2-1 against the Filipino.

Ideally, Beltran said Marquez would take a tuneup fight before facing Brook, and would not be averse to a rematch with Bradley or a bout with Brandon Rios, who knocked out Alvarado in three rounds this past Saturday.

“Bob (Arum) has a good relationship with Eddie Hearn, so Bob would be the negotiator. But there are many fights out there. Brandon Rios looked pretty good last Saturday, so Brandon Rios is one of the fights that is out there,” said Beltran. “Manny Pacquiao is out there if he doesn’t fight Floyd Mayweather. The rematch with Bradley is another possibility. There is Kell Brook. There are many possibilities.”