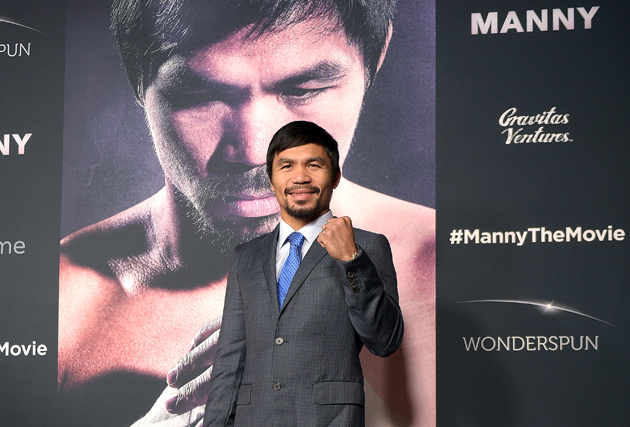 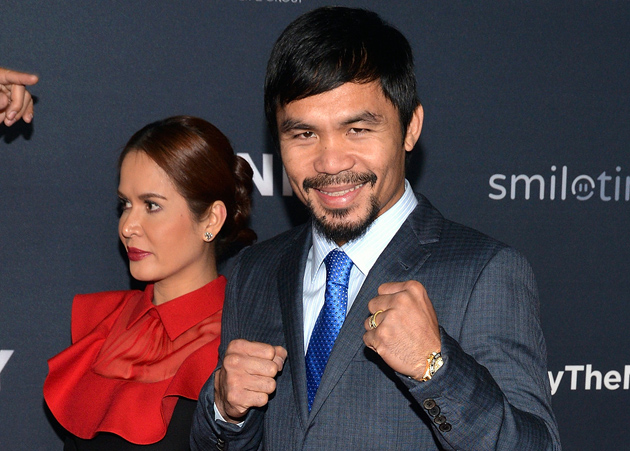 Manny Pacquiao poses at the premiere of the film ‘Manny,’ about his amazing life. Andreas Hale hoped to learn more about Pacquiao’s personal relationships, such as with his wife, Jinkee (pictured). Photo by Michael Tullberg / Getty Images

Manny Pacquiao’s entire life has been about overcoming what appear to be insurmountable odds.

As popular as Pacquiao has become, we have only had the opportunity to see the surface of the fighter, humanitarian and politician as he leaps over the hurdles placed in front of him. But what makes Pacquiao intriguing is what we don’t know and the Ryan Moore and Leon Gast (of “When We Were Kings” fame) directed documentary titled “Manny” does an excellent job giving audiences a deeper look into the man but you are still left feeling that there is still something purposefully being hid behind the curtain.

For a film that has a running theme of Pacquiao’s David toppling the proverbial goliath, “Manny” begins ominously with the Filipino being knocked out cold by Juan Manuel Marquez. It’s a curious – and equally sullen – opening but as the film progresses it represents yet another obstacle that Pacquiao has to overcome in his life. And, in the grand scheme of things, it is far from the devastating blow that those on the outside perceived it to be.

“Manny” does a fine job traversing the subject’s 36 years of life by creating a constant atmosphere of being behind the 8-ball only to beat the odds with a welcoming smile. Whether it be his childhood struggles in the impoverished confines of the Philippines, chopping down the larger Antonio Margaritos and Oscar De La Hoyas of the world, or being elected to the Philippine House of Representatives, the film moves briskly but spends enough time building up each mountain for Pacquiao to climb.

But this isn’t a glowing review as we dig into Pacquiao’s troubled relationship with his wife, overwhelming responsibilities as a public figure and his tainted mindset entering the third fight with Marquez that led to a subpar performance that many thought wasn’t enough to earn the controversial split-decision victory.

We are granted that insight and it certainly paints an even keeled portrayal of a man who is flawed but does everything he can to be an inspiration to others. What’s missing is a lot of explanation from Pacquiao himself. And perhaps that is not due to the directors and has more to do with Pacquiao as the subjects of the film have more interesting anecdotes about the eight-division world champion than the fighter himself.

It would have been interesting to hear Pacquiao’s take on the strained relationship between his trainer Freddie Roach and advisor Michael Koncz. Or, his true thoughts on Floyd Mayweather Jr. and the fight that everyone wants to see. His explanation behind his marital problems and how it affected him feels equally as hollow and is only compelling when Jinkee Pacquiao reveals what went wrong in their relationship.

Ironically, it’s former strength and conditioning coach, Alex Ariza, who gives the most brutally honest and insightful look into the career of Manny Pacquiao. Whether he is being critical of Bob Arum and Michael Koncz or explaining his personal relationship with Pacquiao and watching him struggle to manage his many responsibilities, it’s Ariza voice – which was filmed before Ariza was fired – that is the most refreshing and is not trying to protect an image.

Nevertheless, there is enough insider substance to keep a longtime Pacquiao fan compelled. Footage of his early fights as a frail teenager with a wicked punch are packed into the documentary as well as some candid moments where Pacquiao is visibly burned out by his chaotic schedule. Again, it is more what we see from Pacquiao rather than what he says.

In the end, “Manny” is a film that provides a greater understanding of just how significant of a figure Pacquiao is to his country and the world of boxing. It could just use a little more heart from its subject.