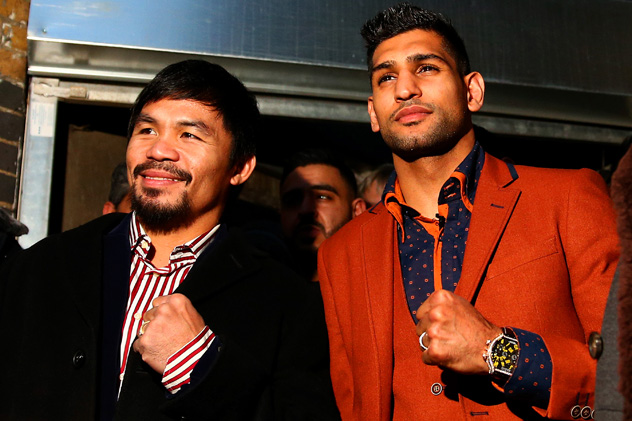 Manny Pacquiao (L) with Amir Khan on Jan 23. 2015, in London, where the two reportedly discussed the possibility of a May 30 fight. Photo by Dan Istitene/Getty Images.

Manny Pacquiao could pursue a May 30 clash with Amir Khan if Floyd Mayweather Jr. does not sign to face him on May 2 by the end of January, the Filipino boxer’s adviser, Michael Koncz, confirmed to RingTV.com on Saturday.

“We’re not slamming the door on it,” said Koncz, referring to Mayweather. “Hopefully, Floyd will agree and sign for the fight, and he and Manny will fight. But if not, we can’t just wait around.”

The contingency calls for Pacquiao to fight on May 30 on HBO Pay-Per-View, with London, Barclays center in New York, the Mandalay Bay in Las Vegas and Abu Dhabi being among the potential locations, according to a report by ESPN.com citing the boxer’s promoter, Top Rank CEO Bob Arum.

“Yes, we’re looking at the possibility of Amir Khan as a backup,” said Koncz. “That is, if the Mayweather fight doesn’t happen, and that date was mentioned, yes.”

Koncz spoke to RingTV.com before boarding an early Saturday morning flight from England, where Pacquiao was hosted by Prince Harry at Buckingham Palace on Thursday. Koncz declined to discuss the details of the meeting with Prince Harry, although Arum said it involved talks regarding a potential bout between Pacquiao and Khan.

“Yes, he met with Prince Harry, but that was a private dinner that we had, and I’m not disclosing what went on in that dinner,” said Koncz. “We’re looking at all possible opportunities, whether it be in England, whether it be in Abu Dhabi, or America. Wherever the fight is best suited.”

Other potential opponents for Pacquiao include RING No. 1-rated junior middleweight Lucas Matthysse and RING No. 4-rated 140-pounder Ruslan Provodnikov, according to Arum.

Matthysse recently signed a five-year contract extension with Golden Boy promoter Oscar De La Hoya, who has a renewed working relationship with Arum. Arum and Provodnikov’s handlers — Artie Pelullo of Banner Promotions, and his manager, Vadim Kornilov — have all mentioned Pacquiao as a desired rival in the past. The Matthysse and Provodnikov camps have also been in talks concerning a fight between those two.

Pacquiao (57-5-2, 38 knockouts) is reportedly agreeable to the demands of Mayweather (47-0, 26 KOs), which include fighting at the MGM, a 60/40 split of the purse in favor of the undefeated fighter and a drug-testing protocol.

With Mayweather being aligned with Showtime and Pacquiao with HBO, among the details discussed have been how the networks can jointly broadcast the bout. Officials from Showtime and HBO have reportedly discussed something similar to the Lennox Lewis-Mike Tyson joint pay-per-view broadcast in June 2002.

“We’ve got a long way to go,” said Espinoza during a Jan. 15 interview with RingTV.com, “and significant open issues to overcome.”

A 28-year-old former junior welterweight titleholder who has fought twice as a welterweight, Khan (30-3, 19 KOs) dominated left-handed former beltholders Luis Collazo and Devon Alexander in his past two appearances. Khan scored four knockdowns against Collazo during his 147-pound debut in May, and has similar success against Alexander, although no knockdowns occurred.

In the end, however, Pacquiao wants Mayweather.

“I think now that Floyd and me is going to happen,” said Pacquiao. “It looks like it.”

“We’re losing dates, we’ll lose training time, and if so, then that’s the way that it goes,” said Koncz. “But it’s very simple on the Mayweather fight. I’m hoping that he signs the contract and that he fights Manny on May 2.”