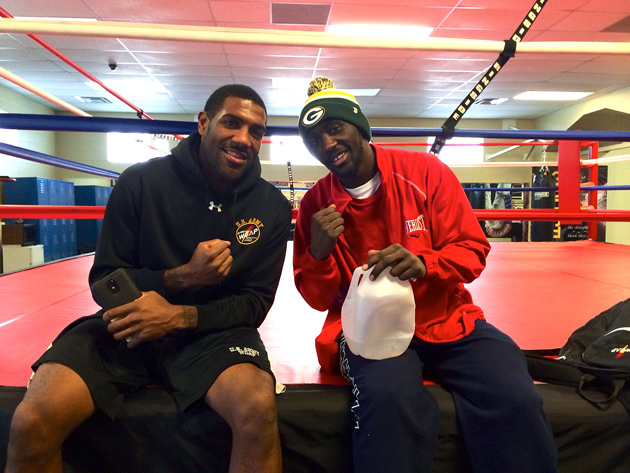 Steve Nelson and Terence Crawford go way back with each other. Back to hanging at the local park in Omaha, Nebraska, where they’re both from, playing basketball and talking boxing.

But life has an interesting way of twisting and turning things. When Crawford was 21, he was on his journey towards becoming boxing’s best lightweight. When Nelson was 21, he was dodging bullets and improvised explosive devices (IEDs) in Afghanistan.

Now the best friends find their paths intersecting once again.

Nelson is one of the best amateur light heavyweights in the United States with a chance to make the U.S. 2016 Olympic team. Crawford, as all fight fans know, is the reigning RING/WBO lightweight champion and one of the best young fighters in the world today.

It was Crawford, 27, who talked 5-foot-10, 189-pound Nelson, 26, into remaining an amateur roughly a year ago and to live out the Olympic dream. And it’s Nelson who is Crawford’s main sparring partner.

They both admit they wouldn’t be where they are without the other.

“We go back to childhood together; we have a close relationship, where we went to high school together and we’ve known each other for over 10 years now,” Nelson said. “I didn’t get into boxing until I was 21. Terence began boxing when he was 7. I was always interested in boxing. I just never pursued it like he did. But my life has always been a fight. I kept pushing boxing off, and pushing it off.

“I was big and chubby – I went into the army and lost the weight, and then I gained it back again. I came home during Christmas in 2009 and I looked back at what I’ve done, and the only thing I ever did was join the army. I was determined to do something.”

So he popped into a local gym when he was stationed in North Carolina. Nelson was an instant natural. Within the first weeks of training, other fighters in the gym were approaching Nelson asking him how long he had been boxing. He started in January 2010, and by February, he was competing. One of the first things he did was call his friend, Crawford.

“I called him and told him I was in,” Nelson recalled. “Then we got into talking about working out together. He joked how we were going to spar. Terence is a lightweight. At the time, I was going between super heavyweight and heavyweight. But he told me we’d spar. I’m a big guy, I was joking with Terence that I was going to beat him up. Boy, was I in for a rude awakening. He was stronger, faster and smarter than me in the ring. I remember he hit me once with a body shot. I had to take a knee. But I kept coming back, and Terence brought my level up – a lot. I got better, and better. When I made the Army boxing team, Terence started getting bigger and better fights.”

“What I always liked about Steve is he was never a follower; he had his own identity; he didn’t want to be like anyone else,” Crawford said. “Steve is my chief sparring partner when I’m getting ready for fights. He’s very good in every aspect, and though he’s very young in the sport, he learns quickly. What you show him, he gives right back to you. That’s what makes him so successful, because he adapts very well. I can see Steve representing the United States in Brazil, because I see his dedication and commitment. I told him to try out for the (U.S. Olympic) team in 2016. I’m proud of him and what he’s accomplished. He’ll win the gold.”

But Nelson, you sense, still sees faces. The ones that didn’t come back from Afghanistan. He saw action deployed with a Special Forces group working in communications, responsible for linking radios with satellites. He walked out during the 2013 film “Lone Survivor,” because it reminded him too much of the real thing.

“There were guys I knew that we lost and you remember them; we’re all brothers and it’s like losing a family member,” Nelson said. “It’s what we sign up for and when you fight for your country. There are some things you have to deal with that are part of the job, death is one of them. I remember a mission we were on in an armored truck when we took fire. I was lucky to make it out of that. Those are the things you can’t forget.”

Nelson plans on making more memories – positives, indelible memories in 2016. Crawford plans on breaking off a block of his busy schedule to be there ringside in Rio for his friend, like Nelson was there in Scotland, last March, when Nelson beat Ricky Burns for the WBO lightweight title.

“A little over a year ago, I wanted to go pro, but Terence talked me out of it,” Nelson said. “He told to stay the course and he told he didn’t think anyone in the U.S. is better than me. He wants me to get that gold medal. I want that gold medal. I’m someone that once I decided to do something, I do it. Ever since then, everything has been going right, and I listen to Terence, because he has been there and done that. I give him great sparring work. The things I learn from him I can’t learn anywhere else.”

It goes both ways.