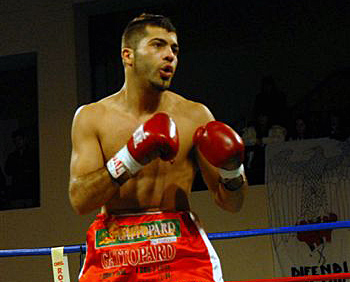 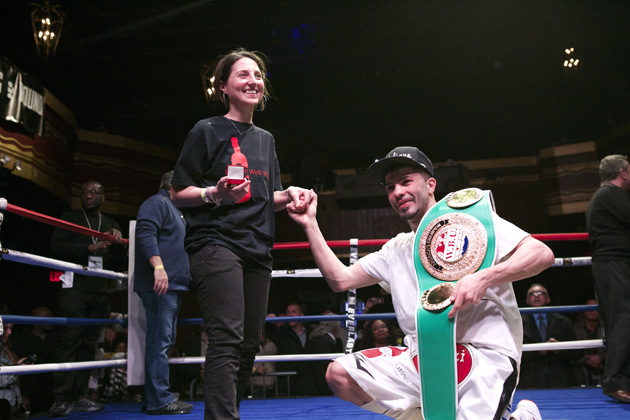 NEW YORK CITY – It’s always nice when the fighter and a member of the audience can each take home a piece of jewelry after a fight.

On Thursday, at a packed Webster Hall nightclub, Italian featherweight Floriano Pagliara (16-7-2, 6 knockouts) defeated an over-matched Antwan Robertson (9-13-1) in an eight-round unanimous decision to win a minor “world” title belt. Then while clutching his belt close to his chest, Pagliara promptly got down on one knee and proposed to his girlfriend in front of fans and supporters waving the Italian flag.

It was a complete shutout for the Pagliara, who won unanimous scores of 80-72.

Pagliara had Robertson on the ropes and in trouble in Rounds 4 and 5 and that’s when Robertson stopped throwing punches altogether.

Referee Sparkle Lee warned Robertson and the corner at the end of Rounds 6 and 7 that the fight would be stopped unless the fighter started to throw punches. Robertson would comply and then go back on his bicycle making Pagliara chase him down with a flurry of combinations.

“This is the first time I fought someone who refused to hit me back,” said Pagliara “All I can do is keep doing my job and get better.”

The fight, promoted by Dmitriy Salita’s Star of David Promotions, was part of an action-packed night of boxing which thrilled fans including former champions Paulie Malignaggi, Iran Barkley, Junior Jones and Bobby Czyz.

Salita dedicated the entire night to the memory of the two fallen NYPD officers, who died while sitting in their patrol car in Brooklyn last month.

“I am proud to have the opportunity to do something like this for the NYPD and I credit Junior Wright for the idea,” Salita Said.

Wright (13-0-1 11 KOs), a top American Cruiserweight from Chicago, was the night’s showstopper by defeating Rayford Johnson (10-18, 5 KOs) by second-round TKO in the co-main event.

Wright was deadly accurate as he stunned Johnson with a barrage of left handed uppercuts. Johnson was not able to defend himself and could not even try to clinch as Wright continued to dig hooks and uppercuts until the referee jumped between them to waive the fight off and save Johnson from getting seriously hurt.

“I think I was very patient tonight,” Wright said immediately after the stoppage. “I didn’t think it would end quickly but he gave me the opportunity.

“Junior is a very exciting fighter,” said Salita. “I am glad the fans got see him in action tonight.”

Wright is no stranger to giving the fans action. It was last year at another card promoted by Salita that Wright and Steve Bujaj fought to a split-decision draw in a fight of the year candidate.

“That’s why I enjoy coming to these type of fight cards,” said Malignaggi. “I will continue to support Dmitriy’s shows because not all fights are on a big stage with bright lights. Some of the best fights happen in clubs and venues like this one.”

Fans were treated to a little of everything on the undercard.

From heavyweights Ytalo Parea (5-1-1, 3 KOs) and Emilio Salas (1-1-1) slugging it out for four rounds in a split-decision draw to some displays of big punching power by junior middleweight Gary Beriguette (6-0, 4 KOs) who punished his opponent from Mexico Rafael Luna until the doctor stopped the fight at the end of Round 4. Luna, with blood flowing from both his nose and left eye lid, asked to come back out for Round 5 but relented after the referee called the fight.

Perhaps the fighter who may have stole the show was the southpaw welterweight prospect “Trigger” Tre’Sean Wiggins (6-1, 5 KOs) who got the crowd in a frenzy with a first-round knockout of Ilyas Aksabaev (1-2-1).