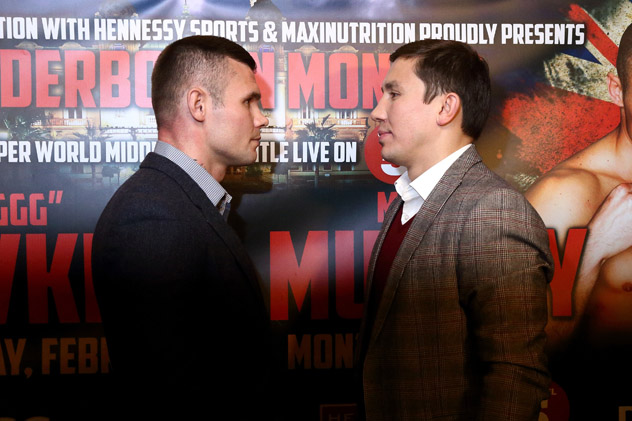 Golovkin is also the holder of the interim belt for the WBC, which mandates that its 160-pound division boxers weigh no more than 176 pounds 30 days prior to their scheduled fight.

“Both of these fighters are in excellent shape,” said Berman, in a release, “and boxing fans around the world will be in for an outstanding battle in boxing’s most glamorous division on Feb. 21.”

The win by Murray, 32, was his fourth straight since losing a unanimous decision to then-RING champion Sergio Martinez, whom he dropped in Round 8 of a failed bid to earn the WBC belt in April 2013. The title challenge will be the third for Murray, who also battled to a draw with ex-titleholder Felix Sturm in December 2011.

“The interest from the fans and media worldwide has been extraordinary for this event,” said Loeffler. “Golovkin and Murray are exceptionally well-conditioned athletes and each will be ready on Feb. 21 to prove who the best middleweight in the world is.”

In his last fight on Oct. 18, Golovkin, 32, stopped Marco Antonio Rubio in the second round, representing his 18th consecutive knockout victory and the 12th defense of his title.

The win over Rubio was the third of 2014 for Golovkin, who had knocked out Osumanu Adama in the seventh round last February, and ex-beltholder Daniel Geale in the third round in July.