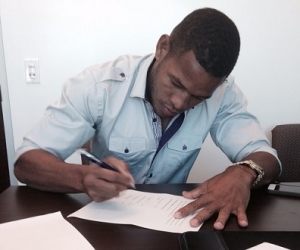 Undefeated light heavyweight Sullivan Barrera will face former super middleweight titleholder Jeff Lacy on the Jan. 30 undercard of a main event between Karl Dargan and Tony Luis at the Foxwoods Resort in Mashantucket, Connecticut, Main Events CEO Kathy Duva informed RingTV.com on Tuesday. The card will be televised on ESPN2.

A 32-year-old native of Cuba now living in Miami, the 6-foot-2 Barrera (14-0, 9 knockouts) scored his third straight stoppage against Rowland Bryant on the undercard of Sergey Kovalev’s unanimous decision over Bernard Hopkins in November.

Along with Kovalev, who added Hopkins’ IBF and WBA belts to the WBO title he already owned, Barrera is part of a deep pool of 175-pounders promoted by Main Events.

“I’ve been in camp since the week after my last fight in November,” said Barrera, who will be in his third fight under trainer Abel Sanchez, who also works with RING No. 1-rated WBA middleweight titleholder Gennady Golovkin. “Camp was excellent. I had the chance to work on a lot of different things. I want to thank my team members, including the one and only GGG , who’s taught me a lot. I am very thankful to have such a great team.”

Since then, Lacy has lost by unanimous decision to Jermain Taylor on November 2008, and by 10th round stoppage against Roy Jones Jr. in August 2009. Lacy is coming off a unanimous eight-round decision over Timothy Hall Jr. in December to rebound from a second-round technical knockout loss to Umberto Savigne in July.