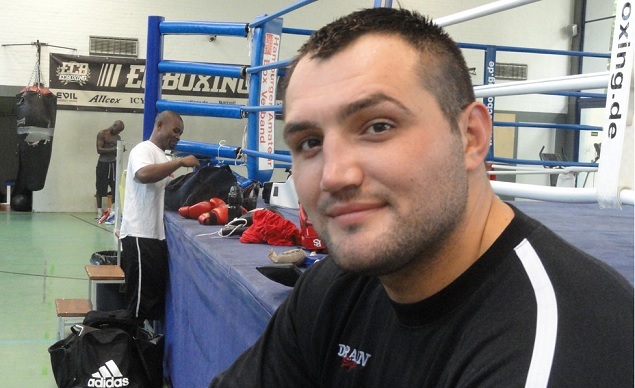 Undefeated British heavyweight Tyson Fury, the mandatory challenger to RING champion Wladimir Klitschko’s WBO belt, “has made a big, big mistake by choosing to fight me,” said hard-hitting Christian Hammer of Germany, whom Fury will face on Feb. 28 at the O2 Arena in London.

“I feel that’s he’s made a big, big mistake choosing to fight me but full respect to him,” said Hammer, in a release from promoter Frank Warren after meeting Fury face to face in a Tuesday press conference in London.

“He could have avoided me and chosen a much easier opponent and keep his record and [British and European] titles intact and also his world title fight against Klitschko. But at the O2 arena on Saturday 28th, February, I must bring his dreams crashing down around him. Make no mistake; I’m coming here to do one thing and one thing only: to beat Tyson Fury and earn my right to fight Klitschko.”

Fury (23-0, 17 knockouts) is coming off November’s 10th-round stoppage against countryman Dereck Chisora, whom Fury had beaten by unanimous decision in July 2011 when the fighters entered the bout with identical 14-0 records.

In addition to Klitschko, Fury longs for a potential bout opposite Deontay Wilder, whose unanimous decision dethroned Bermane Stiverne for the WBC belt on Saturday.

“Wilder did a good job at the weekend on Stiverne and he’s lit up the heavyweight division. But without a doubt, Klitschko is the No. 1 and the linear champion,” said Fury, 26, who took Chisora’s European title and also won the vacant British title for a second time.

“Naturally, you want to beat the man who beat the man, so [Klitschko]’s my first choice. Then I’d love to meet Wilder, who’s made some noises after his win about facing me, which I’ll gladly accommodate but let Wilder bask in his moment of glory for a while longer because that will soon come to an end.”

“I won’t be taking Hammer for granted; this is a very risky fight for me and the fights against Klitschko or Wilder won’t be happening if I don’t beat Hammer. He’s by far the most accomplished fighter I fought in my career. I’m very familiar with him from the amateurs and I’ve kept an eye on him in the pros and he’s had some good recent wins including Kevin Johnson,” said Fury.

“He’s a strong puncher and moves well on his feet for a big lad. He fancies his chances against me and remember in the heavyweights it only takes one punch to turn things upside down. But this is Tyson Fury we’re talking about and as long as I’ve got gloves and a fighting heart, there’s no man that will have the beating of me. I will fight and fight. I’ll get up to win. But there’s no one who will keep me down. I’m a winner.”

Also the holder the IBF and WBA titles, Klitschko is in line for an April 25 defense against Bryant Jennings at New York’s Madison Square Garden.

“Inactivity is the worst thing for a boxer. The name of the game is to keep busy and Tyson can’t sit around waiting for Klitschko, so he’s taking this very dangerous and risky fight against Hammer…Tyson has everything to lose and Hammer has everything to gain from this, so Tyson knows what is on the line and what he stands to lose. But you just can’t bet against a man like Tyson,” said Warren.

“The heavyweight division has certainly come alive again with Wilder’s win over Stiverne at the weekend and it’s definitely spiced things up and brought back some much-needed excitement into boxing’s flagship weight class. The heavyweights have become fashionable again with Wilder and Fury in the top of the mix and whilst I don’t want to look beyond Hammer, the thought of Fury against Wilder over here in the UK would be the biggest heavyweight fight in the last 10 years.”