Miguel Cotto is a viable option for Floyd Mayweather Jr. 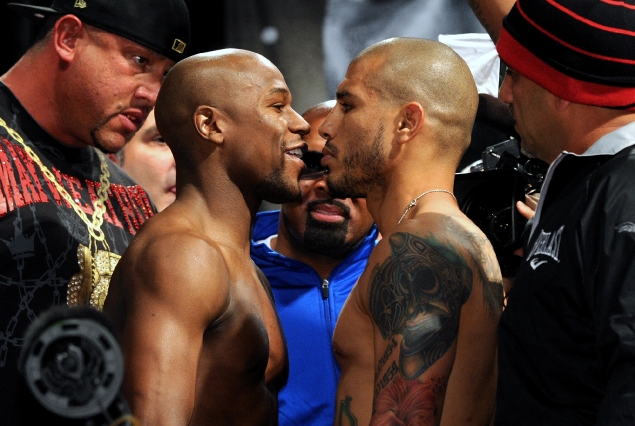 A rematch with Floyd Mayweather Jr. is “probably the biggest fight out there” for Miguel Cotto if the Puerto Rican star’s talks failed to produce a May 2 bout against Canelo Alvarez.

“We’re interested. If we end up not fighting Canelo because we can not agree on terms, then everything is on the table – and that includes Mayweather, if we can make a deal. No opponent is off the table,” said Penagaricano at the time in regard to Cotto, who lost a majority decision to Mayweather in May 2012.

“I haven’t discussed with Miguel that, ‘If we cannot make a deal with Canelo, would Floyd be next?’ But obviously, I know Miguel and he’s made it very clear that he would only be interested in the biggest fights possible. So obviously, the Mayweather fight is probably the biggest fight out there. Again, I have not spoken to Miguel about it but I would think that if the Mayweather fight was available, that he would be interested in it.”

Fast forward to today, when Golden Boy Promotions President Oscar De La Hoya announced to reporters in Las Vegas that Cotto had turned down a “great” offer from Alvarez, who had set a deadline, last night.

Couple that development with the fact that ongoing negotiations for a May 2 clash between Mayweather and Manny Pacquiao have “a long way to go,” according to Showtime’s Stephen Espinoza, and Penagaricano’s assertions may have some new validity.

Adding to that intrigue is the fact that De La Hoya reportedly Tweeted on Jan. 15 that he would not be surprised if Cotto fought Mayweather, presumably meaning if the negotiations with Alvarez failed.

Penagaricano characterized a return bout with Mayweather as “a possibility” when asked about it on Saturday, that is, if Mayweather-Pacquiao does not come to fruition.

“There is a possibility. I am not sure what the status of the negotiations for that fight [Mayweather-Pacquiao] is or where they are at but anything is possible if we’re not fighting Canelo,” said Penagaricano. “I mean, we’re going to meet with Miguel next week and we’re going to go through everything and determine what the options are and we’ll go another route.”

Has either Mayweather or his adviser, Al Haymon, reached out to Cotto regarding a rematch?

“Not regarding the fight,” said Penagaricano during an earlier interview with RingTV.com. “Obviously, I have a lot of other business with Al but we talk about other fights. Everybody is trying in good faith to make the biggest fight possible.”

Alvarez had agreed on Dec. 9 to his side of the terms to face Cotto, according to De La Hoya, and Penagaricano admitted the deal as being only “50 percent” complete at the time.

“Miguel is in a pretty comfortable position where if the deal is not done to where he wants it to be, then there is no fight and that’s exactly what happened. I respect and understand that Oscar needs to make a decision because he wanted to do something else or maybe has a deadline or some time constraints and some tight pressures,” said Penagaricano on Saturday.

“So if that is the case, then he has every right to move and we respect that. It’s perfectly fine with us. We gave it a good-faith try and we couldn’t do it. There are no ill feelings at all; it’s OK. It’s financial, obviously, and had they had more time to negotiate, there was a possibility that we could reach a deal and there as a possibility that we didn’t. But it’s their right and their decision if they needed to move.”

A promotional and network free agent, Cotto’s bouts were handled by Golden Boy when he lost consecutive unanimous decisions to Mayweather and Austin Trout on Showtime. Cotto was aligned with Top Rank and HBO for his past two victories over Delvin Rodriguez and Sergio Martinez.

Mayweather is aligned with Showtime, having fought four of six bouts thus far to satisfy a multi-million-dollar agreement he signed with the network and its parent company, CBS Corporation. Alvarez had fought on Showtime since September 2012 until September of last year, when he signed a long-term commitment with HBO.

The Los Angeles Times, citing a high-ranking official close to the Mayweather-Pacquiao talks, reported that Penagaricano might seek Bradley rather than Mayweather for June. That same official said there’s a possibility that the Cotto-Alvarez discussions could resume next week.

A three-division titlist, Cotto (38-4, 31 knockouts), 34, has fought in New York 11 times, with nine of those appearances having been at Madison Square Garden. Whomever Cotto chooses to fight next, he won’t likely do it on May 2, unless, of course, that opponent is Mayweather.

Already THE RING’s No. 1-rated fighter pound-for-pound as well as THE RING’s champion at 147 and 154 pounds, Mayweather (47-0, 26 KOs) could earn THE RING’s middleweight championship with a victory over Cotto as well as a title in a sixth weight division.