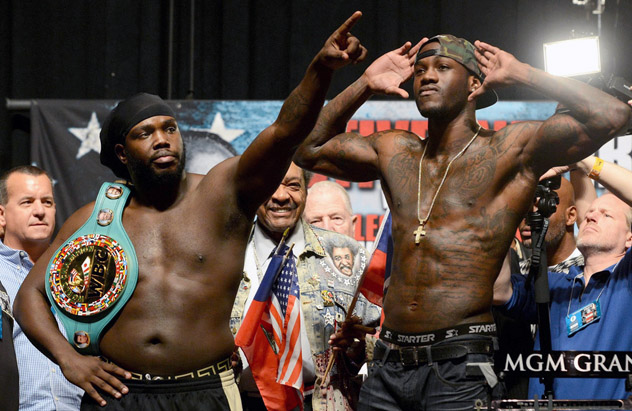 RingTV.com has a live round-by-round update of Saturday night’s heavyweight bout after which Deontay Wilder’s unanimous decision dethroned Bermane Stiverne as WBC titleholder. The fight was televised live on Showtime from the MGM Grand in Las Vegas.

While the 36-year-old Stiverne (24-2-1, 21 knockouts) was the first heavyweight beltholder of Hatian descent, Wilder (33-0, 32 KOs) became the first American to be a division titleholder since Shannon Briggs in 2007.

The Showtime broadcast begins at 10 p.m.

Round 1 Neither fighter looked the other in the eyed during the introductions. The fighters are at the center of the ring. Wilder fires a jab against Stiverne’s gloves, and then five more. Wilder staying behind the jab. Stiverne has a high guard and steps forward. Wilder fighting tall, eludes a short rush by Stiverne. Stiverne starting to feint with purpose. Right by Wilder lands.Wilder hooks off the jab and jabs once more. Wilder staying off the ropes. Left and two rights land for Wilder and then a Wide right by Wilder. Hook and a right graze for Stiverne. A right lands again for Wilder, followed by the jab. Hook and a big right land for Wilder followed by a three-punch combination just prior to the bell. Wilder, 10-9.

Round 2 More jabbing for Wilder to start the second, all of the stiff variety. Stiverne still has a high guard and walks forward with decent pressure. Nice right uppercut by Wilder who eludes a left hook. Right to the body by Stiverne, who takes two jabs and a right. Stiverne misses a right and takes two hard rights and then two more. Stiverne took the punches well. Hook by Wilder and a right. Right to the body by Stiverne, who appears to be being patient. Right by Wilder and a jab, but he takes a hook. Wilder jabs and blocks two right hand. Wilder nails Stiverne with a right hand and a series of blows that wobble Stiverne. Stiverne is hurt after being drilled from a punctuating left hook and GOES DOWN from it, but TAKES DOWN Wilder with him on a double-leg takedown. Wilder, 10-9; Wilder, 20-18.

Round 3 Stiverne was clearly hurt at the end of the third, but referee Tony Weeks did not rule for a knockdown.Wilder nailing Stiverne with the jab and big rights that are beginning to split his guard. Good boxing skills for Wilder, who lands yet another right over the guard of Stiverne. Double-jab by Wilder and another sequence. Hard right to the head by Wilder, who takes a left, right and a left to the body.Two more one-twos by Wilder as Stiverne continues to wade forward. Two more wide rights by Wilder. Jab and right by Wilder. Three more jabs, two from long range, land for a dancing Wilder who mugs by sticking out his tongue prior to the bell.Wilder, 10-9; Wilder, 30-27.

Round 4 Wilder meets Stiverne at the center of the ring with three straight jabs before landing a couple of right hands.Wilder continuing to stick the jab and land the right as he takes a short left hook. Right to the body by Stiverne and he takes another Wilder jab. Two hard rights by Wilder, who takes a short left hook. Hook by Wilder and one by Stiverne.Wilder doing a good job staying off the ropes. Right uppercut for Wilder. Wilder blocks two right hands. Wilder covers up on the ropes and then goes to the body with a right hand. Wilder on the ropes. Takes a right and a left but resumes with the jab.Right and a left by Stiverne. Right by Wilder, who eludes a left. Right at the bell for Stiverne. Wilder, 10-9; Wilder, 40-36.

Round 5 Stiverne began to step up the pressure in the fourth, as Wilder enters the fifth round FOR THE FIRST TIME IN HIS CAREER. .Stiverne has been beyond four rounds seven times. Stiverne beginning to challenge the body, but takes a couple of one-twos. Wilder beginning to talk to Stiverne, but takes a double jab to the body.Right to the head by Stiverne. Wilder’s hands starting to drop lower. Jab and right by Wilder. Stiverne starting to pressure more and move his head. Right to the head after the body attack by Stiverne. Wilder nailing Stiverne with a succession of right hands that chase the champion to the ropes before stepping back. Smart move. Right by Wilder in retreat. Stiverne misses with a wild right and takes one just prior to the bell. Wilder, 10-9; Wilder, 50-45.

Round 6 It’s possible that both Stiverne AND Wilder have lost steam in their punches. Stiverne continuing to move forward appearing to search for an opening. Wilder continues to jab and move. Hard left hook by Stiverne wobbles Wilder, who grabs the ropes with his left hand. Wilder continuing to retreat. Left and a right land for Stiverne. Wilder back to jabbing and retreating. Best round so far for Stiverne. Wilder avoids another left hook.Wilder popping the jab yet takes two rights and two lefts to the body. Right by Wilder. Stiverne smiling at Wilder as he takes a right. Stiverne, 10-9; Wilder, 59-55.

Round 7 There was a noticeable change in tempo in the sixth in favor of Stiverne. Wilder continuing to jab, but his stance has widened. Stiverne trying to land the jab. SHOWTIME’S STEVE FARHOOD HAS IT FOR WILDER, 58-56. Left hook and right hand by Stiverne and he Wilder nails Stiverne with a bigiright hand and drives him backward and he’s going for the kill. Stiverne takes an uppercut, but appears to have recovered.Wilder nails and hurts Stiverne with another big straight right hand and a left hook that drive him backward and continues to pound away along the ropes. Over the final 40 seconds, Wilder nails Stiverne repeatedly with several wicked right hands and left hooks. Stiverne lands a left, but takes a hard right just prior to the bell. Wilder, 10-9; Wilder, 69-64.

Round 8 Fighters meet in the center of the ring Wilder commences with the jab and circles behind it. Farhood has it for Wilder, 68-65. Wilder still moving laterally and patiently behind a sustained stiff jab. Good boxing. Right to the body by Stiverne. Right and a left by Stiverne, but Wilder took steam off by with head swivels and continues to jab and retreat. Solid jabbing by Wilder and a right cross. Right and left to the body by Stiverne. Pace has slowed noticeably. Right to the body and uppercut to the head by Stiverne. Jab by Wilder, who eludes a left hook at the bell. Stiverne, 10-9; Wilder, 78-74.

Round 9 Wilder again meets Stiverne at the center of the ring, then jabs and retreats. The jab still is solid. Farhood has it for Wilder, 78-74. Wilder still effective with power and landing the right hand.Wilder has Stiverne backing up briefly with the jab and the right and an occasional body shot. Stiverne continuing to eat jabs. Wilder has landed 157 head shots to this point. Double-jab by Stiverne, but Wilder is more active with his jab. They trade jabs and Wilder is grazed with a hook. Three jabs and two rights and then a right and a jab to the body all by Wilder. Triple-jab by Wilder. Jab and a right and a show-boating studder-step by Wilder prior to the bell. Wilder, 10-9; Wilder, 88-83.

Round 10 Cornerman Mark Breland telling Wilder not to talk but to punch when Stiverne does. Wilder still landing effectively with the jab and the right hand. Very good discipline. Jab, right, jab right by Wilder. Farhood has it for Wilder, 88-83. Crowd starting to boo. Lead right and left and then another right all on the head of Stiverne, who takes them. Hard right by Wilder. Wilder eludes a hook on the ropes and takes three body shots. Hard left hook by Wilder. Wilder leans in on Stiverne on the ropes and lands jabs and rights. Stiverne trying to set a trap against Wilder’s lowly-held guard.Wilder backs off and eludes a right. Wilder covering up effectively and blocks shots by Stiverne. Wilder mixing it up inside and takes an uppercut. Wilder, 10-9; Wilder, 98-92.

Round 11 Wilder’s three jabs are the first punches to land early. Farhood has it for Wilder, 98-92. Wilder again chases Stiverne to the ropes with the jab and the right before backing off. Right cross from Stiverne, who also goes to the body. Wilder escapes and goes back to the jab and movement. Wilder’s pace slows as he absorbs a right and a left to the body. Another right to the body and a left to the head by Stiverne. Wilder still retreating. Right by Wilder. Wilder jabs and lands a right but not throwing with authority and is being safe. Wilder backs up Stiverne and lands a right at the bell. Stiverne, 10-9; Wilder, 107-102.

Round 12 Wilder told to be smart and “you’re the new champion.” Wilder jabs to start and retreats, Stiverne bobbing and weaving and trying to find a spot to land. Farhood has it for Wilder, 108-101. Stiverne landing heavily but Wilder covering up well on the ropes. Left hook to the body by Stiverne and a right to the body by Stiverne. Wilder avoiding punishment on the ropes and alternately lands shots of his own moving forward. Wilder smothering Stiverne on the ropes, landing occasionally and trying to kill the clock. Stiverne trying to create space, unsuccessfully. Wilder believes he has won as he fires a jab. Wilder, 10-9; Wilder, 117-111.