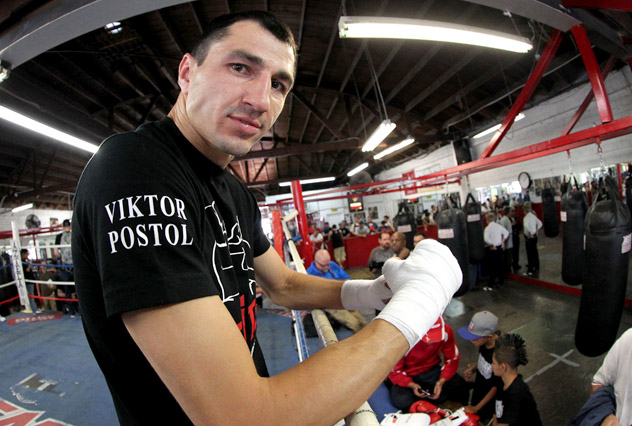 16
Jan
by Lem Satterfield
Unbeaten Ukrainian Viktor Postol, THE RING’s No. 8-rated junior welterweight, hopes to face the winner of a 143-pound catchweight bout scheduled for April 11 between RING 140-pound champion Danny Garcia and No. 2-ranked IBF titleholder Lamont Peterson, according to his manager, Vadim Kornilov.
Although Postol (26-0, 11 knockouts), 31, is the WBC’s No. 1-rated contender to face Garcia (29-0, 17 KOs), also the holder of the WBA belt, he accepted a step-aside deal in October, allowing each of the boxers to take one fight within the ensuing four months.

“The mandatory will go back into effect in February of 2015 after the two fights occur,” said Kornilov, during an October interview with RingTV.com, adding that there was “definitely a bonus involved” financially for “Postol’s side. This deal was financially beneficial to both parties, so that’s why we actually agreed to it.”

Postol hopes to make an appearance in support of Garcia-Peterson, which was announced during a Wednesday press conference as part of NBC’s new boxing series titled, “Premier Boxing Champions” (“PBC on NBC”) in accordance with a multi-year deal between the network and adviser Al Haymon.

“We are in negotiations right now,” said Kornilov of Postol, who has been co-promoted by Elite Boxing out of Ukraine and Top Rank Promotions. “Under the initial agreement, Postol is supposed to fight on the undercard of the April 11 bout.”

Postol is coming off an 11th-round knockout of Turkey’s Selcuk Aydin in May, representing the WBC’s eliminator bout for the right to face Garcia.

Garcia, 26, and Peterson (33-2-1, 17 KOs), 30, scored knockouts on the same card in their last fights in August at Barclays Center in Brooklyn. Garcia, of Philadelphia, scored a second-round stoppage of Rod Salka and Peterson, of Washington, D.C., beat Edgar Santana down en route to a 10th-round technical knockout.

Kornilov said he would like Postol to “fight the winner of the Garcia vs. Peterson fight next.”

“That is the agreement we had. I do not have any specific opponents yet,” said Kornilov, of an appearance on the Garcia-Peterson card. “But we will be looking for a good opponent that can give Postol a good fight since he has been out of the ring for a little bit and he needs to start preparing for his world title fight, which should finally occur this year.”