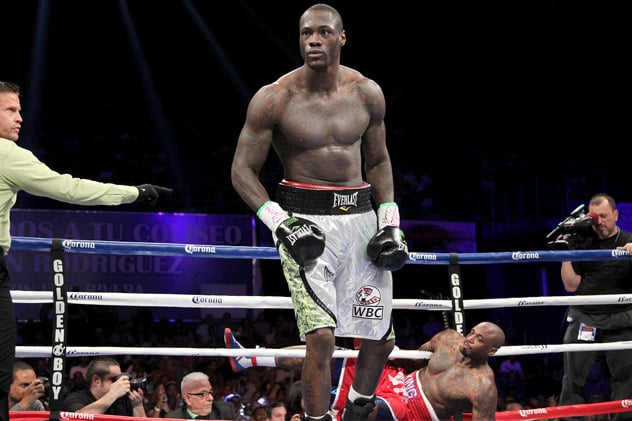 George Foreman said an “aggressive” and “smart” Deontay Wilder can defeat WBC heavyweight beltholder Bermane Stiverne “in three or four rounds” on Saturday at the MGM Grand in Las Vegas.

Stiverne (24-1-1, 21 knockouts) is the first heavyweight beltholder of Haitian descent and Wilder (32-0, 32 KOs) is attempting to become the first American titleholder since Shannon Briggs in 2007. The fight will be televised on Showtime.
Click here for the full episode of All-Access: Stiverne vs. Wilder.
“If he stays aggressive, Deontay Wilder wins but he’s got to fight downhill and stay aggressive against Bermane Stiverne. As long as Wilder remains aggressive, then I think I could have [Stiverne] out of there in three or four rounds,” said Foreman, a 66-year-old former heavyweight champion whose 10th-round knockout of Michael Moorer in November 1994 made him the oldest man to win a heavyweight championship at the age of 45.
“Sometimes, those big tall guys try to pick you apart and the next thing you know, they’ve got you hurt and then you’ve got a fight on your hands. Wilder cannot allow Stiverne to start picking him apart and turn it into a boxing match because he could lose that way. Wilder can use his jab to set up Stiverne but once you get that real estate, don’t give it up and let it go back and forth and all of that. Wilder should take it to him and be aggressive and be smart at the same time.”

Promoted by Don King Productions and Golden Boy Promotions, the card will also include the debut of Golden Boy signee Cesar Qui├▒onez, a junior welterweight who is trained by former junior middleweight titlist Fernando Vargas out of his Feroz Fight Factory gym.