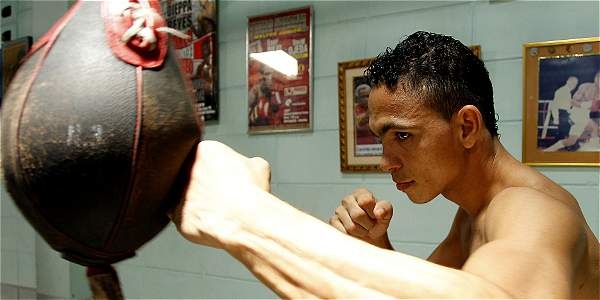 SANTA YNEZ, California – While he had accumulated 31 pro wins before his bout on Friday, Darleys Perez lacked a signature win. That might have changed as he scored his most impressive win to date, a one-sided 12-round unanimous decision over fellow lightweight fringe contender Jonathan Maicelo at the Chumash Casino Resort.

Perez has now won his last four bouts in a row since a decision loss to Yuriorkis Gamboa in June 2013.

Maicelo was coming off a 10-round split decision win over Art Hovhannisyan last July.

Undaunted, Maicelo was able to land a few left hands to the head of Perez. He was able to beat Perez to the punch on a few occasions, backing up Perez at times in the process.

Perez seemed to swing momentum in his favor in the fourth round. He continued to land consistently with right hands to the head, bruising up the left side of Maicelo’s face in the process.

“I was prepared for a tough fight,” said Perez after the fight. “Maicelo is an incredible competitor. It took me a few rounds to settle into a rhythm, but once I did, I was able to land whatever I wanted.”

With each passing round, Perez was able to increase his punch output, landing more at will on Maicelo. Perez began to mix in more left hooks to the head, puzzling Maicelo as it seemed as though he did not know what to expect from Perez.

“I want to be the best in the lightweight division. That’s what drives me. I put my heart and soul into every fight and I’m going to keep preparing the same way.”

Santana entered the bout having won his last nine bouts in a row. Mena was fighting on a week’s notice after Randall Bailey withdrew from the fight against Santana.

From the opening bell, Santana went on the attack, looking to set up a left hook or right cross. He hit pay dirt almost midway through the first round, when a left hook to the head dropped Mena to the canvas. Mena got up on wobbly legs and did not look like he had fully recovered from the knockdown. Moments later, Santana unleashed a left hook that dropped Mena flat on to his back. Referee Jack Reiss immediately waved the fight over at 1:43.

Miller used his height and reach advantage to keep Kinch mostly from the outside. Miller made Kinch pay for trying to get on the inside, landing hard hooks and crosses. It looked as though Miller would end matter early in the first two rounds as he hurt Kinch on a number of occasions.

Kinch had his best round in the third, connecting more to Miller’s head. But Miller swung momentum back in his favor, landing repeatedly with rights and lefts to the head and body of Kinch.

– Junior featherweight Roman Morales (19-0, 10 KOs) knocked out Ernesto Guerrero in the third round. A left hook to the body dropped Guerrero (17-15, 11 KOs) to one knee, where referee Jack Reiss counted him out at 1:05.

– Flyweight Poula Estrada (2-0) won a four-round majority decision over Kayana Rain, who was making her professional debut. One judge scored the bout 38-38, while the other two judges scored the bout 39-37 for Estrada.