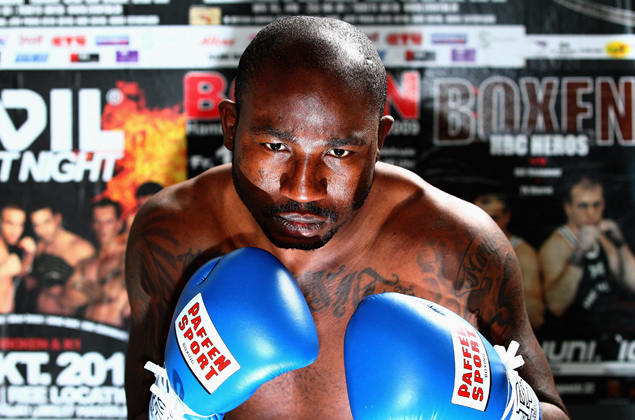 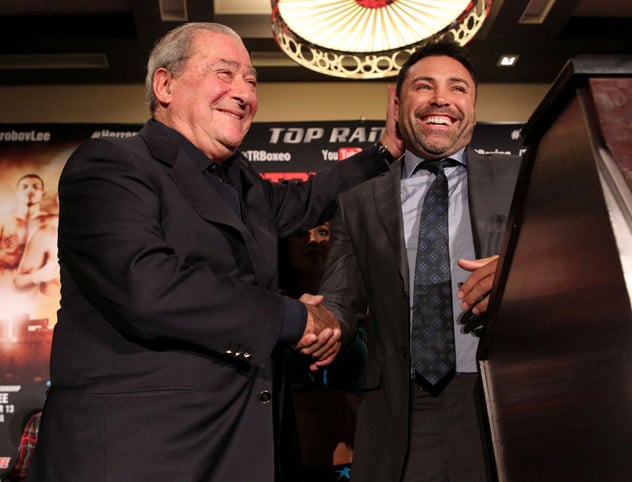 Golden Boy Promotions President Oscar De La Hoya, who was named 2014’s Promoter of the Year by Sports Illustrated, is looking to pick up where he left off in 2015.

“The year 2014 was an important year for Golden Boy Promotions and I’ve got to say that this may have been my most enjoyable year yet,” said De La Hoya, 41. “We had great fights, great performances and, most importantly, we opened the door to working with all promoters in boxing to put on the best fights possible for the fans of this sport.”

Among the highlights in 2014 were De La Hoya’s “reconciliation” with longtime rival Top Rank Promotions CEO Bob Arum and the HBO network as well as De La Hoya’s induction into the International Hall of Fame’s class of 2014 in June.

In August, De La Hoya facilitated the return to HBO to have Bernard Hopkins to defend his IBF and WBA titles against WBO beltholder Sergey Kovalev, who unanimously decisioned Hopkins in November.

Kovalev-Hopkins was secured following a negotiation between Golden Boy matchmaker Eric Gomez and Kovalev’s promoter, Kathy Duva of Main Events. This led to Duva dropping a lawsuit filed in April against adviser Al Haymon, promoter Yvon Michel, Showtime and Golden Boy charging those parties with interfering with a tentative fight between Kovalev and Adonis Stevenson, the latter of whom is aligned with Showtime.

By late September, De La Hoya also had cemented a long-term deal between HBO and RING No. 1-rated junior middleweight, former 154-pound titleholder Canelo Alvarez, who had fought on Showtime since September 2012.

The following are some of the upcoming events that will kick off 2015 for Golden Boy.

Bermane Stiverne (24-1-1, 21 knockouts) will defend his WBC heavyweight title against knockout artist Deontay Wilder (32-0, 32 KOs) on Jan. 17 at the MGM Grand in Las Vegas on Showtime.

On Jan. 15, Bernard Hopkins will celebrate his 50th birthday, this, a little more than two months after having participated in his most recent fight.

Five days after reaching the half-century mark, Hopkins is expected to be ringside as a promoter for a show that will take place at the 2300 Arena in his native Philadelphia.

Also on the card will be junior welterweight Michael Perez, of Newark, New Jersey, against Miguel Acosta and 130-pounder Lamont Roach Jr., of Washington, D.C., opposite an opponent to be named.

Featherweights Rocky Juarez (30-10-1, 21 KOs) of Houston and Robinson Castellanos (20-10, 13 KOs) of Mexico will meet on Jan. 26 on a Golden Boy Live! card on FOX Sports 1 and FOX Deportes in San Antonio, Texas. Juarez-Castellanos is an eliminator for the right to face RING No. 1-rated WBC titleholder Jhonny Gonzalez.

An Olympic silver medalist in 2000 and a former title challenger, Juarez, 34, ended a nearly two-year ring absence with a unanimous decision over Rene Alvarado in May.

Castellanos, 32, scored a shocking fifth-round knockout over previously unbeaten Ronny Rios in October. Prior to Rios, Castellanos had suffered a ninth round stoppage loss to Alvarado in April that ended his run of 11 consecutive wins, seven by way of knockout.

After winning the IBF’s vacant bantamweight title over Stuart Hall in October in Monte Carlo, Randy Caballero (22-0, 13 KOs) will make his first defense against two-time title challenger Alberto Guevara (18-2, 6 KOs) in front of a hometown crowd.

Caballero is 12-0 with five knockouts at Fantasy Springs, his last appearance there being a seventh round stoppage of Miguel Robles in July 2013.

Guevara is 2-2 over the course of his past four fights and was last in the ring for a ninth-round stoppage loss to undefeated RING No. 1-rated WBC tltleholder Shinsuke Yamanaka in November 2013. Guevara’s other loss was by unanimous decision to Santa Cruz at 118 pounds in December 2012.