Yvon Michel: ‘Adonis Stevenson is a class above everybody’ 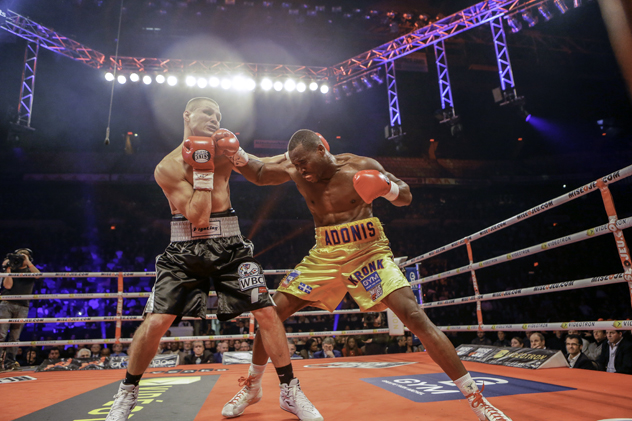 RING/WBC light heavyweight champion Adonis Stevenson demonstrated that he “is a class above everybody” with Friday’s fifth-round stoppage of Dmitry Sukhotsky, his promoter, Yvon Michel told RingTV.com on Tuesday.

Michel was responding to and defending against ongoing criticism of Stevenson (25-1, 21 knockouts), most notably that from former RING/WBC champion Jean Pascal, who, like Stevenson, is a Haitian-born resident of Canada.

THE RING’s No. 3-rated 175-pounder, Pascal has been calling Stevenson “Aducknis Chickenson,” declaring that the southpaw’s five-knockdown performance against Sukhotsky was a “mismatch on paper and in the ring.”

“Every time Adonis fights someone, people do not want to give him credit for winning,” said Michel of Stevenson, who has scored 11 knockouts over the course of 12 straight victories. “After Adonis knocks them out, they’re not supposed to be any good.”

Sukhotsky’s credentials had included a second-round stoppage in October 2011 over Nadjib Mohammedi, now the mandatory challenger to the IBF belt worn by Sergey Kovalev. Set for an HBO-televised March 14 defense against Pascal, Kovalev is also the holder of the WBA and WBO titles.

In addition, Sukhotsky had won four consecutive bouts, including three by stoppage, entering his fight with Stevenson.

“When he fought Braehmer, he almost knocked out Braehmer when they fought each other. But Adonis showed that he’s a pure puncher and that with one single punch, he can knock out anybody. So it’s not just that Sukhotsky is not in Adonis Stevenson’s category but it is more that Adonis Stevenson is a class above everybody.”

Although Pascal passed up a mandatory shot at Stevenson’s WBC title to face Kovalev, Stevenson has been mandated by the WBC to face the winner of Kovalev-Pascal.

Nicknamed “Superman,” Stevenson had been projected to face Pascal on April 4 at the Bell Centre in Montreal, which Michel placed on hold for their potential showdown.

A potential replacement for Pascal on that date could be Andrzej Fonfara. Fonfara lost a unanimous decision in May to Stevenson, who rose from a ninth round knockdown after having floored Fonfara once each in the first and fifth.

Fonfara rebounded from the loss to Stevenson with last month’s unanimous decision over Doudou Ngumbu and, like Stevenson, is advised by Al Haymon.