Jesus Cuellar stops Ruben Tamayo in Round 5 with body attack 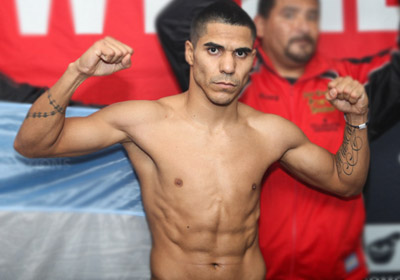 The featherweight division is home to respected veterans such as Jhonny Gonzalez, Abner Mares and Nonito Donaire, and marvelous young talents like Nicholas Walters and Vasyl Lomachenko. But there’s room for more players in the 126-pound weight class and Jesus Cuellar proved that he’s worthy of being in the mix with a successful 2014 campaign.

Cuellar (26-1, 20 knockouts), a 27-year-old southpaw pressure fighter from Argentina, systematically broke down Ruben Tamayo en route to a fifth-round stoppage on Saturday at the Little Creek Casino in Shelton, Washington. The fight was televised on Showtime Extreme in the U.S.

Cuellar, a Buenos Aires native who trains in Oxnard, California with Roberto Garcia, relentlessly pressed the capable fringe contender from Sonora, Mexico, jabbing his way in and firing hard punches to the head and body whenever he was close enough to do so.

Cuellar, THE RING’s No. 9-rated featherweight, dropped Tamayo (25-5-4, 17 KOs) with a left to the body with a minute left in Round 4. He dropped his fellow southpaw again (with another left to the body) with 20 seconds left in the round. Cuellar finished Tamayo off at 1:48 of Round 5, with — what else? — body shots.

The stoppage capped a banner year for Cuellar, who outpointed former 122-pound beltholder Rico Ramos in May and brutally knocked out former two-division titleholder Juan Manuel Lopez in September.

Ramos was always overrated, Lopez was shot and Tamayo is unrated, however, Cuellar’s pressure, heavy hands, solid technique, body attack and relentless nature are undeniable. He would present a challenge for all of the featherweight division’s standouts and probably make for some very exciting fights against punchers and aggressive fighters, such as Gonzalez, Walters and Mares.