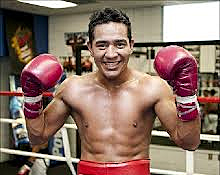 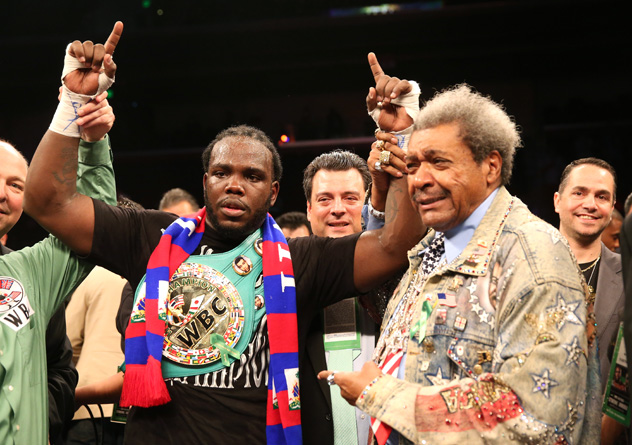 Long before Bermane Stiverne’s sixth round technical knockout of Chris Arreola secured the vacant WBC belt, making him the first heavyweight titleholder of Haitian descent in May, he had drawn inspiration and support from his compatriots.

Sitting at ringside at the University of Southern California’s Galen Center was two-time welterweight titleholder Andre Berto, whose disaster relief efforts have supported victims of the earthquake that ravaged Haiti four years ago.

Stiverne also heard from countrymen like former RING light heavyweight champion Jean Pascal as well as reigning RING/WBC 175-pound champion Adonis Stevenson, the latter prior to his own unanimous decision over Andrez Fonfara in May.

“Of course I heard from them. Actually, Berto was there that night and Adonis couldn’t make it because he was getting ready for his next fight, which was two weeks after I fought. But I did get a lot of calls from a lot of people and that was well appreciated. There were things like, ‘Congratulations,’ and things like that,” said Stiverne.

“Everybody that called me that night were always behind me. It wasn’t like I had never heard from them and they just decided to call me. They’ve been calling me up after every fight. I did get some calls from people that I didn’t expect. It was all love. It’s not really important who called but I appreciated that.”

One of those calls was very important, however, considering it came from Haitian President Michel Martelly, said Stiverne.

“I did hear from the president. Actually, he called me as soon as I was walking out of the room from the fight. He called me, so I spoke to him for maybe a few seconds,” said Stiverne.

“I got a call from him right after the fight and we chit-chatted a little bit. It was nothing but, ‘Congratulations,’ and how proud he was and that he was happy and that everybody is behind me. It was love and support.”

“It means a whole lot to represent the country where I was born. To have the whole country behind me means a lot, especially with the kids. I did get a lot of videos from a lot of cities and places in the country, with people saying my name and things like that. It’s nothing but motivation,” said Stiverne.

“Especially when I see kids. It’s not a rich country. There’s a lot of things that have happened over there that are not pleasant. But they keep a smile on their faces. It’s just motivation to be a role model for the kids and the people out there. To be the one who inspires them to not give up or to keep the faith.”

Wilder, 29, is coming off a fourth-round knockout of Jason Gavern, whom he dropped in the third and final rounds in August. Prior to Gavern, Wilder became Stiverne’s mandatory challenger with a 96-second knockout of Malik Scott in a WBC eliminator bout in March.

“We believe [Wilder] is a choreographed career, very well done. Good job but I believe Wilder will quickly realize that fighting at this level is a whole different universe,” said Camille Estephan, Stiverne’s manager.

“But by then, it will be too late for him. Bermane will make a statement. Don’t blink, guys. I really hope all the fans on this planet get to realize who the new Mike Tyson is.”