Abner Mares pounds his way to victory over Jose Ramirez 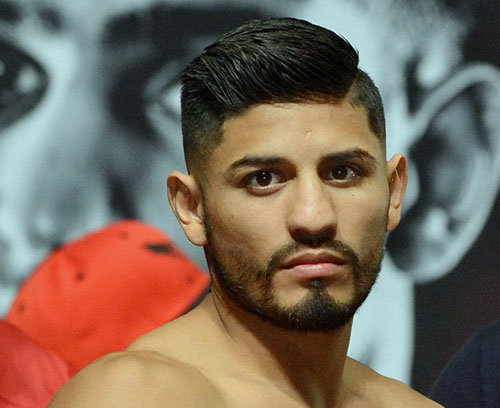 LAS VEGAS ÔÇö Abner Mares admits it. The former three-division titleholder got a little too comfortable, and Jhonny Gonzalez made him pay 16 months ago.

Mares (28-1-1, 15 knockouts) still carries the sting of the first-round knockout loss last year. Afterward, friends and family turned their backs on him, he said. Mares even doubted himself a little.

But gradually he’s coming back, through time and victories like his fifth-round stoppage over a game but out-gunned Jose Ramirez (24-4-2, 15 KOs) in a scheduled 10-round featherweight bout on the Amir Khan-Devin Alexander card at the MGM Grand on Saturday night.

“I needed this,” Mares said. “You’re going to be up and down and learn that it’s life. After I lost to Gonzalez, I lost so many people who were with me. I lost so much family, so many friends. It opened my eyes. They believed Abner Mares was done. After I beat [Jonathan Oquendo] in July, there were people saying that I wasn’t the same, that I was done. This proves that I am back. It’s why I needed this, I’m not done.

“I think I learned that I lost hunger after I became a three-time world champion. I got fat and I got comfortable. I thought by doing the same things, I would get the same results. I found you have to keep hungry and work harder. I’m hungry. I’m back. In boxing, it’s about wanting things bad and I lost sight of that.”

Mares didn’t let Ramirez out of his sights. He knocked down his fellow Mexican three times, in the first, third and fifth rounds. Ramirez showed resolve by getting to his feet each time but didn’t give back enough to stay in the fight.

Mares admitted that he made things a little tougher than they had to be by engaging Ramirez in some furious exchanges.

“I really wasn’t thinking much about Ramirez,” Mares said. “He was tough opponent but I made it tougher. I made it selfish in the sense that I just wanted to have fun in there. I felt comfortable, loose and I was throwing combinations. He wanted to fight a war, I wanted to fight a war and the fans love that. In the last two rounds, I could tell I was hurting him and I wanted to end it.”

Charlo hurt Bottai with a left hook, prompting referee Jay Nady to wave it over 38 seconds into the round. Charlo now has a chance at 41-year-old IBF junior middleweight titlist Cornelius “K9” Bundrage, who defeated Carlos Molina back in October to win the belt.

“I want the IBF title, I want K9, but I had to stop [Bottai] first,” Charlo said. “I threw the hook and he ate it. The title shot is a long time coming for me. I’m here now.”