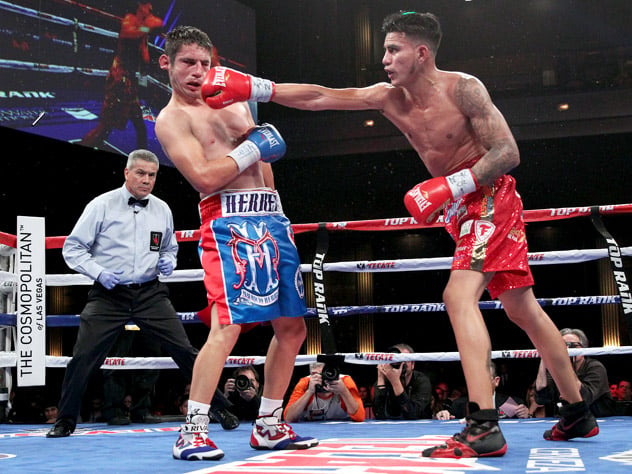 Mauricio Herrera just cannot seem to catch a break. After losing what many thought was clearly his fight against Danny Garcia, Herrera once again was given the shaft from the judges as Jose Benavidez won a unanimous decision with scores of 116-112, 116-112 and 117-111 on the Tim Bradley-Diego Chaves undercard in Las Vegas.

How the judges came to this decision was anyone’s guess, as Herrera was the aggressor throughout the junior welterweight contest and bulled Benavidez into the ropes, often while landing shots to the head and body. Benavidez spent a lot of time with his back on the ropes and fought in spurts. But when he did open up, Benavidez landed very clean power shots that must have swayed the judges.

In the early rounds, Benavidez (22-0, 15 knockouts) showed far too much respect to the rugged Herrera. “El Maestro” kept the taller and rangier Benavidez on his heels with a stiff jab and landed impressive body shots that appeared to give him the early rounds. Benavidez finally decided that languishing against the ropes wouldn’t be in his best interests and threw crisp combinations in the fourth and fifth rounds. But Herrera (21-5, 7 KOs) stuck with the game plan and continued to outwork and outhustle Benavidez. After a ninth round that saw Herrera do some of his best work, Benavidez landed some solid combinations over the course of the final three rounds, including some excellent action in the final minute as both fighters held their hands up in victory.

But in the end, the fight would be yet another that Herrera would have a valid argument that he won.

“Herrera was very aggressive but I caught him with everything when he came in,” Benavidez said afterward. “I knew I won this fight.”

Unfortunately, others in the arena didn’t feel the same way and chants of “Bulls–t” emanated from the disgruntled audience.

Denis Shafikov fended off an ultra-aggressive Miguel Mendoza to earn a unanimous decision in eight-round lightweight action. Mendoza (21-5-2, 21 KOs) lurched forward throughout the fight and launched wild punches in the direction of Shafikov, but the Russian remained composed and picked off his advances with relative ease. Shafikov (35-1-1, 18 KOs) was simply too sharp for his adversary and earned the decision with all three judges seeing it in his favor, 79-73. With the victory, Shafikov is now the No. 1 challenger to Mickey Bey’s 135-pound IBF title and will look to have that fight in January.

2012 Olympian Jose Ramirez applied just enough pressure to break down Anthony Arellano in the final 10 seconds of their six-round junior welterweight affair. The 22-year-old slowly ramped up the aggression round by round as he utilized a stiff jab and some efficient work to the body before seeking the finish in the final rounds. But despite being ahead on the scorecards, Ramirez still pursued a knockout. Arellano (7-3-1, 3 KOs) proved to be game but ended up eating some wicked leather from Ramirez (13-0, 10 KOs), punctuated by a thudding left hook that caused referee Pat Russell to call a halt to the bout at the 2:50 mark. “It was a great fight for me because I was able to use my patience, get some hard rounds in and stop him with a left hook to the temple,” said Ramirez afterward.

Mikael Zewski (26-0, 20 KOs) remained undefeated with a majority decision against Jeremy Bryan (17-5, 7 KOs). Bryan, who was coming off of a split-decision loss to Sadam Ali in August, gave Zewski all he could handle for ten rounds as he effectively boxed and countered with just enough movement to keep the Canadian off balance. One judge appreciated Bryan’s efforts and saw it even at 95-95. However, Zewski’s aggression and cleaner punches made all the difference as two 97-93 scores gave him the decision.

“He did a lot of running,” Zewski said afterward. “I tried to make a pleasing fight but it wasn’t. I’m glad to get the win though.”

Sean Monaghan ran his record to a perfect 23-0 by recording his 15th professional knockout in the third round against Daniel Regi in a scheduled ten-round light heavyweight bout. Regi (20-12, 12 KOs) provided little resistance as Monaghan abused him throughout the fight and sent Regi to the canvas three times in the third round before his corner stopped the fight at the 2:52 mark. The unbeaten Irishman is ready for a step up in competition and wasted no time calling out his next opponent.

“On Monday I’m calling my manager to get a shot at Julio Cesar Chavez Jr,” Monaghan said. “He’ll get the same kind of punishment that this guy got.”

In the first fight of the night, two-time Lithuanian Olympian Egidijus Kavaliauskas (9-0, 9 KOs) scored a second round knockout over Jaime Herrera (12-3, 7 KOs) in welterweight action. After securing two knockdowns, Kavaliauskas put Herrera down for good with a combination that caused referee Pat Russell to stop the fight at the :46 mark of Round 2.