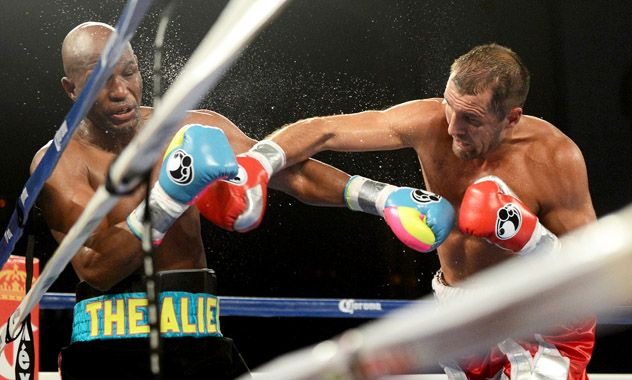 Light heavyweight titleholder Sergey Kovalev was granted an exception from the IBF on Friday that allows him to face Jean Pascal in a March 14 bout rather than mandatory challenger Nadjib Mohammedi, IBF Championships Chairman Lindsey Tucker informed RingTV.com on Saturday.

Kovalev (26-0-1, 23 knockouts), who also holds the WBA and WBO titles, is coming off last month’s unanimous decision over Bernard Hopkins while Pascal (29-2-1, 17 KOs) was briefly in the ring on Dec. 6 against Roberto Bolonti, resulting in a no-contest.

Tucker said the request from Main Events’ attorney, Pat English, arrived at the IBF’s offices on Monday to organization president Daryl Peoples, who will make a ruling.

“Yes, it was granted,” said English. “Details on the fight will come from others.”

“Yes, the IBF has granted the exception,” said Main Events’ CEO Kathy Duva, who handles Kovalev, adding that she and Pascal’s promoter, Jean Bedard of InterBox, have been in negotiations for the fight.

“The fight will be in Canada, but we have not yet finalized the venue — either Montreal or Quebec City. Jean Bedard and I are now working on plans to make a formal announcement soon. Sergey is very grateful to the IBF, and we are both looking forward to what will undoubtedly be a great promotion.”

Pascal, 32, still is the mandatory challenger to face current RING and WBC champion Adonis Stevenson (24-1, 20 KOs), who is scheduled for a Dec. 19 date with Russian Dmitry Sukhotsky in Quebec City.

The Bell Centre in Montreal had been placed on hold on for a potential April 4 showdown with Pascal, according to Stevenson’s promoter, Yvon Michel.

“It’s our opinion that we’re going in the direction of fighting the best available fighter. Sergey doesn’t want to fight just anybody, he wants to fight the best, and right now, we believe that is Pascalj . If Sergey was going to fight for the IBF mandatory against Mohammedi, then that opportunity to fight Pascal would be gone. We asked the IBF if it were possible to go fight Pascal if we were to promise that we’re going to come back to fight Mohammedi,” said Kovalev’s manager, Egis Klimas.