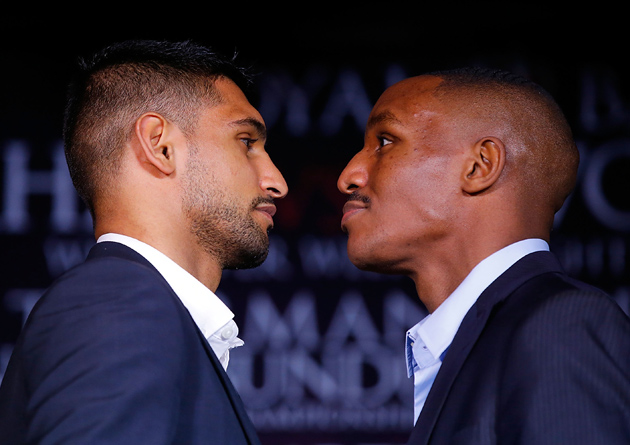 RingTV.com has a live round-by-round update of Saturday’s welterweight clash during which Amir Khan dominated a clash of former titleholders by unanimous decision over southpaw Devon Alexander at the MGM Grand in Las Vegas.

A two-division title winner, Alexander (26-3, 14 knockouts) had been dethroned as IBF 147-pound beltholder nearly a year ago this week following a unanimous decision loss to Shawn Porter on Dec. 7 but the 27-year-old rebounded with a unanimous decision over Jesus Soto Karass in his last fight in June.

The 28-year-old Khan (30-3, 19 KOs) was coming off a one-sided unanimous decision victory over former titleholder Luis Collazo, a southpaw who was floored three times during Khan’s 147-pound debut in May.

Their focus on each other notwithstanding, Khan and Alexander realize a fight against Floyd Mayweather Jr. could be in the future for Saturday’s winner.

The Showtime broadcast begins at 9 p.m.

Round 1: Fighters in the center of the ring, Khan and the southpaw Alexander. Both jabbing early. Nothing material until Khan lands an overhand right over the jab. Khan lands another right after his own jab. Long left by Alexander, who takes a head-swiveling right hand after the jab. Two right hands for Khan during the clinch. Nice jab by Alexander. Jab to tghe body for Khan. Speed edge giving Khan the advantage early. Another body jab by Khan. Right and left by Khan and a straight left to the body. Right hook clips Khan. Left hook by Khan just prior to the bell. Khan, 10-9.

Round 3: Hunter is happy with Khan, telling him Alexander is frustrated. Cunningham says Alexander has Khan where he wants him. Khan lands an early broad-side hook. Alexander needs to step up the pressure. Left by Alexander grazes. Right lands by Alexander. Khan misses a counter left hook. Jab by Alexander and one by Khan. Jab to the body for Alexander, who needs to close distance. close round. Grazing right by Khan and a right by Khan that counters the jab. Fighters warned to watch their heads. They trade lefts. Right by Khan and a clinch. Another right and two jabs from Khan. Speed again killing Alexander. Right to the body by Khan. Khan, 10-9; Khan, 30-27.

Round 11: Khan lands an erly hook during an exchange and later, double-jabs. Khan still being beaten to the punch. Farhood has it for Khan, 99-91. Two more Khan jabs. Jab and left by Alexander, who takes a right. Double-jab by Khan. Khan is so at ease and confident. Hook to the body and head by Khan with movement. Khan staying just out of reach, lands a hook. Alexander simply going through the motions. Hook by Khan down the middle. Left by Alexander, right and left by Khan, right hook by Alexander. Khan, 10-9; Khan, 109-100.

Round 12: Khan lands an early left hook and a head-swiveling right. Another left hook, jab and right by Khan. Farhood has it for Khan, 109-100. Left by Alexander, who takes a hook. Khan dominating. Double-jab by Khan. They trade jabs. Left and right by Khan and the sequence is repeated. Complete dominance in every aspect by Khan. Hard left by Alexander. Khan raises hands skyward with confidence. Khan, 10-9; Khan, 119-109.