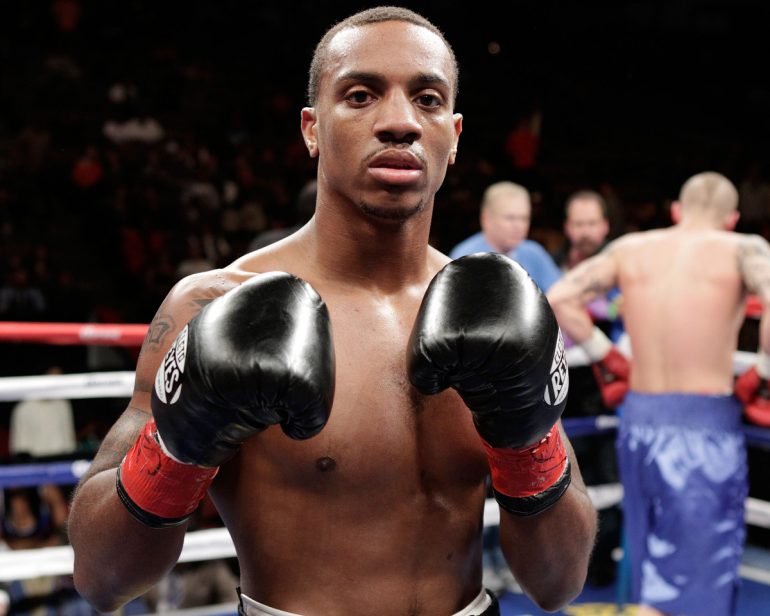 Best night of pro career: Pearson claims his best night to date was two fights ago when he needed less than a minute and a half of the opening round.

“I fought a guy (Acacio Joao Ferreira) who was 14-0 from Brazil,” Pearson told RingTV.com. “We fought on Shobox and I knocked him out in the first round.

“That was my favorite knockout, it was a vicious knockout. I had a great training camp and it paid off.”

Pearson also pointed out that the Fightfax record-keeping company lists his pro record at 14-0 with the additional three wins coming from the WSB (World Series of Boxing) against impressive opposition.

“I fought three Olympians, one (2008) gold medalist from Kazakhstan (Bakhyt Sarsekbayev) and one Olympic (2012) bronze medallist from Brazil (Yamaguichi Florentino) and I beat both of those guys,” he said. “Fighting an Olympic medalist in only my second and third fights, I think that really showed a lot of character and what I’m capable of doing to beat those guys at a young age and now I feel I’m sharper, more mature as a fighter and looking forward to being a world champion – that’s the ultimate goal.”

Worst night of pro career: Pearson has won all his bouts to date, however, last time out he eked out a split decision over tough journeyman Lanardo Tyner.

The young southpaw had to pick himself off the canvas in process. He was caught by a chopping right hand late in the sixth and then a volley of punches saw him touch down.

Tyner came into the contest on the back of six straight wins and has never been stopped, going the distance with the likes of Canelo Alvarez, Lamont Peterson and most recently Antonio DeMarco.

“I pulled out with my hands down. I controlled the fight but I felt there was so much more I could have done, maybe I gave him a little too much respect. I was able to go eight rounds with him, It was a good test, let me know where I’m at and where I plan to be.” 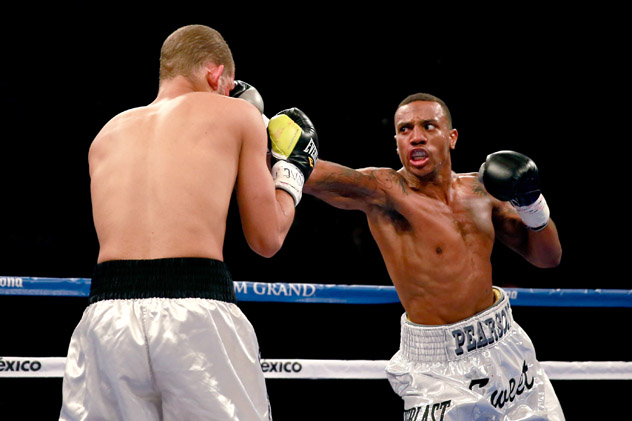 Next fight: Pearson had been due to fight on Aug. 30 against fellow prospect Steve Martinez (15-1) only for an ankle injury to postpone the fight. However, once he was fit his team requested that Martinez be the opponent. The two meet on Dec. 12 in San Antonio over 10 rounds live on Showtime.

Why he’s a prospect: Pearson was a highly respected amateur who won seven national titles, including the U.S. nationals in 2011 that put him at No. 1 in America. He also won the National PAL in 2009 and took bronze in the Golden Gloves, along with several Junior Olympic titles.

After his most recent fight against Tyner, Pearson went into camp with Miguel Cotto to help him get ready to fight Sergio Martinez and then worked with Canelo Alvarez to prepare for Erislandy Lara.

Both opportunities were gratefully received and have helped “Sweet Pea” improve.

“Since my last fight I’ve been in the ring with elite guys,” said Pearson. “That’s done tremendous things for my confidence because overall as a fighter I feel like I’m better.

“I feel like I’ve had 10 fights since my last fight but really it’s just the sparring with elite guys. They gave me the look I needed to see what it looks like at the elite level to see if I can cut it and I definitely can.”

His trainer, Al Mitchell, a veteran noted for being head coach of the 1996 U.S. Olympic team and taking David Reid and the late Vernon Forrest to world titles, believes the experience to be invaluable.

“He held his own, he didn’t get hurt and he worked real good with them,” said Mitchell. “That’s what’s good with camps like that. They don’t try to open up on you, they need the work so they work on different things but it gives them a chance to see how champions work and that’s a good thing.

“You can’t buy experience; that was unbelievable for him to get the chance to work with both of them. I can see the difference in his attitude.”

Pearson has yet to spar with Mayweather. The two were supposed to spar when Mayweather was preparing to face Robert Guerrero, but Pearson had Lasik eye surgery. The master has told the apprentice that they’ll get some work in before he retires.

“Down the line he will,” commented Mitchell. “Floyd likes him and wants to take care of him. When Floyd thinks he’s ready Floyd will work with him.”

After Pearson’s devastating knockout of Ferreira, Mayweather spoke highly of his charge, telling Steve Farhood on Shobox: “Chris Pearson is a young champion; he’s gonna be a world champion someday. We truly believe in him, me, Leonard Ellerbe and of course Al Haymon.” 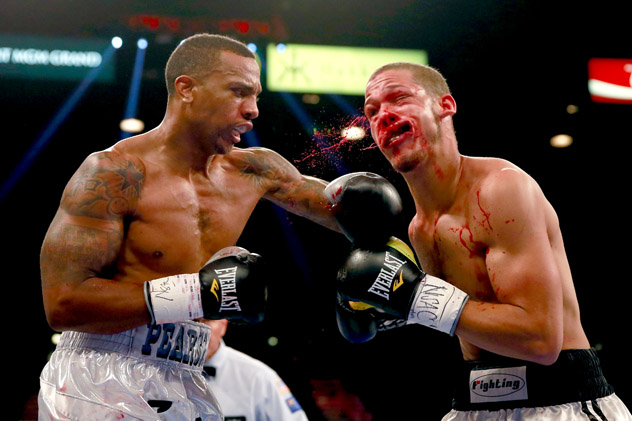 Why he’s a suspect: The most noticeable chink in Pearson’s armor at this stage would appear to be his chin. The Ohio native touched down once in his amateur career and has been on the canvas twice so far as a pro. You wonder how his chin will hold up as the level of opposition increases.

“The first fight, I fought a late substitute (Christian Nava), he came in about 10 pounds heavier but we took the fight because we’d been in camp,” he said. “I was ready to fight. Boxing is a fight, you can get hit, you can get knocked down. I got up and I stopped him in the fourth round.

“The last guy, Tyner, has stopped a lot of prospects. He caught me in the sixth round and hurt me and I took a knee and got up, boxed my way and won the decision.

Pearson points out that while he’s been down he has reacted positively to the adversity.

“Yes I’m human, yes I guess you could say I’m vulnerable like anybody is in the ring but I don’t go down and stay down. If I went down I’m getting up and ready to fight.”

Mitchell concurs with his fighter.

“The last time he was on the canvas he was in with a guy who had 40-something fights and fought Canelo,” said Mitchell. “So he’s getting experience and he didn’t lose his head. When he did get knocked down, he stopped, took the count, looked at the ref and got back up and worked.”

“Number one he wants to take on the world but winners and guys that end up being champs all think that way. My job as a coach is to take him through the right path,” stated Mitchell. “Number two is that he’s got to learn more discipline not do things the way he wants to. Stick to the game plan. Once he does that he’s gonna be awesome.”

Story lines: Pearson started boxing at seven years old, winning his first national at 10. As a young kid he enjoyed football and basketball. However, he strived to become a boxer taking the sport seriously when he was 16.

He grew up with the likes of Adrien Broner and Shawn Porter in the thriving Ohio amateur scene.

Pearson went to the Northern Michigan University for a year whilst continuing to develop in the amateurs. When he lost in the Olympic trials the youngster decided to quit college and made the move into the pro ranks.

Pearson is naturally right-handed but fights out of a southpaw stance. He has good size for a junior middleweight having fought up as high as 165 pounds as an amateur. His big attributes appear to be power in both hands along with speed.

He considers himself a boxer puncher as does Mitchell.

“He’s got power in both hands. He’s getting discipline and he’s young. He’s coming along. He has good power and speed.

“I definitely see him as a really talented boxer and he could be really good, it’s about discipline and getting better with each bout and keeping busy. If those things happen he has good potential to win a world title.”