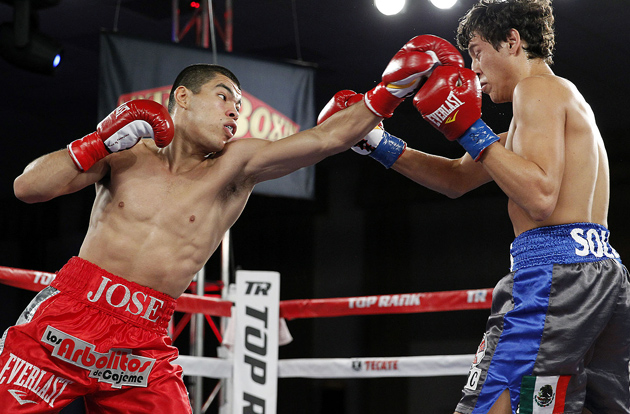 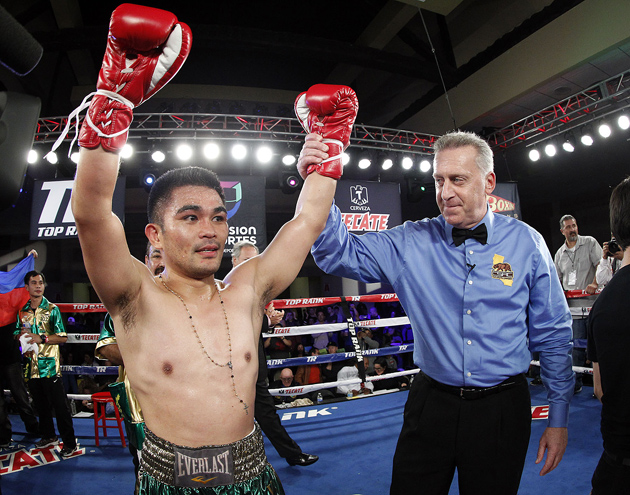 GLENDALE, California – Another fight, another win for Jose Felix.

At this pace, he could be fighting for another world title again.

Jose Felix stopped game opponent Luis Solis in the third round of a scheduled eight-round bout at the Civic Auditorium.

The bout headlined a “Solo Boxeo Tecate” broadcast that was promoted by Top Rank, in association with Bash Boxing and Art of Boxing Promotions.

Felix was unbeaten in his first 27 bouts before losing a 12 round unanimous decision to Bryan Vasquez in Las Vegas, Nev. on April 12. Felix bounced back from the loss to Vasquez by stopping Alejandro Rodriguez in the sixth round on Aug. 9.

Solis entered the bout against Felix having lost three bouts in a row.

Solis was game from the opening bell, aggressively taking the fight to Felix. He was rewarded by landing lefts and rights to the head of Felix.

Undaunted, Felix swung momentum in his favor at the beginning of the second round, dropping Solis with a left hook to the head. Solis was game after getting up, but Felix began to impose his will more with each passing moment.

Felix ended matters in the third round, dropping Solis again with a left hook to the head. Referee Dr. Lou Moret immediately waved the fight over at 41 seconds.

Flyweight contender Brian Viloria stayed busy while awaiting a possible world title fight, stopping Armando Vasquez in the fourth round of a 10-round special attraction bout.

Viloria attempted to work from the outside, while the shorter Vasquez pressed the action in an attempt to get on the inside of Viloria’s guard.

Sometime during the second round, an accidental clash of heads opened a cut over the left eye of Viloria. The cut was a non-factor as little blood came out.

Vasquez had his moments in the bout, landing right hands to the head of Viloria. As the third round progressed, Viloria began to time him, landing punches to the head and body.

In the fourth round, Viloria landed a well-placed left hook to the body of Vasquez, dropping him to a knee. Vasquez tried to get up, but remained on his knee as referee Jack Reiss counted him out at 1:37.

It was a step up in competition for Rodriguez as Solis came to fight. Solis was able to score early on against Rodriguez, landing an occasional lead or counter right hand to the head in the first couple of rounds.

Both fighters had their moments in the third round, but Rodriguez hurt Solis in the fourth round with a counter left hook to the head. Rodriguez tried to follow up with a barrage of punches, but Solis was able to avoid getting hit again.

After a competitive fifth round, Rodriguez hurt Solis with a double left hook to the head, eventually dropping him with a right to the head. Solis remained on a knee and tried to get up, but referee Jerry Cantu waved the fight over at 56 seconds of the sixth round.

– Welterweight Arnold Barboza (4-0) won a four round unanimous decision over Samuel Garcia (0-2). All three judges scored the bout 40-36 in favor of Barboza.

– In the opening bout of the card, middleweight Cem Kilic won a four round unanimous decision over Jose Mejia. All three judges scored the bout 40-36 in favor of Cilic.

– In an exciting bout, junior welterweight Gloferson Ortizo (2-0-1) won a four-round unanimous decision over Danny Ruiz (2-3). All three judges scored the bout 39-37 in favor of Ortiz.