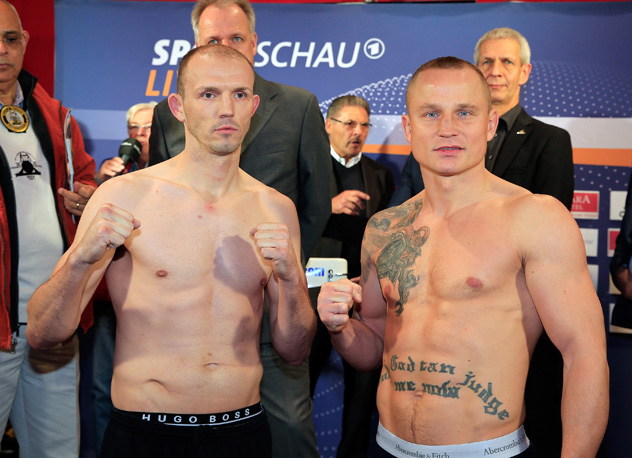 RING No. 4-rated light heavyweight Juergen Braehmer and rival Pawel Glazewski each weighed 173.3 in advance of Saturday’s bout at the EWE Arena in Oldenburg, Germany.

Braehmer (44-2, 32 knockouts), who turned 36 in October, will be after his 14th straight win against Glazewski (23-2, 5 KOs), and is coming off a unanimous decision over Roberto Bolonti, who will face Jean Pascal on Saturday in Montreal.

Glazewski, 32, won for the third straight time with a unanimous decision over Rowland Bryant in August, having suffered his last loss by seventh-round stoppage against Hadillah Mohoumadi in June 2013.

[Note: Braehmer is widely reported as owning the WBA title. His is the “World” title, whereas THE RING recognizes Sergey Kovalev’s “Super World” belt as the WBA’s legitimate crown.]

Zeuge, 22, has stopped his past four opponents, and is coming off a ninth-round technical knockout victory over Baker Barakat in August.

Bozic, 40, unanimously decisioned Miroslav Kvocka in August to come back from a fifth round stoppage loss to Fedor Chudinov in March.

Merroudj, 29, has won four consecutive fights since falling by majority decision to Dieudonne Belinga in April 2013, and was last in the ring for a decision over Stephane Benito in October.

Culcay, 29, also has won four consecutive fights and was last in action for a unanimous decision over Isaac Real in August. Culcay lost to Guido Pitto by split decision in April 2013.