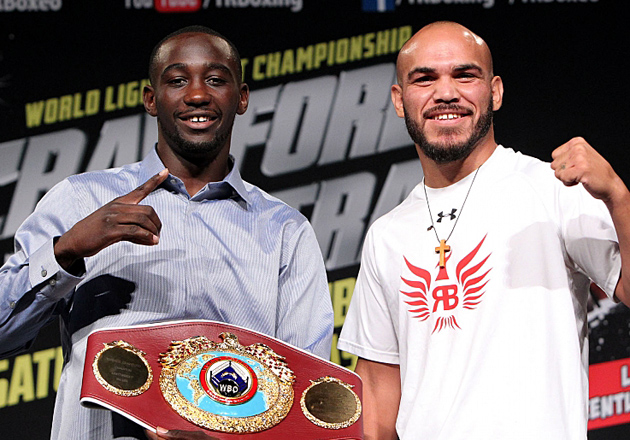 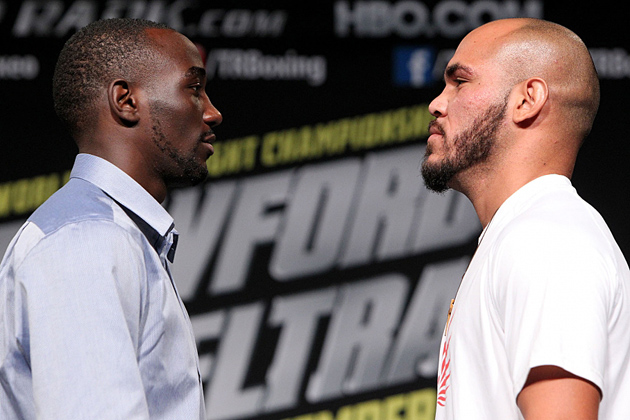 Terence Crawford (L) and Raymundo Beltran, THE RING’s Nos. 1 and 2-rated lightweights, engage in a staredown at the kick-off press conference for their Nov. 29 showdown in Omaha, Nebraska. Photo by Chris Farina-Top Rank

The vacant RING lightweight championship will be on the line on Saturday when WBO titleholder Terence Crawford takes on Raymundo Beltran in his hometown of Omaha, Nebraska.

Crawford is THE RING’s No. 1-rated lightweight; Beltran is the magazine’s No. 2 contender.

The month of November, especially this past weekend, has been a busy time for RING-rated contenders, which has resulted in significant changes in some of the divisional rankings, as well as the mythical pound-for-pound top 10 list.

Pound for pound: RING heavyweight champ Wladimir Klitschko and Manny Pacquiao both moved ahead of Andre Ward, who hasn’t fought in a year and hasn’t faced an elite opponent since stopping then-light heavyweight champ Chad Dawson in 10 rounds in September 2012.

Klitschko, who defended his many titles against top-rated contender Kubrat Puvlev by stopping the unbeaten Bulgarian in five rounds on Nov. 15, moved from No. 3 to No. 2, the spot that had been occupied by Ward, THE RING’s super middleweight champ. Pacquiao, who defended the WBO welterweight belt by outpointing Chris Algieri in one of the widest title bout decisions ever on Nov. 22, moved from No. 4 to No. 3.

Also, Roman Gonzalez (41-0, 35 knockouts), the three-division titleholder who defended his RING/WBC flyweight championship with an impressive sixth-round stoppage of Rocky Fuentes on Nov. 22, moved from No. 9 to No. 7, leap-frogging Carl Froch and Guillermo Rigondeaux.

Junior welterweight: Jessie Vargas (26-0, 9 KOs) won a decision over unrated Antonio DeMarco, a former lightweight titleholder. Vargas will move up one spot to No. 7 and trade places with Zab Judah, who will drop one spot to No. 8.

Featherweight: Vasyl Lomanchenko (3-1, 1 KO) scored a knockdown en route to a shutout decision over once-beaten Chonlatam Piriyapinyo. Lomanchenko will move up one spot from No. 5 to No. 4, trading places with Evgeny Gradovich.

Junior featherweight: No. 3-rated Scott Quigg (30-0-2, 22 KOs) scored a unanimous decision over tough Hidenori Otake on Nov. 22. Cristian Mijares has been rated at No. 5 but his last two fights have been at featherweight where he recently earned a fringe title. Mijares will be dropped from the 122-pound ratings. Each fighter below him will move one spot. OPBF champ Shingo Wake (17-4-2, 10 KOs) will enter at No. 10.

Bantamweight: No. 9-rated Jamie McDonnell (25-0-1, 12 KOs) scored a 10th-round stoppage over unrated Javier Chacon due to a shoulder injury suffered by Chacon. No change.