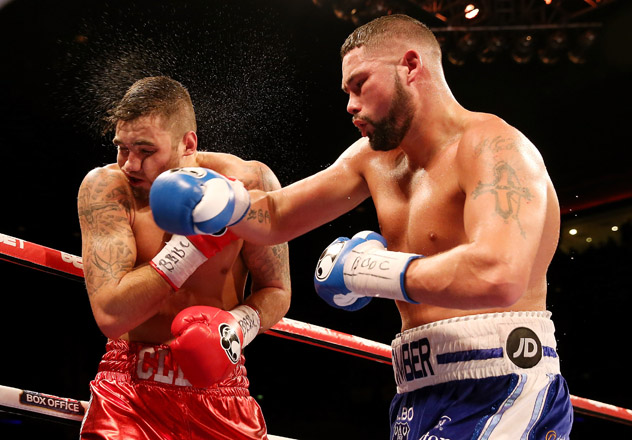 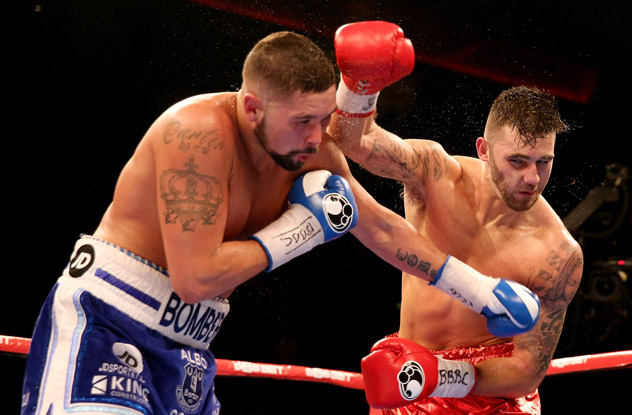 Tony Bellew (L) catches a right hand while taking it to Nathan Cleverly during their heated rematch in Liverpool, England, on Nov. 22, 2104. Bellew won a split decision. Photo by Scott Heavey / Getty Images

Liverpool’s Tony Bellew gained sweet revenge over Nathan Cleverly this evening in his hometown and, in doing so, seemingly pressed play on a third meeting at some point in 2015. Yet it’s hard to imagine a rubber-match will generate any of the same clamour or anticipation following the twelve rounds the pair shared at cruiserweight. It was a strange one, to say the least.

It all started normally enough. Bellew, the self-proclaimed ‘Bomber’, showed admirable restraint in getting behind his jab early and then supplementing that shot with crosses to the head and hooks to Cleverly’s body. Cleverly, meanwhile, appeared content to match Bellew at range, flicking out his own jab – quicker and snappier, shot from his shoulder – but wasn’t all that keen to follow it up with much else. Curiously, right hands were few and far between.

This was the punch of choice for Bellew, however, and he loaded up on plenty of them in the first half of the contest, keen to make good on his promise of a knockout. He unquestionably appeared the heavier-handed of the two, though that was perhaps never in doubt.

Still, nervous energy began to subside by round four and Cleverly, in particular, started to get loose. His shoulders dropped and so too did his hands. At one point he backed into a corner, made Bellew miss an attack, and then spun out and wound up his right hand as if about to finally unleash that elusive punch. Alas, it never came. He performed the same fancy move again moments later. Same end result.

Whether broken or simply all part of some great masterplan, nobody could be quite sure, but Cleverly’s right hand – admittedly, never a pet punch of his – was conspicuous by its absence for much of the fight. This oversight, nay, handicap allowed Bellew to impose his will on the lighter puncher and pocket rounds on sheer aggression alone. And even though Cleverly would sometimes get the better of these exchanges in close, with his back to the ropes and only his left hand in operation, Bellew frequently gave the impression of being in control, the one on the front foot.

That said, fatigue sapped the snap from Bellew’s work through the middle rounds. It also caused Cleverly’s legs to slow. In fact, by round nine, Cleverly would retreat to the ropes at free will and Bellew would duly follow. From there, Bellew would huff and puff and throw with all his might, all the while watching the occasional Cleverly left hook come back the other way.

This pattern continued in rounds ten, eleven and twelve, and the question now, it seemed, wasn’t so much ‘who would win?’ more ‘can Bellew stop Cleverly?’ The Liverpool crowd believed so. They made their voices heard as Bellew closed in on what appeared certain victory.

Appeared is the operative word, though, for when the bell finally rang, at gone midnight, the ringside judges somehow conjured and then delivered a split-decision verdict. Cue bemused faces all round. Fear not. Bellew was awarded a well-deserved victory by scores of 116-112, 115-113 and 114-115.

Despite the ludicrous nature of the numbers, the home favourite seemed pleased enough with his work. “I’m over the moon it’s been put to bed,” he said. “I’ve said a lot of things and I don’t like him. But I’ve outworked a great athlete and it’s over.

“It’s been a long camp, twelve weeks. He was pacing himself and he looked at the belly and thought I would tire. But I don’t tire at cruiserweight.”

“I said it would be a replica of the first fight,” said Cleverly (28-2, 14 knockouts). “A split-decision shows my character. He was using his natural strength.

Certainly, there are questions still to be answered. And whether Bellew (23-2, 14 KOs) now pursues a shot at WBO world cruiserweight champion Marco Huck or not, one senses there remains unfinished business with Cleverly, if only to suss the mystery of the Welshman’s missing right hand.