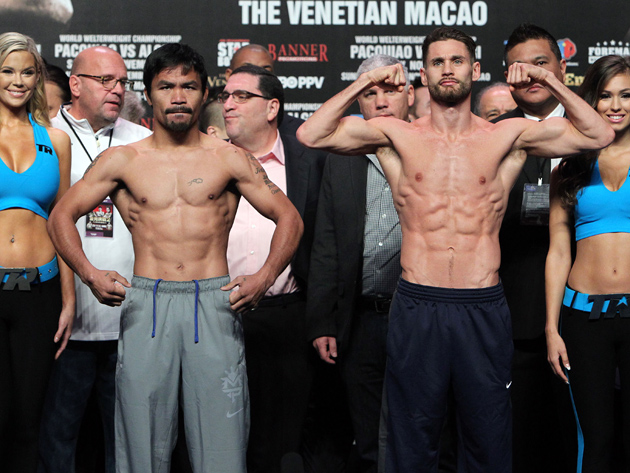 MACAU – Manny Pacquiao came in at 143.8 pounds, slightly under the contracted catchweight of 144 pounds for his WBO welterweight title bout against Chris Algieri, at the weigh-in, while the challenger weighed slightly over at 144.2 at Saturday morning’s weigh-in at the Cotai Arena at The Venetian Macau.

Algieri posted a Twitter photo of his breakfast prior to stepping on the scales, suggesting he may have been too confident about making the weight. After shadowboxing briefly, Algieri returned to the scale and checked in at 143.6.

Pacquiao’s weight is his lowest since his third bout with Juan Manuel Marquez in 2011 as he tests the waters lower on the scale with eyes on campaigning at junior welterweight should he be successful in this fight.

Pacquiao (56-5-2, 38 knockouts) is looking to win his third straight fight since a disastrous 2012 when he lost back-to-back fights for the first time in his career, while Algieri (20-0, 8 KOs), of Huntingon, New York, is coming off the biggest win of his career, an upset of Ruslan Provodnikov in June to win the WBO junior welterweight title.

Chinese standout Zou Shiming (5-0, 1 KO) and his Thai opponent Kwanpichit Onesongchaigym (27-0-2, 12 KOs) had no trouble on the scale, both making 112 pounds on their first try. Promoter Bob Arum says the plan is to match the two-time Olympic gold medalist Shiming with IBF flyweight titleholder Amnat Ruenroeng on Feb. 14 in Macau if Shiming is successful.

The WBA’s “regular” junior welterweight titleholder Jessie Vargas checked in exactly at 140 while former lightweight titleholder Antonio DeMarco was 139.6 on the scales in his first title shot since moving up. Vargas will be making his second title defense. [Editor’s note: THE RING only recognizes Danny Garcia as the WBA 140-pound champ.]

WBO featherweight titleholder Vasyl Lomachenko (2-1, 1 KO) and his opponent Chonlatarn Piriyapinyo (52-1, 33 KOs) both weighed in at the limit of 126 pounds.