Wladimir Klitschko shows Kubrat Pulev that he’s the best, but is he great? 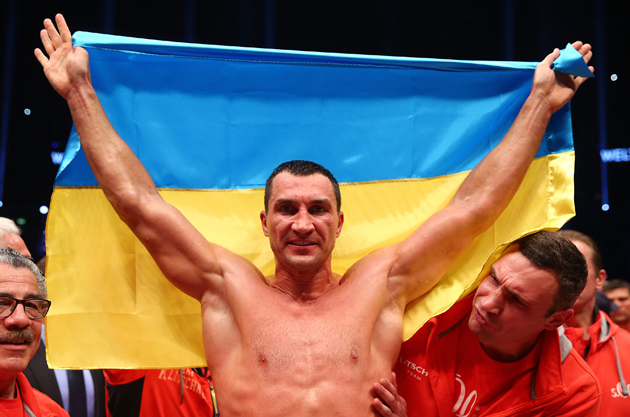 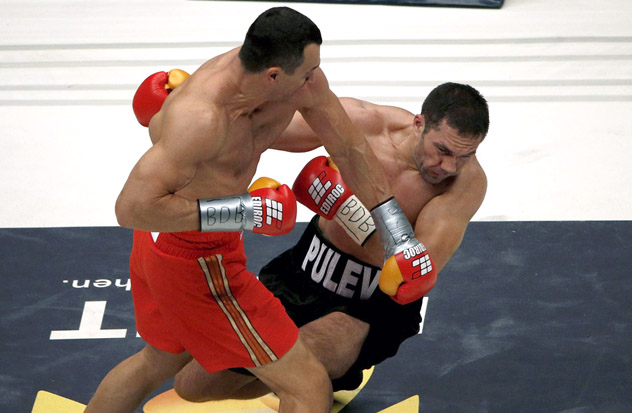 Kubrat Pulev was more than the IBF’s mandatory challenger for RING heavyweight champ Wladimir Klitschko. The undefeated Bulgarian was recognized as the No. 1-rated heavyweight contender by every credible boxing writer and publication, including THE RING magazine, going into their showdown in Hamburg, Germany on Saturday.

Pulev, a 33-year-old former amateur standout based in Germany, earned his status with a 20-bout unbeaten streak that includes impressive late-round stoppages of Alexander Dimitrenko and Alexander Ustinov, as well as a decision over American spoiler Tony Thompson.

So what did Klitschko do on Saturday? He dominated Pulev.

If there were any doubts about Klitschko’s ability or his iron grip on the sport’s glamour division going into the fight, they were put to rest by the four knockdowns he scored en route to stopping Pulev at 2:11 of Round 5.

Each knockdown was scored by quick, compact, deadly accurate left hooks in Rounds 1, 3 and 5. Klitschko’s hook was his key weapon against Pulev. Sometimes the punch was set up by big right hands, sometimes off the jab, and sometimes they were lead shots (which is really seen among big men).

The first knockdown badly rattled Pulev, but the challenger gamely got to his feet, stood on one foot and stuck his tongue out in an expression of defiance. Klitschko (63-3, 53 knockouts) put him down again as soon as referee Tony Weeks resumed the action as if to let Pulev know the price of such an attitude.

But some credit must be given to Pulev. He didn’t show up to collect a pay check or to merely go the distance with Klitschko. He came to win. A lot of heavyweights would have stopped trying after the two knockdowns in Round 1, most would have packed it in after getting rocked with the monster right hand Klitschko connected with in Round 3, shortly before dropping Pulev a third time.

However, Pulev, who initiated his share of mauling tactics and clinches during the fight, got up from the first three knockdowns with his will to win intact. In fact, Pulev tried harder after Round 3, and he even found some success with his right hand and one-two combinations in Round 4 and at the start of Round 5, but Klitschko ended matters with a chilling knockdown that was the result of a leaping lead hook.

Pulev, who sported bloody welts under both eyes, was laid out flat on his back, humbled by the guy he disrespected during the build up to the event but at least he came to fight.

Props to the challenger but more credit is due the champion.

At age 38, and after 66 pro fights, the Ukrainian star shows no signs of wear and tear, nor does he appear to be slowing down or losing focus. Klitschko remains the king of the heavyweight mountain and is without question the division’s most dominant champion since Lennox Lewis.

Lewis, who was inducted into the International Boxing Hall of Fame as soon as he was eligible, is considered an all-time great heavyweight by many historians and boxing pundits.

That, of course, begs the question: Is Klitschko great? He’s good enough to make the argument.

Klitschko, whose current title reign is in its eighth year, has the kind of stats that puts him up there with the all-time greats. Since winning the IBF title against Chris Byrd in April 2006, Klitschko has defended it 17 times – collecting the WBO and WBA belts, as well as THE RING championship, along the way. That tally puts him behind only Joe Louis and Larry Holmes, in terms of consecutive title defenses (and it should be noted that Louis’ all-time record of 25 is the standard for all weight classes).

When Klitschko’s brief WBO title reign is included, his overall title defense tally is 23, which is more than Holmes’ total and more than Muhammad Ali’s two-reign total of 19.

However, the quality of Klitschko’s opposition pales in comparison to the top-10 heavyweights that Ali and Holmes faced during their eras. In other words, you’re not going find someone as good as Ken Norton among today’s heavyweight contenders.

And then there are Klitschko’s three losses. The all-time great heavyweights lost fights, but they didn’t lose to the likes of Ross Puritty, Corey Sanders and Lamon Brewster – and they certainly didn’t get knocked out by fighters at that level.

So Klitschko’s greatness can be debated. But what can’t be debated is his place in the sport right now. He is THE MAN at heavyweight, and none of the top dogs in the division come close to his all-around game.

Some possess his impressive blend of speed and ring generalship, such as WBC beltholder Bermane Stiverne. Some have his imposing size, such as Tyson Fury. Some have his athleticism and crunching punching power, such as Deontay Wilder. But nobody has all of these attributes.

The only chink in Klitschko’s armor is his chin – at least that used to be his glaring weakness, along with stamina; but he’s proven his ability to go the distance during his second title reign. And most fighters who try to bum rush him and check his chin wind up like poor Pulev.

Does Klitschko have any worthy challengers? Yes, a few. Whoever wins the Stiverne-Wilder mandatory showdown should make for an interesting matchup against Dr. Steel Hammer. Stiverne, who can punch as well as he boxes, is the most talented heavyweight next to Klitschko. Wilder, an explosive frontrunner who has won all 32 of his fights by KO, has the best chance of clipping the heavyweight kingpin early.

There’s also the winner of the Nov. 29 Fury-Dereck Chisora rematch, which would make for a huge event in Europe. Fury, an unbeaten young goliath (6-foot-9, 85-inch wingspan, 250 pounds) with a gift for gab and self-promotion, has enough ability to make his size work for him; while Chisora, a fearless and somewhat imbalanced pressure fighter, would take the fight right to Klitschko (and would also make for a nice side story, having gone the distance with the champ’s older brother Vitali).

Maybe Klitschko will stick around long enough for British 2012 Olympic gold medalist Anthony Joshua to develop into a legitimate threat.

One thing is certain, the longer Klitschko reigns and the more he wins the easier it will be for his supporters to argue his place among great heavyweight champs.