Kathy Duva has big weekend with Kovalev and Mansour victories 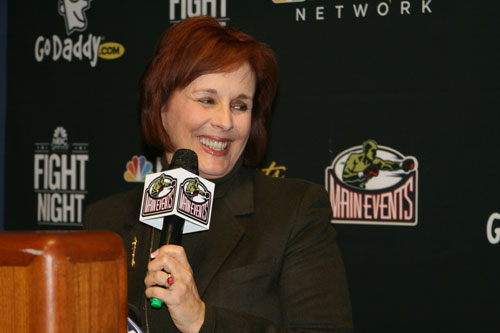 ATLANTIC CITY, N.J. – Saturday night was one to remember for Main Events and its CEO, Kathy Duva, whose organization was involved in two shows that were separated by just over two hours.

At Boardwalk Hall in Atlantic City, Sergey Kovalev (26-0-1, 23 KOs) unanimously decisioned Bernard Hopkins in a light heavyweight bout that added Hopkins’ IBF and WBA titles to his own WBO belt on HBO.

Down the road a piece in Bethlehem, Pennsylvania at the Sands Casino, Main Events’ southpaw Amir Mansour (21-1, 16 KOs) knocked heavyweight rival Fred Kassi (18-3, 10 KOs) out cold in the seventh round, ending the latter’s three-fight winning streak.

As the headliner of the NBC Sports Network’s “Fight Night” event that was promoted in association with Peltz Boxing, Mansour, 42, produced a result against Kassi, 35, which could be a candidate for “Knockout of the Year.”

The triumphs happened as part of a sentimental weekend for Kathy Duva, whose late husband, Dan Duva, would have turned 63 on Nov. 7. Dan Duva died of a brain tumor in 1996, after which Kathy assumed his role as the company’s CEO.

“It was my husband’s company and I worked with him. We were a team and we were his family and it was beautiful but this is different and it’s a different team but it’s very gratifying,” said Kathy Duva.

Duva compared Kovalev’s victory over Hopkins to that of Evander Holyfield’s third-round knockout of heavyweight Buster Douglas in October 1990, which occurred one fight after Douglas’ had earned the IBF, WBA and WBC belts with a 10th-round stoppage of Mike Tyson in February of that year.

“I remember times like when Evander Holyfield beat Buster Douglas where we felt like we did with this fight with Kovalev and Hopkins,” said Duva. “But I do remember a moment tonight when, at one point during the fight, I said to myself, ‘[Kovalev]’s mine. I built him,’ and I’m really proud of that. This is pretty sweet, isn’t it? I’m just so grateful that Sergey walked through the door because we can do that with others.”

On site in Bethlehem were Main Events staffers Joe Rotunda, Jonathan Gonzalez and Brian Adams as well as Nicole Duva, Duva’s daughter and the vice president of marketing and general counsel. Among those in Atlantic City were CFO Kim Newman, Director of Multimedia Operations Alexis Mann and Logistics/Travel Coordinator Matt Delaglio.

“Nicole traveled back and forth between [Bethlehem and] AC all week – finally landing in AC late on Friday night,” said Kathy Duva, who was in Atlantic City with publicist Ellen Haley and Jolene Mizzone, matchmaker and vice president of operations.

“Also, Lisa Meyer, who is our director of digital media and business affairs, started out in Pennsylvania and landed in AC with Nicole late Friday. Ellen Haley stayed in AC all week but was intricately involved in everything that happened in Pennsylvania as well. It was quite an operation and the logistics were daunting.”

But they pulled it off.

“My staff is spectacular and everybody on it is spectacular,” said Duva. “So it seems like everything has fallen into place, like it was all meant to be.”

Former featherweight and junior lightweight titleholder Jorge Linares (37-3, 24 KOs) and Javier Prieto (24-7-2, 18 KOs) will fight for the WBC’s vacant lightweight belt, this in the wake of injured beltholder Omar Figueroa Jr. being stripped and declared a “champion in recess” by the organization.

Figueroa, who turns 25 next month, has been sidelined with an infected cut that was suffered during his ninth-round stoppage of Daniel Estrada in August.

On the Figueroa-Estrada undercard, Linares scored a second-round stoppage of Ira Terry that represented his sixth straight win and his fourth knockout during that stretch.

Prieto, 27, is 8-0-2 with seven knockouts in his past 10 fights and is coming off consecutive draws with Ivan Cano in May and September. Prieto last suffered defeat in April 2012 by split decision to Robert Ortiz.

“The WBC Board of Governors has voted unanimously to support Omar Figueroa while he is recovering from an injury sustained in his mandatory title defense of Aug. 16 vs. Daniel Estrada. After the fight, his cut was infected and had to receive additional treatment,” read a statement from Mauricio Sulaiman, president of the WBC.

“He has been placed as Champion in Recess, which will allow him to take the necessary time to heal and to begin training without any time pressure. The WBC has ordered the two highest available contenders to fight for the WBC lightweight championship with the condition that the winner must fight Figueroa whenever he is ready to return to the ring. Jorge Linares vs. Javier Prieto has been ordered and is expected to be promoted within 2014.”

Prior to facing Terry, Linares, 29, out-boxed Nihito Arakawa for a unanimous decision in March.

Linares won the WBC’s vacant featherweight belt with a 10th-round stoppage of Oscar Larios in July 2007 and won three straight bouts before falling by first-round knockout against Juan Carlos Salgado in October 2009.

The loss to Salgado dethroned Linares as the WBA’s 130-pound titleholder. The Japan-based Venezuelan earned the belt with a fifth-round stoppage of Whyber Garcia in November 2008 and defended it with an eighth-round stoppage of Josafat Perez in June 2009.

Linares bounced back as a lightweight with four consecutive wins before being knocked out twice in a row by Antonio DeMarco and Sergio Thompson in 11 and two rounds in October 2011 and March 2012, respectively.

TOP RANK’S LEE SAMUELS TO BE INDUCTED INTO HOMETOWN HALL OF FAME ON DEC. 30

Top Rank Promotions publicist Lee Samuels will be honored with an induction into the Salem County Sports Hall of Fame on Dec. 30 at Salem Community College in Penns Grove, N.J., where he was once was a student.

Samuels, 67, was the recepient of the Barney Nagler Award for Long and Meritorious Service by at the 89th annual Boxing Writers Association of America’s awards dinner in April.

“So I wrote a letter to the local paper and I was called in and I got the job. That’s how I got my start. I had started reading papers diligently as a sophomore in high school and I got the job and I covered all of the high school sports. I was really just starting out.”

A publicist for Top Rank for 32 years, Samuels once said he “met [Top Rank CEO] Bob Arum in Atlantic City on a cold and wintry night. He hired me as Top Rank was launching an ‘ESPN Thursday Night Boxing’ series,” during an interview with RingTV.com.

“Since, I have had the pleasure of working with superstars and world champions and with media from all corners of the world. Life has twists and turns. My life turned when I met Bob Arum and went on to this incredible journey.”

Samuels said he expects to travel with his family for his homecoming on Dec. 27.

Junior welterweight prospect Bradley Saunders (10-0, 8 KOs) has signed a long-term promotional deal with Eddie Hearn of Matchroom Boxing and will be in action in support of the cruiserweight rematch between Nathan Cleverly and Tony Bellew at the sold out Echo Arena in Liverpool, England, Nov. 22.

“I am thrilled to be joining Eddie Hearn and fighting on Sky Sports. I had plenty of options and I definitely chose the best one for me. It’s a new chapter and I am raring to go. I am looking for big things. I don’t want anything less than being a world champion,” said Saunders, 28, whose 81-second stoppage of Ville Piispanen in June represented his fifth straight knockout.

“I played at the game in the amateurs but it is serious now. I want to bring big things to the North East. I’ve had three weeks training for the fight in Liverpool and you’ll see a change in me. But above that, in the New Year, you will see a different Bradley Saunders altogether…People didn’t want to face me last year…This time next year, I want to be competing at that top level. I am 28. I’m not a baby. There’s no need to hang around.”

KARIM MAYFIELD GETS BACK IN THE VICTORY COLUMN

Junior lightweight Karim Mayfield (19-2-1, 11 KOs) unanimously decisioned Michael Balasi (10-6, 7 KOs) in a 145-pound catchweight bout on Friday at the Longshoreman’s Hall in San Francisco, according to a release.

“Balasi is a very tough fighter and I give him props for being so durable,” said Mayfield, 33. “I hit him with a lot of hard shots and he stood his ground. I’m ready to take my career to the next level.”

Although Mayfield had lost consecutive unanimous decisions to Thomas Dulorme and Emmanuel Taylor in March and July, respectively, he owns a unanimous decision over title challenger Mauricio Herrera from October 2012.

“After losing a couple of fights, I went back to the drawing board and got a better understanding of what I need to do moving forward,” said Mayfield. “I wanted to come out tonight and dominate and that’s what I did. I’m ready to fight any of the top fighters at 140 pounds. I have no problem working my way back up the rankings.”