Bernard Hopkins: Sergey Kovalev is a ‘Fighter of The Year’ candidate 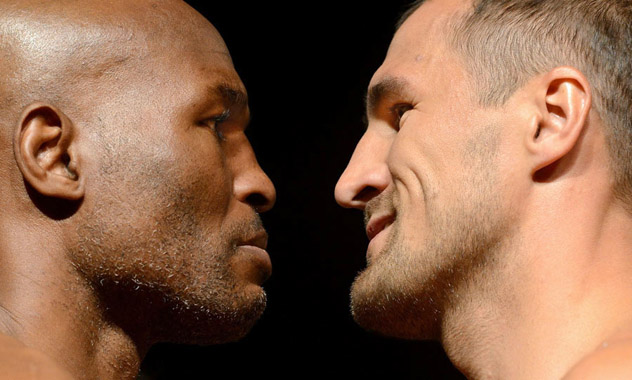 ATLANTIC CITY – Bernard Hopkins said he “felt like a middleweight or maybe a super middleweight in there with a cruiserweight” against Sergey Kovalev, whom he called “the real deal” as well as “a strong candidate for Fighter of The Year.”

After being floored in the first round and hammered over the course of 12 one-sided rounds on Saturday night at Boardwalk Hall, the 49-year-old Hopkins (55-7-2, 32 knockouts) refused to use age as a factor in a shutout unanimous decision loss that added his IBF and WBA 175-pound titles to the WBO belt Kovalev (26-0-1, 23 KOs) already owned.

“He fought a good fight…I’m not looking for a cigar for second place or for a pat on the back. I’m not because I’m not that type of guy. But I recognize what’s real and I’ve fought a lot of great fighters from the middleweights to now and Sergey’s the real deal.”

Despite injuring his left hand in the second round of the victory, Kovalev, 31, out-landed Hopkins 166-to-65 in total punches, comprised of an advantage in power shots (121-to-40) and jabs (45-to-25). Kovalev pounded Hopkins with 38 punches in the 12th, more than any other fighter in 41 bouts tracked by CompuBox had ever landed against him in a single round.

Hopkins has twice set the record for becoming the oldest man to win a major title at ages 46 and 48 and had also become the oldest man to unify. As a middleweight, Hopkins won the vacant IBF title against Segundo Mercado in April 1995 and went on to defend it a record 20 times before losing to Jermain Taylor via split decision in July 2005.

“I feel comfortable saying that as a light heavyweight champion, that if Sergey wants to stay in there and defend it, that he’s going to have it for a long time,” said Hopkins. “That’s up to him how long he wants to keep it. I kept the middleweight title for 12 years and I know right now, tonight, I can say that I’m not glad that I didn’t win but I can say that the titles are in good hands.”

One of Hopkins’ 160-pound defenses was against Kovalev’s trainer, John David Jackson, a former titleholder whom Hopkins knocked out in April 1997. Jackson served as an assistant to the Hopkins’ trainer, Naazim Richardson, for four years through 2010 and had been criticized by Hopkins prior to the bout.

On Saturday, however, Hopkins had nothing but praise for Jackson.

“What about me”? said Hopkins. “Asking me to fight right now is just like asking a woman who just went through nine months of labor whether or not she wants to have another baby.”

Some of Hopkins post-fight comments are as follows:

Bernard Hopkins on the significance of challenging Kovalev:

“We want to do big, big fights. We want to make big fights with all of the champions. This is what can happen when you put two guys in there who have pride and championship titles, whether they’re legends or new, current champions who have to build their legacy up from there.

“I can’t speak for any other promoter. At least from us, at Golden Boy Promotions, we’re looking to do big fights in the light heavyweight division and just seeing the best of the best in the ring.

“Tonight was a good night for the light heavyweight division and for boxing. This is the business side of Bernard Hopkins talking, because I have enough of an understanding of the business and the game where when we talk before the fight, you all know what it means.

“At the end of the day, this should be about I don’t duck anyone; you don’t duck anyone, and we showed that tonight. I’m hoping that we showed you tonight some entertainment. Let’s just hope that this becomes something that is very, very common in boxing.”

“It’s not even hard to really to try to explain.I couldn’t overpower him. I felt like a middleweight or maybe a super middleweight in there with a cruiserweight. I don’t know what it looked like to you all. I couldn’t get into the range that I wanted to get into and the range was the length.

That’s part of a strategy that any seasoned fighter is taught from a teacher that has been taught himself. So that’s what it was. I really couldn’t get inside to do the work that I wanted to do. I had some success but not a lot. I had some success here and there.

“But it wasn’t enough to put some early rounds in the bank and to get his respect to the point where he got off his game because he never got off his game. There was certain excitement in the end but he controlled it earlier more than I did and also to keep me from winning some of those rounds at the end.”

“Because you know that he’s got a good teacher. At the end of the day, we know that John’s been in the trenches with us and he spent many years in Philadelphia when he was champion, so that has to be respected. That’s how it played out today and you have to give him credit and applause right now because he did a fine job.”

“I think that, not taking anything away from him but one or two of his punches were flash knockdowns. It wasn’t a punch where I was all over the place. I recovered very quickly, as you know, which is why the fight went the distance, as you know.

“I just have a great chin. I can take a punch. Forget the age; even if you say that 49 is almost 50, that Bernard can take more than a punch. I’m not going to even ride on that but you all can make that assessment.

“But I’ve never been in the business to prove whether I can take a punch or not because I try to tell the fighters, including Sergey, that you don’t last long trying to take punches and trying to prove that you can take punches. Yes, we know that it’s possible to get hit trying to hit somebody.

“But to volunteer to see if you can take one, you would be a fool. If you want to stay around and be around for a long time as a champion, better to use your skills and Sergey’s got the skills. He has the time to improve.”

“I was determined to try to hit him and put him down. Did it look like I was just trying to survive in the 12th? We was rumbling. Think about it. I could have tried to hold him and grab him. which is something that other people would have tried to do, right?

“But I was trying to swing and to hopefully get some shots in where it could be changed around right up until the end and that’s what you were seeing in the 12th round. I wasn’t going to run around and hold and just do things to just see if I could survive.

“When you look at it tomorrow when it’s replayed on HBO, you will see that me and Sergey were throwing punches all the way up until the bell rings. Yes, I’m always a smart, thinking fighter first but sometimes, you’ve just got to bite down, man. I bit down and he bit down and you’ve got to respect that.”

On the factor of his age:

“My age is well-publicized. I’ll be 50 on Jan. 15. I’m closing in on it and like I said, I won’t teach my kids or anybody else to be happy with second. I don’t like to lose and my track record shows that. To say that me almost being 50 and that he won because of the age, that’s taking away from him. I don’t want to do that.

“I think that being 50 and being me, that’s different from any other fighter who has ever been in there in any era. But with a guy like Sergey, who did the game plan the way that he did, you just have to take your hat off to him.

“But I know for a fact that I don’t go out there saying that I’m 49 or 50 because it didn’t go my way because if you’re not supposed to be in there, you shouldn’t go into the ring, no matter what age you are. If you lose, you lose. So my thing is that I wanted to go in there and make history and to be the light heavyweight champion of the world. I had my shot and that’s cool. That’s what happens.”

“I’m not looking for a cigar for second place or for a pat on the back. I’m not because I’m not that type of guy. But I recognize what’s real and I’ve fought a lot of great fighters from the middleweights to now and Sergey’s the real deal.

“Tonight, he was the better man and that’s cut and dried. You can’t water that down and you can’t add anything to that. He deserves to be respected by all of the other writers. I’m going to say this in front of everybody and I don’t know how they’re going to tally things up over the next couple of months or whatever.

“But he’s a strong candidate for ‘Fighter of The Year.’ He’s a strong candidate. That’s my opinion. You know why? Because ain’t nobody out there who would have fought a fight like that with me the way that he did. He was smart; he was patient and he didn’t get caught up in any emotion when I tried to suck him in.

“That’s up to him how long he wants to keep it. I kept the middleweight title for 12 years and I know right now, tonight, I can say that I’m not glad that I didn’t win but I can say that the titles are in good hands.”

On his own future:

“What about me? Asking me to fight right now is just like asking a woman who just went through nine months of labor whether or not she wants to have another baby. “