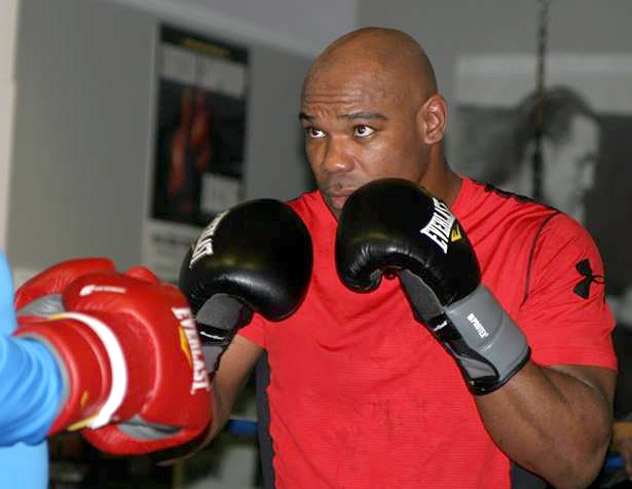 Amir Mansour was on his way to a dominant decision win over Frederic Kassi when the heavyweight puncher turned in a possible candidate for Knockout of the Year.

Mansour threw and landed one punch that knocked Kassi out cold in Round 7 at the Sands Casino in Bethlehem, Pennsylvania on Saturday.

The bout headlined a “Fight Night” card presented by Main Events in association with Peltz Boxing.

Mansour, a heavy handed southpaw who spent almost nine years in prison for trafficking cocaine, was coming off a 10-round unanimous decision loss to Steve Cunningham in Philadelphia on April 4.

But on Saturday it was all Mansour from the opening bell as he landed the more telling blows throughout the fight. Mansour landed wild, yet effective crosses and hooks to the Kassi’s head.

In Round 7, Mansour forced Kassi back against the ropes. Mansour missed a left cross to the head, but followed up with a right hook to the head. Kassi dropped hard face-first to the canvas and laid motionless, promoted referee Gary Rosato to immediately wave the fight over 2:17.

After a few tense minutes with medics by his side, Kassi eventually stood up under his own power.

Dmitry Mikyanlenko scored an impressive technical knockout over Ronald Cruz after Round 8 of a 10-round junior middleweight bout.

Both fighters took the fight to each other from the opening bell. Both had their moments in the first two rounds as they stayed in the pocket, raining down combinations on one another.

Cruz, who was working with Philadelphia trainer Billy Briscoe for the first time, began to beat Mikhaylenko to the punch in the third and fourth rounds. Cruz was able to do so holding his ground and at times backing the Russian fighter up.

Mikhaylenko swung momentum in Round 5 in his favor. He was able to create space between himself and Cruz by landing hard right hands to the head. As the bout progressed, Mkihaylenko’s punch output increased, while Cruz began backing up and saw his punch output decrease.

With a cut above his right eye and swelling around that same eye, trainer Billy Briscoe told referee Steve Smoger after the eighth round to stop the fight.

Lepikhin get nod over Junior

Undaunted, Junior was able to get on the inside of Lepikhin’s guard. Junior was at his best when he had Lepikhin backed up against the ropes, where he landed to the head and body. Some of the punches were blocked as Lepihkin held his hands up to his head, Lepikhin tried to look for openings, but would smother himself as Junior kept the fight on the inside.

There were some good exchanges between the two in the second half of the fight. Junior tried to land lead right uppercuts, while Lepikhin tried to counter with left hooks. As the fight progressed into the later rounds, the action got somewhat sloppy. It was Junior who was effective at pressing the fight and controlling the tempo, while Lepikhin looked somewhat tired as the fight made.

The Russian-born Lepikihn goes to 17-0, 9 KOs. Junior officially drops to 15-1, 13 KOs. Junior lost to Umberto Savigne in March of last year, but the decision was changed to a no-contest when Savigne failed a post-fight drug test.