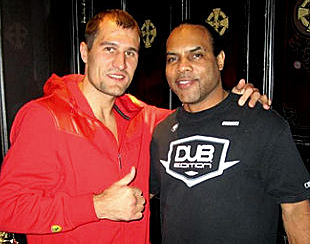 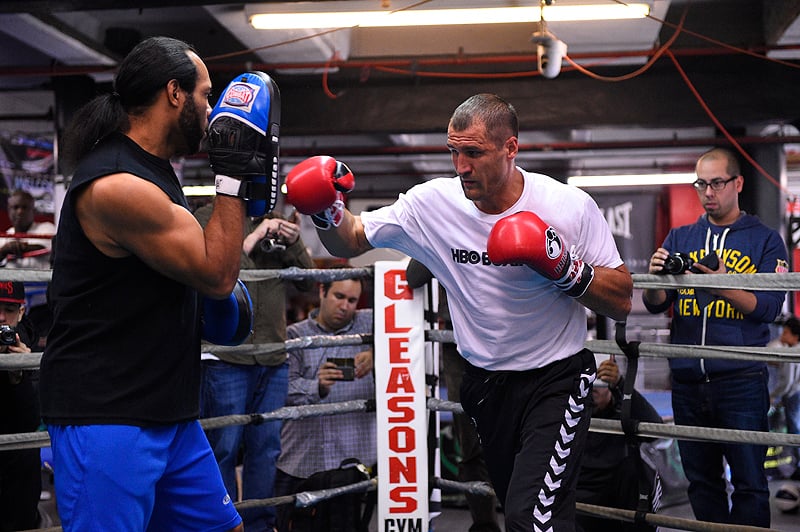 ATLANTIC CITY — What is something that Jermain Taylor, Roy Jones Jr., Joe Calzaghe and Chad Dawson have in common? They are four of the five men who have beaten Bernard Hopkins.

On Saturday night at Boardwalk Hall, Sergey Kovalev (25-0-1, 23 knockouts) will look to become the sixth.

Kovalev’s trainer, John David Jackson, believes that his man can whip Hopkins, pointing out that his 6-foot fighter shares the height, speed, boxing skills and athleticism of the men who have vanquished Hopkins.

“It’s not so much that they’re long. But it’s their athleticism,” said Jackson. “Sergey has all of that and one other thing: He has natural punching power. The one thing that they did not have was that natural knockout power that can really hurt Bernard.”

WBO titleholder Kovalev, 31, is coming off a second-round stoppage of Blake Caparello, whom he floored three times after being dropped himself in the first round.

“If you take Bernard’s past few fights — Shumenov, Murat and Cloud — those guys are all very robotic,” said Jackson. “They come straight at him, and wherever Bernard went, that’s where they went. Bernard was able to dictate the fight …

“But if you take a Dawson, a Calzaghe, and, to a degree, a Jean Pascal for the first five rounds of their first fight, they were more athletic than Bernard. Even though he’s crafty, he’s old, and that showed up in the fights against them. Their athleticism took over at times, and the jab of Jermain Taylor hurt Bernard in their fight. A jabber can give Bernard a lot of trouble, and this kid, Sergey, is a thudding jabber.”

Jackson served as an assistant to the Hopkins’ trainer, Naazim Richardson, for four years through 2010. During that time, Hopkins scored two of his defining victories at Boardwalk Hall: a unanimous decision over Antonio Tarver in 2006 and another against Kelly Pavlik in 2008. Nicknamed “The Executioner” at the time, Hopkins was an underdog trying to rebound from a loss heading into each of those wins.

But Jackson himself has failed against Hopkins, who won the vacant IBF middleweight title against Segundo Mercado in April 1995 and went on to defend it a record 20 times before losing to Taylor by a split decision in July 2005.

One of those defenses was against Jackson, whom Hopkins knocked out in April 1997.

“John David Jackson says he knows everything there is to know about me. Sergey is the student. I’m not fighting John,” said Hopkins during Thursday’s final press conference. “But how can a teacher have credibility when the teacher has all F’s? How can a teacher teach a student to have all A’s when he has an F? I guarantee John did not show our fight to Sergey.”

Jackson said he was not bothered by Hopkins’ comments.

“A reporter asked me, ‘John, should Sergey win, is this revenge for your loss?’ I said no, because I’m a fighter first and foremost, and Bernard is not fighting me. The only way that I can get revenge is that if I fight and beat Bernard. So this is nothing for me, personally, this is Sergey’s fight. Now, I will get gratification if he wins and if he does what I ask him to do, but it’s never been for me. I lost, I’m gone and I can never get that back,” said Jackson.

“I’ve buried that past with Bernard, so this is for the kid and not for me. I’m for my guy, but I don’t have any ill feelings for Bernard. I like him. He’s my guy. When it comes to me, I’m okay. I have no problem with that. But I do believe that I did get into Bernard’s head because of the comments I’ve been making. I’ve been telling the truth about this fight, because if I didn’t he wouldn’t have any issues. But I know that I’ve gotten to him.”

Kovalev also claimed to be unaffected by Hopkins’ behavior, and Jackson agreed.

“Bernard couldn’t get into Sergey’s head, so he tried to get into my head. But like I told him, I’m not the one who is fighting him, this kid is, and he doesn’t really understand English,” said Jackson.