Kovalev looks to unify titles, then meet his own son for the first time 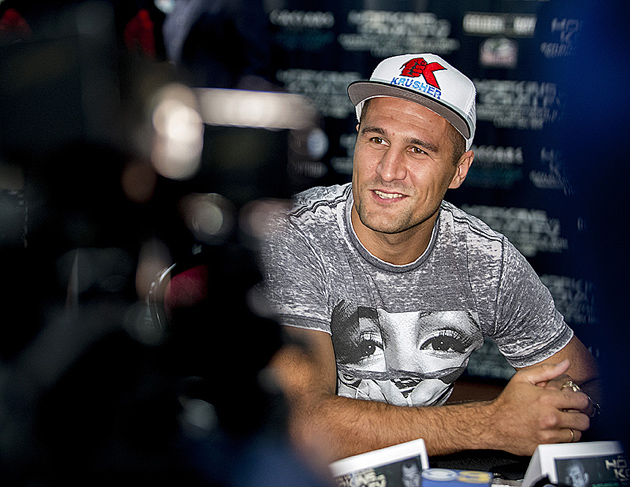 ATLANTIC CITY – When Aleksandr Kovalev was born on Oct. 20 in Los Angeles, his father, Sergey was on the other side of the country training in Fort Lauderdale, Fl.

So when Kovalev steps into the ring to defend his WBO light heavyweight title against his IBF and WBA counterpart Bernard Hopkins at Boardwalk Hall, it will actually be prior to holding his son in his arms for the very first time.

“That’s true. His son was born after Sergey had left for camp in Florida on Oct. 12,” said Kovalev’s manager, Egis Klimas. “Sergey was so dedicated to the fight, that he chose not to disturb his camp and go to see his son and then come back to train. So he’s going to go after the fight to see his son.”

Missing Aleksandr’s birth is one thing but on Thursday, Kovalev vowed to Klimas that he would be there for the remainder of his son’s life.

“We were together yesterday and we spoke about the fact that he never had a father figure probably since somewhere before he was even 10 years old. He started telling about how poor his childhood was,” said Klimas. “He didn’t have a dad growing up but now, he is determined and he has a reason to live and to show his son what this whole life is about. He’s very dedicated about that and looking forward to being a good father.”

“I was in California,” said Klimas. “I went to the hospital after his son’s birth the next day. His looks are very close to his dad’s although I never saw Sergey as a kid.”

Inspired by Aleksander, Kovalev expressed his new determination during a conference call the day after his birth.

“Nov. 8 is one more fight that I’m going to win and give this victory to my son, Aleksandr…Am I focused for this? Yes. My baby was born yesterday. I will always remember this,” said Kovalev, 31. “My son has pushed me more and it’s a big motivation for me. Now I understand for who I am doing everything in my career. I’m doing this not just for me but I’m doing this also for my family.”

Kovalev (25-0-1, 23 knockouts) is coming off a a second-round knockout of Blake Caparello in his last fight in August, rising from a first-round knockdown to score two of his own. In victory over Caparello, Kovalev earned his 13th knockout in 14 fights, including a fourth-round stoppage that dethroned previously unbeaten WBO beltholder Nathan Cleverly in August 2013.

Already the oldest man to win a major boxing title, Hopkins, who turns 50 in January, first set the record at the age of 46 by outpointing Jean Pascal for the WBC’s title in May 2011 before being dethroned via majority decision loss to Chad Dawson in April of 2012.

In his most recent fight in April, Hopkins also became the oldest fighter to unify a pair of titles with a unanimous decision over Beibut Shumenov. In that fight, Hopkins dropped Shumenov in the 11th round, adding the latter’s WBA belt to the IBF title he already owned.

In his previous bout in October 2013, Hopkins unanimously decisioned Karo Murat in defense of the IBF belt he won by unanimous decision over previously unbeaten Tavoris Cloud in March 2013. The win over Cloud extended his record.

“All roads lead to this fight. This is a huge fight in my career and in my life…Bernard Hopkins is a legend. He is a professor of professional boxing,” said Kovalev.

Then the man who has stated that “My hands are my weapons,” will use those same hands to hold his own son.